As part of the 2019–2020 FPCJ Fellowship Program, NRC Handelsblad journalist Ms. Hanneke Chin-A-Fo visited Japan from January 19 to 28. NRC Handelsblad, founded in 1970, is a quality daily paper with the largest circulation in the Netherlands. During the trip, Ms. Chin-A-Fo covered whaling, climate change, employment of seniors and people with disabilities, and the development of technology for seniors and people with disabilities. She interviewed government officials, professors, and other experts, as well as visiting Lake Suwa in Nagano and the port of Ayukawa in Ishinomaki, Miyagi, where whaling has traditionally been carried out. At the end of the fellowship, Ms. Chin-A-Fo commented, “I was able to speak with government officials about each topic, as well as those people directly involved, such as with Ayukawa whaling, so it was a very fruitful fellowship.” 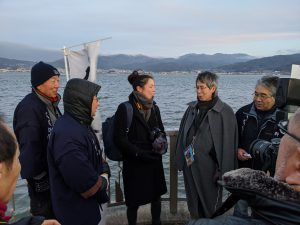 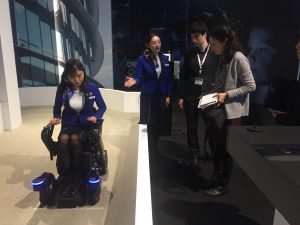 Photo: At the Panasonic Corporation’s Panasonic Center, listening to an explanation of technology developed for seniors and people with disabilities

*Reporting based on this fellowship

Published in paper on February 18,  "Risico Hawaija-aanval was bekend"（”The oldest weather records in the world）