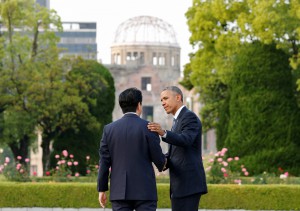 Asahi: After Hiroshima, Obama needs to follow up with specific actions

Mainichi: Obama’s Hiroshima visit a new starting point for a world without nukes

On May 27, President Obama became the first US president to visit Hiroshima while in office. He gave a speech in front of the Cenotaph for the Atomic Bomb Victims, and restated his resolve to work towards a nuclear-free world. In their May 28 editorials, the five national dailies praised this historic visit, but also noted that a nuclear-free world seemed significantly farther away than when Obama gave his 2009 speech in Prague, and argued that Japan should take a leadership role to achieve a nuclear-free world.

Although the Sankei did not, the other four papers ran expanded editorials, devoting a similar amount of space as for the G7 Ise-Shima Summit, and demonstrating the extent of public interest in this historic visit to Hiroshima by an American president. In general, all the editorials had a similar tone, arguing and analyzing the same major points: 1) Praising the visit, 2) Discussing an apology for the atomic bombing, 3) Nuclear disarmament and dependence on the nuclear umbrella, and 4) Reconciliation between Japan and the US, and Japan’s future role.

■ Praising the Visit to the Site of the Atomic Bombing

Although there was some variation in how strongly it was worded, each of the papers praised the visit to Hiroshima as a “historic visit.” Respectively, the papers wrote: “The fact that the leader of the country responsible for the attack reflected on the scourge of war in the city that was enveloped in a mushroom cloud will go down in history as an important chapter in the nuclear age” (Asahi), “We would like to think of this as a historic opportunity to vow as allies to work towards ensuring the world does not face the horror of nuclear weapons again” (Sankei), “This visit was meaningful not just to Japan and the US, but to the world as a whole” (Nikkei), “Opposition to and caution over Obama's visit had surfaced in the U.S. We want to voice support for his decision to overcome various obstacles and visit Hiroshima” (Mainichi), and “Standing side by side, the head of the only nation ever to have used an atomic bomb and the leader of the only nation ever to have suffered the effects of one pledged peace together. The implication of this is important. We would like to commend the historic first visit by a sitting U.S. president to ground zero” (Yomiuri).

However, President Obama made no apology for the August 1945 atomic bombings of Hiroshima and Nagasaki, and made no statement on whether the bombing was justified. All the dailies declared their stance that the debate over the moral responsibility of the bombings still exists, as indicated by comments such as “Japan did not ask for an apology, but that does not mean the country has condoned the inhuman act of atomic bombing” (Yomiuri) and “The atomic bombings of Hiroshima and Nagasaki…were unforgivable” (Sankei). The Mainichi also stressed “Whether or not to apologize is probably largely a U.S. issue. But if this point is made light of, then U.S. logic will probably always lack a touch of humanity.”

The Sankei, Nikkei, and Yomiuri take a realistic position, recognizing the fact that popular opinion in the US general holds that the atomic bombings were justified in order to end WWII more quickly and that the president would be unlikely to visit Hiroshima if an apology was required. Saying that Obama’s remarks during the Hiroshima visit “had an underlying understanding of the inhumane nature of nuclear weapons and the atrocity of war” (Yomiuri), the papers presented their view that not having an apology could not be helped. The Nikkei was more positive, stating that despite the lack of apology “This will be a step to further reconciliation between Japan and the US, as two countries that once fought each other overcome that dark history.”

The Asahi also accepted the lack of apology in general; “In the United States, many people argue that the atomic bombings were justified on grounds they ended the war quickly and saved many lives. Obviously, Obama had to give careful consideration to various views and opinions about the issue among his fellow citizens.”. On the other hand, it noted the disappointment of hibakusha (atomic bomb survivors):

■ Dependence on Nuclear Umbrella and Moving Forward with Nuclear Disarmament

Opinions were divided over the issue of dependence on the US’s nuclear umbrella. The Sankei, Nikkei, and Yomiuri pointed out its importance for Japan’s national security, with negotiations over nuclear disarmament between nuclear weapon states “regressing” (Nikkei) or “at a standstill” (Yomiuri) since the 2009 Prague speech.

In particular, the Sankei mentions China’s focus on building their nuclear arsenal and North Korea’s continued nuclear and missile tests, arguing that “The nuclear weapons of neighboring countries are a real threat, and this situation means the nuclear umbrella the US provides is becoming even more important.” The Nikkei also stated “In the current situation, surrounded by nuclear powers, it is not possible to remove the American nuclear umbrella immediately…it is the responsibility of Japan to open the way forward for nuclear disarmament.”

The Yomiuri also declares “The nuclear umbrella provided by the United States for its allies, including Japan, functions effectively as a deterrent,” and regarding a convention banning nuclear weapons, which has been progressing in the UN mainly due to efforts by non-nuclear states, the paper urges caution: “A realistic approach would be to push ahead with nuclear disarmament in phases, while taking the security environment into consideration.”

On the same subject, the Asahi stated that “Japan participated but remains reluctant to support calls for a treaty to ban nuclear arms,” noting Japan’s passive stance towards a treaty banning nuclear weapons. Regarding the nuclear umbrella, the paper proposed “Japan and the United States should start talks to figure out ways to diminish the role of nuclear arms in national security. The two nations should together tackle the challenge of designing and building a security regime that is not dependent on nuclear arms.” For some reason, the Mainichi does not mention the American nuclear umbrella.

However, of the reconciliation and friendship Obama demonstrated with this Hiroshima visit the Asahi said “But true reconciliation can be achieved only after serious efforts are made by both sides to understand the feelings of the other and move closer to each other,” and stated that “From this point of view, Obama’s trip to Hiroshima should be regarded as just a first step, even though it was a big step.”

All the dailies made comments such as “it is the responsibility of Japan to open the way forward for nuclear disarmament” (Nikkei), looking to Japan to demonstrate leadership as a mediator and facilitator between nuclear powers and non-nuclear powers.