Magazine Articles of the Month: The Corona Crisis and Civilization 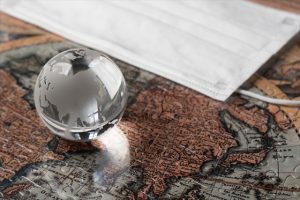 It has been said that future historians may split the current era into before and after the “corona crisis.” The corona crisis is developing into a catastrophe of historical importance that could mark a new era, and will have an effect on a wide range of fields as it impacts not only medicine and healthcare, but also how people work and think, how markets operate, the adoption of new technology, and even fundamental ideas about civilization. Therefore, the major, long-term change that will occur going forward may be more extensive than we can imagine. How will the world change through the corona crisis, and what response will Japan need to take?

The July issues of major Japanese magazines ran a number of articles about the connection between the corona crisis and civilization, with a focus on the unique characteristics of Japan in that respect.

A common thread in the opinions of the pundits introduced here is a hope for renewed recognition of or a return after the corona crisis to values developed throughout the course of Japanese history, such as “impermanence as a world view,” “perspectives on life and death,” “a kind of resigned acceptance of coexisting with infectious disease,” or “the semantic space value of real human interactions.” In that way, as the corona crisis moves towards its conclusion, this brief, unique experience could be considered a catalyst to examine the different characteristics of Japanese civilization compared to Western civilization.

Yamazaki suggested that the corona crisis was like a splash of cold water to the hidden arrogance of modern humanity, and would drive a return to past civilization and history since the advent of urban civilization. He noted, “We thought modernity broadened the space of the world and achieved globalization, but with this virus then covering everywhere, it is no different from pre-modern villages in the sense that there is nowhere to run.” He predicted that humanity would become leery of globalization run amuck in the future, in particular becoming critical of massive global companies challenging nations. He also suggested that once nations broke free from this morass, they should quickly deal with the issue of equality for future generations, and deal with the debt to the future that has grown to astronomical levels.

Yamazaki argued that the reason infectious diseases cause such incredible fear and uncertainty in people is because pathogens and routes of transmission are hidden in the darkness, with no indication of how long this fear will continue, and there is no action people can take in response. He commented that there was significant depth to the emotions of Japanese citizens as they endured, and their restraint deserved special praise, but it was unclear whether these virtues of Japanese people would be able to overcome this national crisis and safely reach the final phase. He also stressed that now was the time to think about what kind of world to leave for the future after the crisis passes.

He further commented that the changes to the worldview of individual Japanese citizens that would begin in the future was important, and admitted that he hoped people would give up on the ideology of progressivism in which civilization wins in negotiations with nature, stating, “I hope this experience will lead to a revival of a traditional Japanese worldview and sensitivity viewing reality as impermanent.” He explained that this sense of impermanence is not some form of sentimental nihilism, but a healthy ideology for Japanese citizens, an enlightened sensitivity to recognize their efforts as impermanent even as they apply their knowledge and skills to changing reality.

“Modern science and Japan’s challenges—How to anticipate the post-COVID-19 future, and how to pay the debts”

Murakami suggested that one of the vulnerabilities of modern society which the COVID-19 pandemic exposed might be people’s stance towards life and death, commenting, “If people think seriously about how to live their life each day with death as a part of daily life, then perhaps there was some meaning to this calamity.”

He also stated that as the pandemic nears its end, “After experiencing how information can easily spread on the internet no matter how ridiculous it is, maybe people will gain at least some knowledge of how to determine the veracity of information online.” He argued that this crisis could be an impetus to carry out the continued work necessary to reach this end, by having common sense and decency take root in society, along with basic education.

Murakami noted that with this crisis, a sudden lack of income led to people below the poverty level growing to numbers that cannot be ignored, forcing people to recognize anew the division in society based on livelihood. In order to solve this issue, he proposed that, instead of increasing the burden on public finances, a temporary tax should be placed on those members of society who need not worry about having no income tomorrow and be distributed to the other members of society as an emergency measure, but also warned of the possibility that this solution could lead to a very dark future for Japanese society.

Oshitani stated his conclusion that Japan’s strategy to stop the spread of infection was to “see the forest and get a grasp on the overall situation,” while Western countries’ approach was “seeing the trees.” Western countries focused on investigating who infected people had come into contact with, and eliminating the virus one by one as they found new cases, but since the rate of transmission was very low, and there was also asymptomatic transmission, this was not very effective in stopping the spread of infection, making it an inefficient battle of attrition. In contrast, he noted how Japan would overlook smaller cases of infection to a certain degree and instead focus on care around clusters, as without clusters the chain of infection can be mostly broken.

He suggested it was meaningful that while developed Western countries with a culture of completely eliminating the threat of infectious diseases were all in dire straits, Asian and African countries with the “pensée sauvage”-like idea of coexisting with infectious diseases had managed to stand firm. In Japan, people have suffered from infectious diseases such as smallpox repeatedly since the eighth century, and, recognizing that there are powers beyond the capabilities of human understanding, have reached a degree of acceptance. Oshitani continued that a similar kind of resigned acceptance of coexisting with infectious diseases was present throughout Asian societies. However, he also noted that those countries, including Japan, China, South Korea, Taiwan, and Vietnam, all found success with entirely different strategies, and proposed that a new style of international cooperation should be rebuilt based on the understanding that a uniform approach would no longer work.

■Voice, July Special feature: The New Nihonron (theories on Japan) in the Age of COVID-19

Nakanishi commented that this pandemic made it clear that there were limits to humanity’s medical capabilities, with many of the growing number of emerging infectious diseases having no effective vaccines or medicines available for treatment. He stated that COVID-19 was a virus that engaged in guerilla warfare, attacking societal vulnerabilities which had accumulated as globalization damaged diversity by making society as efficient as possible with the logic of capital as its sole standard for value. Nakanishi suggested that this exacerbated pre-existing political, economic, and societal divisions, and predicted that as it continues fundamental conflicts such as “healthcare or the economy” or “public safety or privacy” will become more radicalized.

Although the pandemic provided an opportunity to demonstrate the power of digitization and the virtual world, Nakanishi predicted that it would also encourage recognition of and an increase in the semantic space value of real human interactions in areas which cannot be replaced with information technology, such as healthcare, caregiving, logistics, and culture.

Nakanishi stated that it was not possible to digitize all of human society, and that determining what to digitize and what should be separated from or combined with analog elements which humans excel at will be a question for the world as a whole to answer. He pointed out that Japan could contribute to the world by honing its own initiatives in this area even further. He concluded by commenting that Japan would need to analyze its own strengths and weaknesses based on universal standards, and then establish a plan for the future.