Magazine Articles of the Month: The Post-Coronavirus World 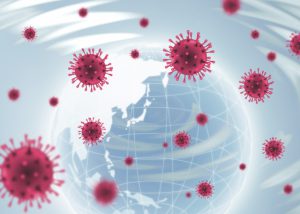 Countries around the world have taken measures against the COVID-19 pandemic including lockdowns and various voluntary restriction, but with the recent decline in the number of infections, there has been a growing movement towards relaxing these measures despite some protests. Countries are clearly struggling to strike a balance in their policies between prioritizing people’s lives and the economy which sustains their livelihood.

In Japan, the government made a state of emergency declaration in April, and then initially extended the declaration until the end of May for the entire country.  However, as the number of infections declined, on May 14 and 21 the declaration was progressively lifted for a total of 42 of Japan’s prefectures, excluding Tokyo and four other prefectures: Kanagawa, Chiba, Saitama, and Hokkaido. The number of deaths from COVID-19 in Japan is around 700 (as of May 15), a significantly lower level than in various Western countries.

The June issues of Japan’s major magazines have shifted their focus towards the world after the coronavirus pandemic has abated. Articles include opinions from pundits on whether it will be necessary to coexist with COVID-19 in the long term even after this pandemic is over, whether the trend towards globalization will reverse, whether there will be increased conflict between the US and China and if China will become a hegemony, and whether increased digitalization will lead to the arrival of a surveillance state.

“Roundtable discussion: Will this be the end of Pax Americana? Post-coronavirus geopolitics”

Considering the post-coronavirus world from an international politics or geopolitical viewpoint and commenting on the conflict between the US and China, Suzuki stated that it had become obvious that “decoupling is a fantasy,” declaring, “Since the US cannot make what it needs by itself, it is unrealistic to continue with decoupling.” Takuma agreed that the codependent relationship between the US and China could no longer be untangled at this point, and argued that the US would have to find a compromise between its need for China and its hostility towards it.

Suzuki stated that the power balance between liberal democratic societies and authoritarian states was changing, and that people should remember that when situations such as this pandemic occurred, there would be growing belief in the effectiveness of authoritarian systems enabling states to implement heavy-handed measures. Hosoya stated that laissez-faire measures were not enough to deal with this kind of crisis, and could lead to a significant loss of trust in Anglo-American liberalism and provide China with an opportunity to achieve a hegemony, arguing that COVID-19 might become a major historical turning point.

Three scenarios were presented for a post-coronavirus world: 1) Restored international cooperation with international organizations such as the WHO playing a central role, 2) Leadership by advanced Western liberal democracies such as the G7, and 3) China becoming the dominant world power. Suzuki commented that there were issues remaining with all those scenarios, but that for a state to become a hegemony it was vital to have some sort of aspiration or ideal, and so China would not be gaining a hegemony yet. Takuma predicted that instead of any of those scenarios, there was a significant possibility that the world would enter a rather unstable era without a hegemony, considering frequent criticism that China covered up the virus through its authoritarian system and led to the global pandemic. She explained that the response to this pandemic also amply demonstrated the negative aspects of authoritarian systems.

Feature: The Pandemic and the US-China High-tech Hegemony

Todo suggested that the decoupling of the US and China’s economies, which was already underway before the coronavirus pandemic, was now proceeding at a higher pace, and the decline of globalization was quite likely to continue in the future. He gave three reasons: 1) Companies around the world have seen manufacturing drop due to COVID-19, and there are issues with procuring parts from overseas, creating renewed awareness of the economic risks of globalization; 2) More and more Western countries have been taking exclusionist policies due to the perception of China as the origin of COVID-19 causing distrust and anti-China sentiment; and 3) Dependence on China is being reconsidered in a variety of industries, such as the pharmaceutical industry, from a security perspective.

However, Todo argued, “In order to have a V-shaped recovery from the economic damage caused by COVID-19 and prepare for the next economic shock, it is necessary to expand globalization, not shrink it due to fearing damage from the pandemic.” He stated that the true benefit of globalization was the spread of knowledge beyond national borders leading to increased innovation, as well as reducing risk by spreading production and procurement throughout the world.

He proposed reducing Japan’s excessive dependence on China, and, instead of domesticating everything, joining with Western countries, South Korea, Taiwan, and Australia in multilayered networks including supply chains, joint research, and financing. To build a strong network based on trust, it is important to help the others when they are in need, and when looking forward to the post-coronavirus world, now is the time to provide aid for countries around the world suffering in this pandemic.

Mitachi argued that our current age consists of two ages existing in parallel, an age of building industrial societies and the beginning of the age of digital societies. The COVID-19 pandemic and the chaos caused by it spread throughout the world due to globalization by industrialized societies, and there is a high chance that in the future there will be a pandemic caused by a different virus. He suggested that it was very likely remote work and the digitalization of education and public services would progress in the near future, but since we are near the last stage of the industrialization of societies the problems common to them have become more obvious. By considering this scenario where a major panic was caused when combined with the COVID-19 pandemic, leaders must consider other similar scenarios ahead of time and take preventative measures.

In response to the question of whether a reversal of globalization was inevitable, Mitachi commented, “The globalization of knowledge, a common good for humanity as a whole, must be carried on with determination, and it is possible to do so.” While stating that sovereign nations have clearly been regaining authority with their responses to the pandemic, he also pointed out how the globalization of knowledge was also being carried out at an incredible pace, giving the example of how large numbers of studies by Chinese scientists were being carried in top Western journals. While mentioning that the redomestication of supply chains was likely to come up in discussion more frequently with the dispute between the US and China, he argued to avoid the foolishness of putting all your eggs in one basket and work towards a third option simultaneously allowing both centralization and decentralization.

Yamanaka explained that the battle with COVID-19 would be a long marathon, and that after running at a full sprint, next it was necessary to make preparations for an endurance race. With the development of a vaccine expected to take at least a year, and fears that a foreign vaccine would have supply delays and be expensive, he stressed that the government, industry, and academia should work together to put all their efforts into developing a vaccine and medicine for treatment in Japan.

Yamanaka stated that he was certain there was some X factor leading to the spread of infections in Japan being slower than in Western countries. He mentioned that there were many possibilities for what this X factor could be, including Japanese people’s personal hygiene or cultural factors, the BCG vaccine helping to prevent infection or severe symptoms, or that many people in Japan already had antibodies, and if the nature of this X factor could be determined then the approach to dealing with COVID-19 would certainly change.

Hashimoto stated that currently, the national government was strongly urging people to stay home and requesting businesses to shut down, leading to parts of the free market stopping, and argued that the government should be providing compensation in conjunction with requests for businesses to shut down, ignoring cost and markets in order to provide funds to those people who are making a sacrifice. Saying war bonds should be issued for this fight with the virus, he declared, “If we win, great, and on the off chance we lose, then the nation as a whole can work together to rebuild from devastation. I want politicians to approach this new virus with that level of determination.”

Yamanaka also noted that in this kind of situation, responses could be “excessive,” “insufficient,” or “just right,” but that it was difficult to implement a response that was just right, and given the other two options, excessive was better, as the excess could be dealt with later. He warned that choosing an insufficient response would cause a collapse of the healthcare system, leading to countless deaths which cannot be dealt with later.


Sato argued that even in Japan, it was theoretically possible to use laws and ordinances to limit the movement of people, and the reason the national and prefectural governments did not do so was because, first, they would have to deal with people seeing them for constitutional violations, and second, calling for voluntary restraint would be as effective as implementing laws or ordinances. He stated that in the current circumstances, it was necessary for the administration to request people stay at home, but there was the possibility that this process could lead to an unconscious belief that the executive branch stands above the judicial and legislative branches of government, leading directly to greater surveillance and regulation of the populace by the state.

Sato lamented that although the world would change significantly after COVID-19, with existing international cooperation systems no longer being able to be maintained, there was no one who could say what king of world it would become. Even once this threat has passed, there is always the possibility of a new unknown diseases arising, and he suggested that states will use AI technology to increase their surveillance of the populace. He also gave his insight that people’s interests will turn towards more internal pursuits, such as what true happiness is, human mortality, and the meaning of life, leading to greater interest in philosophy and religion.