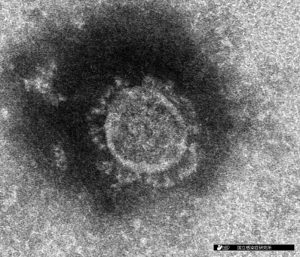 On March 11, the World Health Organization (WHO) declared the global outbreak of the novel coronavirus COVID-19 to be a pandemic. The April issues of major Japanese monthly magazines focused their coverage on COVID-19, looking at its unique characteristics and warning that depending on how the situation develops, it could lead to the worst case scenario of the healthcare system collapsing. There were also arguments made that this was the type of global problem which Japan and China could cooperate closely on.

The FPCJ’s President Kiyotaka Akasaka was also interviewed in the April issue of Chuokoron in an article titled, “Why so pro-China? The truth of the WHO,” in which he praised the WHO’s response to the coronavirus, while also criticizing WHO Director-General Tedros for his excessively pro-China comments.

*Photo: provided by The National Institute of Infectious Diseases (NIID)

Yamamoto noted that while humanity has experienced multiple pandemics over the course of history, such as the Black Death in Europe during the 14th century, the New World epidemics in the 16th century, and the Spanish flu in 1918­–1919, at one point Hansen’s disease, tuberculosis, syphilis, and AIDS were also on the road to becoming pandemics. He commented that COVID-19 became a pandemic relatively quickly compared to other infectious diseases, and that even with the same pathogen, the speed and scale of the spread of infections was affected by the social structure at the time.

He explained that Hansen’s disease was spread by the Migration Period and the Crusades in medieval Europe, tuberculosis by pollution from the Industrial Revolution in the 18th century, the Spanish flu by World War I, and AIDS by colonialism and the introduction of modern medicine, while for COVID-19, “The world has become many degrees closer with the amount of people traveling. Humans continually encroach on the ecosystems of wild animals. The habitats of wild animals have shrunk due to climate change. These factors have led to the spread of new infectious diseases.”

Although it is not possible to accurately predict what path the spread of COVID-19 will take at this point, Yamamoto stated, “The new societies that sometimes form after pandemics do not appear as independent events, but are instead formed by an acceleration of the changes occurring through the passage of history,” and noted, “This could be the trigger for the appearance of a new world, different to the one we know.”

Okabe noted that according to Chinese data, the mortality rate of COVID-19 was approximately 2%, and that although it is highly infectious not everyone displays severe symptoms, with many people suffering surprisingly few symptoms. In Japan’s case, the mortality rate can likely be kept at 1% or below if the current level of healthcare can be maintained, with the majority of people recovering. Therefore, it is important to determine the severity of the illness and carry out proper treatment before the situation becomes critical.

Okabe warned that pneumonia can be caused by many other factors aside from COVID-19, such as Streptococcus pneumoniae or aspiration, and that people should be aware that it is a dangerous disease which is the fifth leading cause of death in Japan. Not everyone infected by COVID-19 gets pneumonia, with the majority recovering after only minor symptoms, and he stressed that if people in the beginning stages of the infection all rush to hospitals, the response to people at high risk and those with severe symptoms will suffer and could lead to a collapse of the healthcare system, which must be avoided.

Commenting on the spread of the infection on the cruise ship, Okabe approved of not letting the passengers or crew debark from the ship and enter Japan in the initial stages, as that could have helped prevent the spread within Japan, but also commented that even on a luxury cruise ship it was still not a very good plan to keep people enclosed in cramped conditions over a long period of time, noting, “If you are going to isolate people, it would be better to do so in a place where it was easier to provide medical care,” and, “Criticisms can be made at any time, but it will be necessary to take time in the future to examine what response should have been taken.”

Considering the current environment and cultural background, humanity will not be able to avoid new emerging infectious diseases, and the progress of urbanization and populations becoming more concentrated while the movements of people and goods also become quicker and more frequent is a major risk for the spread of infections, so Okabe emphasized that preparations should be made to deal with emerging infectious diseases when they occur, including making sure the necessary budget and personnel are available.

■ Bungeishunju, “The worst scenario of a healthcare collapse (even with a mortality rate of 2%)”

Okada comments, “The scary part of this virus is that although it seems like only a ‘minor illness’ at first glance, if large numbers of people are infected by it at the same time it can bring about chaos in society, and in particular maybe even lead to a collapse of the healthcare system.” She gave the following reasons for why this virus was particularly nasty: 1) It has a long incubation period from infection to before symptoms show, and is infectious during this stage, with many people infected with it showing no or only minor symptoms, 2) It is assumed that the virus can remain viable for extended periods of time outside the body, and 3) There are no antiviral drugs or vaccines for it.

As an example of how the response of regional governments can make a drastic difference in the spread of infections, Okada introduced the case of how the mayor of St. Louis, Missouri in the US quickly declared an emergency during the 1918–1919 Spanish flu pandemic, reducing the number of deaths in the city. She noted that the lessons to learn from this example were the rapid and flexible decision-making by local and national governments, and the importance of introducing restrictions on gatherings and movement early on.

She concluded that eliminating the spread was likely impossible, and so the only remaining choice was to lower the peak of the spread. In order to do so, widespread cooperation between the national government, government agencies, prefectural governments, local governments, and businesses was necessary as an issue of national crisis management.

Tanaka commented that the liberal international order created after World War II with the US at its center was faltering, and that although the US and China were avoiding a direct war they were still competing militarily, economically, and culturally, and so the current situation was essentially “a New Cold War.” He also suggested that China now would be a tougher opponent than the Soviet Union was during the Cold War.

Tanaka stated that Japan finding areas where it can cooperate with China would be very meaningful in helping to ensure peaceful coexistence during this New Cold War, and suggested that global issues such as climate change and infectious diseases including COVID-19 were areas in which Japan and China could engage in significant cooperation. He commented that although US President Trump is uninterested in multilateral negotiations and unlikely to take an active role, Japan should still cooperate with China in areas for which cooperation was possible, and suggested that in the long term, the US would also follow this path.