Prior to the diplomatic conference for the Minamata Convention on Mercury which will be held in Kumamoto prefecture this October, FPCJ conducted a press tour in cooperation with the prefecture. The tour focused on local government, residences, and corporations which, from the lessons learned from Minamata disease, have been making ceaseless efforts to reconstruct Minamata as an eco-friendly city. This tour had fifteen journalists from China, Hong Kong, Vietnam, Bangladesh, Italy, Germany, Switzerland and the US.(Click here for more details on the tour) 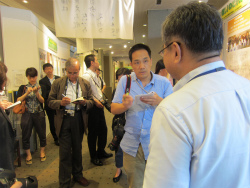 The tour first visited the The Minamata Disease Municipal Museum. After watching a video which gives an outline of Minamata disease, the journalist had an explanation about the Japanese social background at the time when the disease came out, and also the current compensation situation for patients. Questions such as the number of people who died as a direct result of Minamata disease and the cost of construction and safety of Minamata Eco Park, land reclaimed after mercury-polluted Minamata Bay was dredged, were raided by the journalists.

The tour participants then moved to the Soshisha which was established by Minamata disease patients, their families, and their supporters. The journalists received a briefing on valuable documents that tell the history of the patients’ conflicts with the government and Chisso Corporation. They also had an explanation about “Moya Naoshi” (“repairing social bonds,” a phrase coined from moyou, originally meaning to tie boats together) to reunite in revitalizing the local community. The journalists then interviewed with Ms. Rimiko Yoshinaga, a victim of Minamata disease, to talk about the experiences of her family members who had died because of the disease. 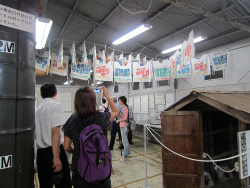 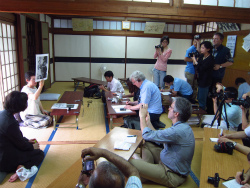 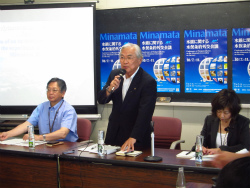 In the interview with Mr. Katsuaki Miyamoto, Mayor of Minamata City, the tour participants had a briefing on its ceaseless efforts to build an environmentally friendly city which let Minamata to be designated by the national government as an Environment Model City. The Mayor also emphasized the importance of telling future generations the experiences of Minamata through accepting JICA training course and seminars of Universities. The tour then moved to one of the 300 garbage collection centers in the city to see how garbage is sorted by the Minamata method. The journalists interviewed local volunteer staffs including junior high school students who help separate the garbage of the city.

On the second day of the tour, participants visited two Eco-Meisters, Mr. Hajime Sugimoto of Sugimoto Suisan, Ltd. and Mr. Kazuya Matsumoto of the Sakurano-en Tea Plantation. (Minamata City has established a system that designates local producers engaged in making things that are environmentally friendly or beneficial to health as “Eco Meisters.”) Mr. Sugimoto, who produces additive-free iriko and chirimen dried fish, talked about the safe and reliable Minamata bland, which took more than 40 years to be achieved overcoming discrimination and prejudice against Minamata disease. He also mentioned that they still conduct periodic mercury inspection on fish and shellfish in Minamata Bay. Participants then moved to the Sakurano-en, tea plantation operated by Mr. Kazuya Matsumoto who cultivates tea without using agricultural chemicals. Tea from Sakurano-en is exported to Germany, France, and the United Kingdom. 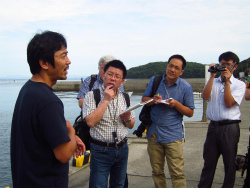 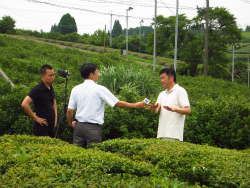 In the visit to JNC (Japan New Chisso), journalists raised in-depth questions about the compensation system and its total costs for Minamata disease victims. The journalists also visited Minamata factory by bus and received a description of the facilities including the reactor bio-system that handles waste water in the plant.

Prior to the diplomatic conference for the Minamata Convention on Mercury, Governor Kabashima said that he would like to show the world Minamata city’s ecofriendly efforts. He also gave a message to developing countries where economic policy tends to be given priority over environmental issues, saying “Once we destroy the natural environment, recovering it costs a large sum of money and time. I hope that these countries and regions learn a serious lesson from Minamata’s experiences and adopt an ecofriendly policy. 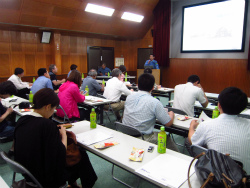 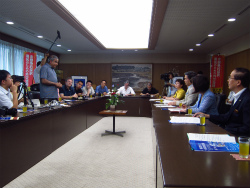 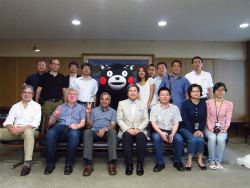