Ahead of the G20 Osaka Summit, the FPCJ held a press tour to the Kansai region, a pillar of Japan’s economy, to promote its attractions to the world. This was the final tour in a series of three, and involved visiting companies with cutting-edge technology in areas such as the life sciences in Osaka and Nara. The tour covered efforts in Osaka and the Kansai region to contribute to the theme of the 2025 Osaka-Kansai Expo, “Designing Future Society for Our Lives.” A total of eight journalists participated in the tour, from China, Hong Kong, Hungary, South Korea, and Vietnam.

*This press tour was sponsored by the Kansai Promotion Council for the 2019 G20 Osaka Summit, and planned and operated by Foreign Press Center Japan.

The tour visited Daihen Corporation to learn about its wireless charging system for electric vehicles (EV). After receiving an overall explanation, the journalists saw a demonstration of an ultra-compact self-driving car charging automatically with no cables simply by stopping at a specific spot. Some journalists were able to sit in the passenger seat to film and photograph the car driving and charging automatically from the inside. In response to the explanation that “If this wireless charging system is used in areas such as parking lots and roads, it will be possible to charge while parked or driving. It would be a society where there is no need to make an effort to charge,” a journalist commented in surprise, “This really is the technology of the future.” 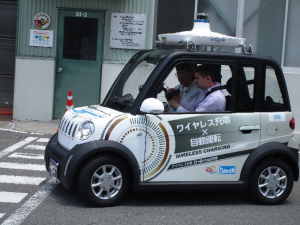 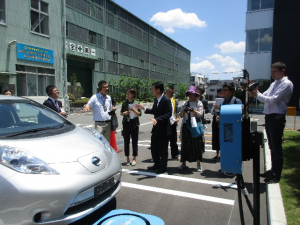 The tour visited furniture manufacturer I&C and learned about their “robotic furniture” using the latest technology, including IoT and AI. Company president Mr. Yukio Sada explained that just by being able to change the height of furniture, it became possible for people in wheelchairs or with other physical disabilities to easily use them, enabling people who required care until then to become independent and lead active lifestyles. He also explained that as the population ages throughout the world, the amount of home nursing care is also increasing, and the demand for robotic furniture is growing. The journalists showed interest as they filmed and photographed what appeared to be normal, stylish bathroom and kitchen sinks moving up and down at the flip of a switch, and asked questions about the AI and sensing technology used in them, and about the potential size of the market. 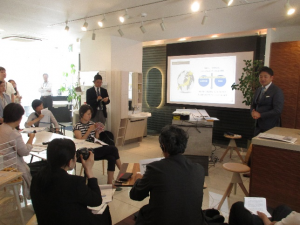 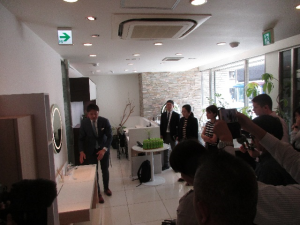 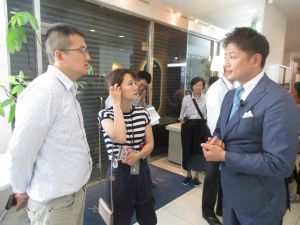 The tour visited Iwasaki Co., Ltd., the leading company in the food sample industry, to learn about how it is applying its techniques in the health and medical industry. First, the journalists saw a system in which different food models are combined to make a meal, with the nutritional content and calories of that meal then displayed on a screen. The journalists were amazed by how real the food models were, and tried making their own meals using this system. Next, the group learned about a silicone model of blood vessels used by doctors to train for catheter insertions. The company explained that by using their food sample manufacturing techniques, they were able to realistically replicate the resistance of passing a catheter through blood vessels. The tour then saw artisans individually making food models and blood vessel models by hand. The journalists asked questions about the difference between making the products by hand and using a 3D printer, and what led to the creation of Japan’s unique culture of food samples. 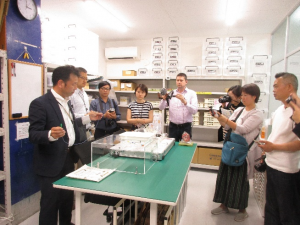 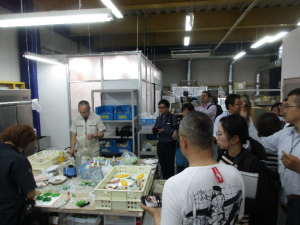 The tour visited the Sakishima Cosmo Tower, a landmark of the Osaka Bay Area, and heard about local preparations for the G20 Osaka Summit and an overview of the 2025 Osaka-Kansai Expo. The Kansai Promotion Council for the 2019 G20 Osaka Summit, the sponsors of this tour, explained, “This Summit will be the largest international conference ever held in Japan. It is also a summit to be held in a major city, with the daily lives and economic activities of residents continuing as normal while the summit is on. We would like to hold it with no issues, and use that experience to help make the 2025 Expo a success.” The journalists asked questions about traffic restrictions during the summit. After the Japan Association for the 2025 World Exposition explained the plans for the expo, the group went to the observation deck located 252 meters above ground. From there, the journalists filmed and photographed Intex Osaka, where the G20 Summit will be held, and the artificial island Yumeshima, where the Expo will be held. 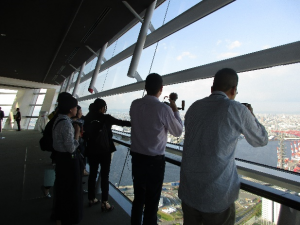 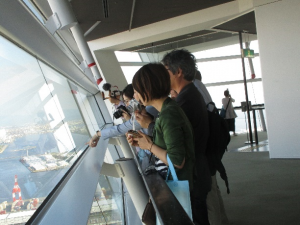 Atoun Inc. is working on developing “wearable robots” (Powered Wear) to decrease the physical burden on workers, in order to create a “power-barrierless society” where people can work regardless of differences in strength due to factors such as age.

President Hiromichi Fujimoto explained that the Atoun Model Y, Powered Wear that supports the lower back which the company released last year, has seen use in the fields of logistics and manufacturing, influenced by the labor shortage and aging population. The journalists were able to wear the Model Y, and see just how much the Powered Wear reduced the strain on their bodies when lifting heavy objects. There was also a demonstration of a larger powered suit currently under development. The journalists showed excitement as they filmed and photographed the dynamic movements of this robot that seemed straight from a sci-fi movie. 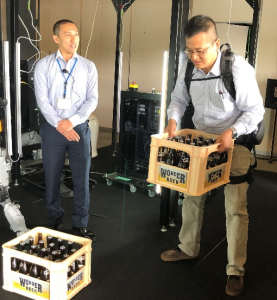 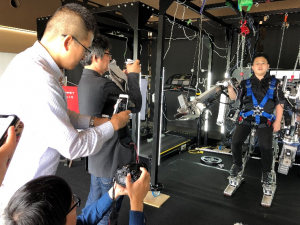 The tour visited Ryoho Freeze Systems Co., Ltd., which has developed freezing technology making it possible to freeze food without damaging freshness or taste, preserving the flavor of everything from raw meat and fish to sushi and cakes. The company explained that this technology made it possible to stock food products, contributing to a reduction in food waste loss, and there were hopes that it could also be applied to the field of regenerative medicine by freezing and preserving cells. The majority of the dishes served at the restaurant on the first floor of Ryoho Freeze Systems head office is prepared at a processing plant in Okinawa before freezing, so normally all the kitchen has to do is to defrost and plate the food. In addition to filming and photographing this futuristic “cooking” in the kitchen, the journalists were able to try food such as sushi, and commented that it seemed unbelievable that it had been frozen. 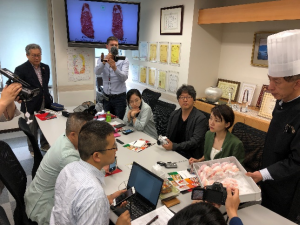 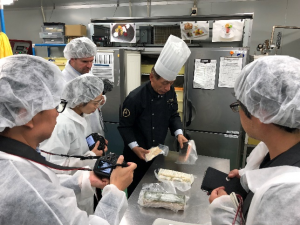 The tour visited the Hirakata factory of Taiyo Kogyo Corporation, a manufacturer of large tent-like structures such as the roof of the Tokyo Dome. The company explained the history of how Taiyo Kogyo grew into the world’s leading company in the industry after the 1970 Osaka Expo, and how the company’s technology is used in roof structures at exhibition sites and large sports facilities throughout the world. They also explained how membrane structures were growing more popular, due to being light, tough, and safe, and journalists asked questions about what materials are used and what Taiyo Kogyo’s share of the domestic and global markets was. The tour then visited a large, gymnasium-like area where membranes were being welded together, and saw a durability test of membrane materials at the company’s Technical Research Center. 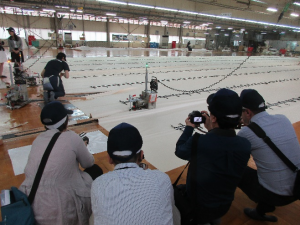 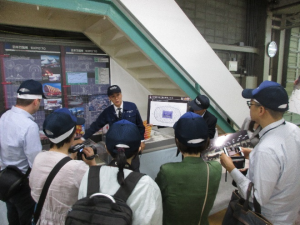 The tour met with the student organization Wakazo, which contributed to the bid for the 2025 Osaka-Kansai Expo. The four university students who met the journalists at Osaka University gave a presentation on what led to Wakazo being founded, their activities for a successful bid, and their plan to have a Wakazo Pavilion at the Expo. The journalists asked questions about why the students had decided to join Wakazo, their thoughts on the main theme of the Expo (Designing Future Society for Our Lives), and their plans for the group after the Expo. The youngest member, Naoki Shitanda (a first-year university student), received applause from the journalists for this comment: “I would like to make this into an Expo which people will look back on and say, ‘The actions of youths at that time changed the world.’ I would like to take this opportunity to change the way the world looks at young people.” 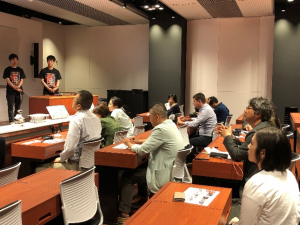 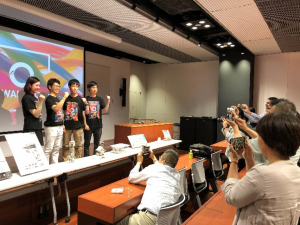