A press tour was held to Fukushima on February 21 and 22, 2018, just ahead of the seventh anniversary of the Great East Japan Earthquake.

Seven correspondents participated in the tour, from media outlets in Belgium, France, Germany, Switzerland, Taiwan, the UK, and Vietnam.

*This tour was sponsored by Fukushima Prefecture, with planning cooperation by the FPCJ.

Commutan Fukushima, the information and communication building of the Centre for Environmental Creation, teaches visitors fundamental knowledge about radiation and the current situation in Fukushima, through exhibits and video. After the introduction of exhibits with general information on radiation and decontamination, and comparing radiation levels from immediately after the earthquake to levels today, the tour was told about the state of recovery throughout Fukushima Prefecture as a whole.

The journalists asked questions such as how many days it took to decontaminate a single home, details on testing the radioactivity of agricultural products, and how testing methods changed over the seven years since the earthquake. 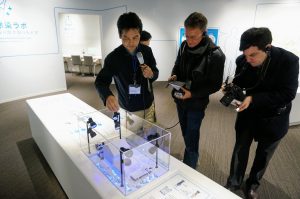 Gainax is an animation company known for creating popular anime including Neon Genesis Evangelion. In April 2015, Fukushima Gainax was established as a new studio in Miharu, Fukushima. Mr. Asao, a Fukushima native, showed the group around the museum and explained why they chose Fukushima for their new studio, followed by interviews with workers in their 20s and 30s.

The journalists asked the young workers about the reaction from friends and relatives in response to taking a job in Fukushima, and what changes had occurred in the area since they began working there. 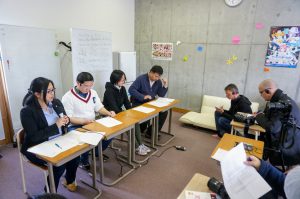 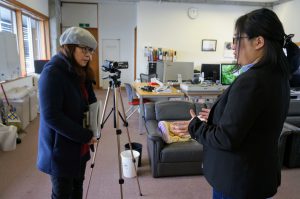 Niidahonke has made sake using 100% natural rice cultivated without using agricultural chemicals or synthetic fertilizers since before the earthquake. Currently, the brewery is cooperating in the process of growing rice for sake with Fukushima farmers, who are suffering due to baseless rumors, and brewing sake using Fukushima-grown rice. The tour heard about the passion for making sake by President and Head Brewer Yasuhiko Niida. He also guided the tour around his brewery, where journalists filmed and photographed equipment such as fermentation tanks, while explaining the process of making sake.

The journalists asked about concrete measures to clear up misinformation, and whether he considered giving up on the business after the earthquake. 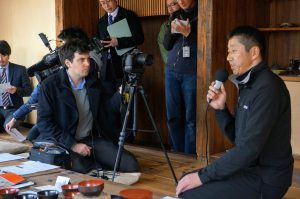 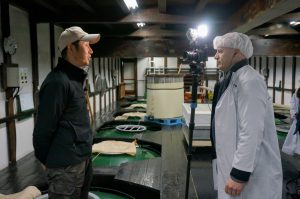 The tour visited Okuma town, where the entire population is still evacuated, and heard from municipal employees about the current state of the town and reconstruction plans. The tour was then guided around town by the Jijii Butai (Old Man Squad), composed of six former town hall employees, and heard about their daily patrols. The tour also visited the Okuma Hometown Reconstruction Mega Solar power station.

The journalists asked the Old Man Squad about their motivations for continuing to travel from where they have evacuated to Okuma to volunteer every day, and plans for land use after the Mega Solar power station stops operations. 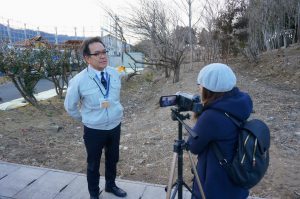 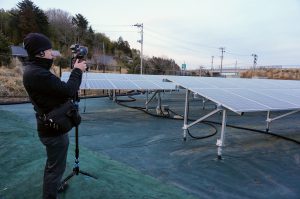 Wonder Farm is a “tomato theme park” that includes a plant factory where tomatoes are grown, a restaurant with dishes made from those tomatoes, and a store selling products made using those tomatoes. President Hiroshi Motoki spoke about what lead him to start Wonder Farm, and what businesses he deals with, followed by the tour visiting the tomato plant factory and the store.

The journalists asked whether he felt there were demerits to being a farmer in Fukushima Prefecture, his opinion on the TPP, and future business plans. 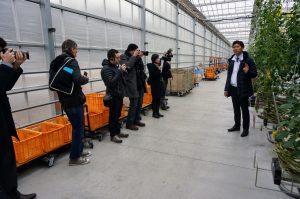 Namie is one of the most recent areas to have evacuation orders lifted (excluding some “difficult-to-return” zones). The tour drove into Namie north along National Route 6, which goes through difficult-to-return zones the coast on where barricades have been placed in front of homes and businesses.

A town employee guided the tour around Ohirayama Cemetery, located on high ground, and the port in Ukedo, a district along the coast which was damaged by the tsunami. The group then visited Machi Nami Marche, a temporary shopping mall which opened in October 2016, and spoke with Ms. Rieko Watanabe, the owner of Kitchen Grandma (which sells lunches and homemade cooking).

The journalists asked questions about how the number of residents in Ukedo has changed, the state of distribution for seafood caught there, and Ms. Watanabe’s motivation for travelling in from the temporary housing she is living in to operate Kitchen Grandma. 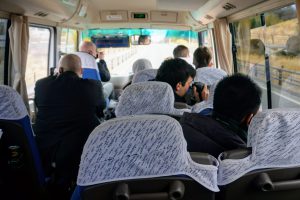 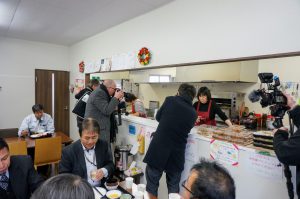 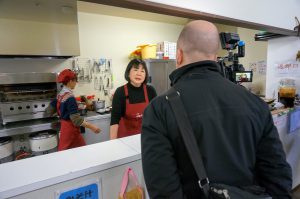 Kikuchi Seisakusho is a die machining company established over 40 years ago, whose president is from Iitate, Fukushima. The Fukushima factory is located in Iitate, which was temporarily designated as an evacuation area after the disaster, but since then has continued production. After hearing about what the situation was like at the time of the earthquake, the journalists filmed and photographed work being carried out in the factory, including with pedal-operated press machines that were some of the first used by the company. Employees spoke about how they felt regarding the factory continuing operations right after the earthquake, and their concerns about returning to Iitate from the places they had evacuated to. 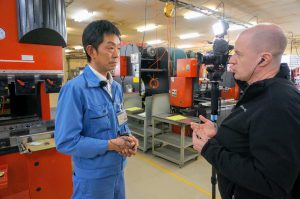