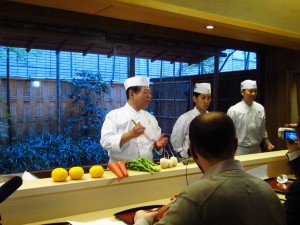 Spurred by “washoku” (Japanese Cuisine) being entered on UNESCO’s Intangible Cultural Heritage list (ICH), FPCJ conducted a press tour to discover why washoku was registered as ICH.  The tour had 18 journalists from Indonesia, Hong Kong, China, the United Kingdom, Spain, Italy, Brazil and the US. (Click here for more details of the tour.)

In this tour, participants covered Mr. Yoshihiro Murata, the third generation and the master chef of Kikunoi, which is a traditional “ryotei” (a particular type of high-class Japanese restaurant) based in Kyoto. He has been one of the leaders applying for the ICH registration. Mr. Murata has been working hard on “shokuiku” (food education) of washoku to elementary school students and promoting washoku to the world. Despite his tight schedule, he accepted our interview. He talked in an energetic tone about the deep world of washoku and its prospects in the future. 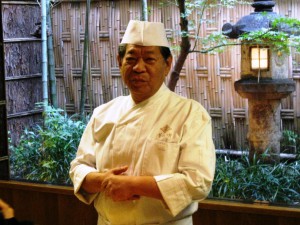 (1) Cooking demonstration/ Lunch
To begin with, participants did a shot of Mr. Murata slicing the raw fish for sashimi and placing it with other foods on each dish.
The scene, which featured several beautiful dishes being prepared right in front of the participants, was intense. Photo/ video camera crews were happy to capture some nice pictures. During this session, Mr. Murata explained the characteristics of washoku from three aspects.
The first aspect was that washoku is the only cuisine in the world which centers on “umami” (a pleasant savory taste.) Mr. Murata said that globally well-known chefs come to Kikunoi in Kyoto to learn how to control “umami.”
The second aspect concerned seasonal ingredients. Mr. Murata lined colorful vegetables in front of us. Turnip, yuzu (a kind of citrus much used in Japanese cuisine), edible chrysanthemum and carrots especially grown in Kyoto. Participants tried some of these vegetables plain and felt the taste of well selected ingredients. Mr. Murata’s explanation does not depend solely on his sense as a chef but is on a scientific basis. He told the participants that memories of meals are not about their taste but their aroma. Therefore it is meaningful to use ingredients with a rich aroma.
The third aspect was Japanese kitchen knives. He explained that there is a big difference between Western and Japanese kitchen knives. The former are used to divide the ingredient into pieces by pushing the knife forward. The latter are to cut the cell of the ingredients by pulling the knife. Mr. Murata demonstrated this difference with humor. 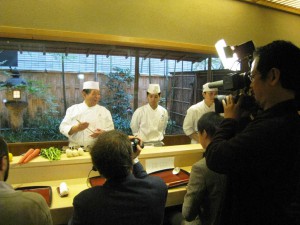 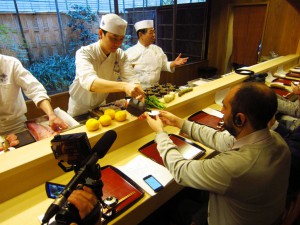 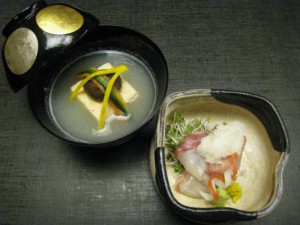 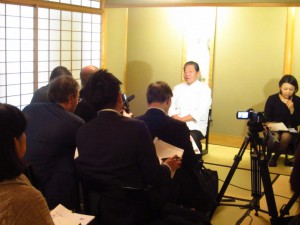 (2) Interview with Mr. Murata
Participants experienced the seasonal ingredients’ tastiness and the “umami” of dashi (a broth extracted from Kombu (kelp, a kind of seaweed) or Katsuobushi (dried bonito)) using their five sense through eating lunch. Then everyone moved upstairs and the interview with Mr. Murata was held in a tatami (a traditional Japanese flooring mat made of woven soft rush) room.
Mr. Murata is one of the people who made a high contribution for the ICH registration. So the interview was opened by the question, why did he want washoku to be registered on the list?

It was because he realized two things.

One was from his experience with Japanese children who only know westernized dietary habits. He realized that washoku would die out if no steps were taken.
The other was washoku’s usefulness to culinary culture and improving the health of human beings in the future. This is because washoku enables people to have many ingredients in one meal but keeps the total calories low thanks to dashi.

What is outstanding is that Mr. Murata considers the designation as a big turning point for washoku. He says the Japanese government has to create new initiatives to protect washoku as a part of Japanese culture. As an example of new initiatives, Mr. Murata, who is also a director of the NPO Japanese Culinary Academy, introduced its projects. 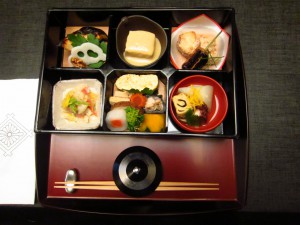 em is the establishment of “Faculties of Japanese cuisine”, specializing in washoku, in universities or in other higher education institutions. The project is already ongoing at Kyoto Prefectural University and Ritsumeikan University. The establishment of this kind of new research institution will be the base for raising researchers who study washoku academically. This will enable more people to understand washoku which has hitherto been understood solely by the chefs. Moreover, the new faculty will open the door of washoku widely to the public. In the past and even today, involvement in washoku was limited to the children of the ryotei or similar people.

The other example is the new program that allows motivated foreign chefs to study washoku in Kyoto City, which has been designated as a comprehensive special zone by the central government. This new program was activated at the end of November this year by the central government as the “International Promotion Program of Kyoto’s Traditional Cuisine.” The program allows foreign chefs who meet the requirements to learn washoku to be employed at designated ryotei in Kyoto City for two years at the longest. In January 2014, chefs from France and Italy will come as the first ones. Mr. Murata has been confronting the difficulties of the law system for a while when accepting foreign chefs. “Japan has to accept foreign chefs just as restaurants in Europe accept Japanese chefs.” Therefore he has been encouraging the activation of the program. Trained foreign chefs will return to their own countries, taking with them the theory and practice of washoku. This can be expected not only to accelerate the world-wide promotion of washoku but also the promotion of its cooking methods and its adaption to the local cuisine. A breath of fresh air will be provided to washoku