The ama press tour in Toba City and Shima City in Mie Prefecture was held hosted by the Council for Ama Promotion, with FPCJ’s cooperation in planning and operation. This tour had 11 journalists from China, Taiwan, Korea, Vietnam, France, Germany, and Italy. (Click here for more details on the tour)

The tour first visited the Toba Sea-Folk Museum. Mr. Yoshitaka Ishihara, President of the Council for Ama Promotion, gave an explanation about the ama women divers and their culture which has been changing with the times. He also introduced the ama fisheries which are sustainable as they prevent resource depletion of the sea. Questions such as the aim to register the ama fisheries as UNESCO’s Intangible Cultural Heritage, the differences between Japanese and Korean ama, and the successor problem of the aging diver population were raised by the journalists. In a tour inside the museum, the tour participants showed their strong interest in some exhibits such as the ama’s traditional white costume (the divers now use wet suits for fishing), and strict rules about the size of abalones which they are allowed to catch, in order to preserve the life cycle of the sea. 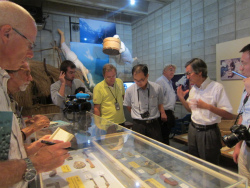 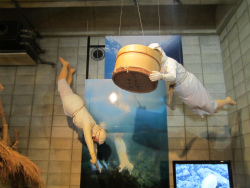 The tour participants then interviewed the Nakagawa three-generation ama family which runs a guesthouse in Toba City. Grandmother Sumiko, her daughter-in-law Sanae, and granddaughter Shizuka talked about how they became ama divers, and the pleasures and difficulties they have during the fisheries. Questions such as the quantity of abalones they catch in a day, the influence of “Ama-chan”, the serialized television series broadcast by NHK, and the cultural interchange with ama divers in Jeju Island in Korea were raised by the journalists.

The tour then visited “Ishigami-San” a small shrine where worshipped ama divers have worshiped since olden days. In recent years, the shrine became popular nationwide from the belief that it grants one wish for women. More than 180 thousand people visited the shrine last year. The tour participants filmed the visitors making a wish to the Ishigami-san. At the Gozaya, a souvenir shop/café run by the Toba Chamber of Commerce and Industry, the participants covered the city’s approaches toward the revitalization of the town by selling original ama goods and regional products for visitors. 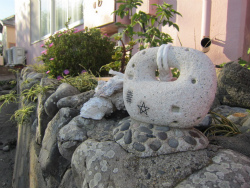 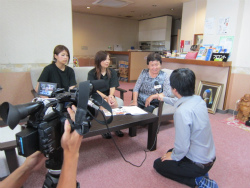 On the second day, the tour participants observed ama fishing from another fishing boat. All the journalists were on the edges of their seats to get pictures of the ama women who were diving 6 to 10 meters down in the sea without any air bottles. Among them all, the French and Vietnamese video media were especially passionate to film the dynamic scene of the fishing, and the French journalist even dived together with the ama and filmed in the sea. Even more, the tour participants had a precious opportunity to see “Meoto Ama” (ancient style of ama fishing done by a married couple) which is rarely seen these days. After that, the journalists interviewed ama divers in the Amagoya, the hut where ama divers get together after a fishing session. 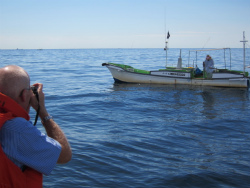 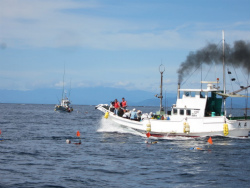 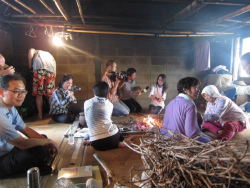 The tour then visited “Amagoya Experience” which is popular among tourists these days. There, three veteran ama who have retired from active duty served fresh-caught food to the journalists and talked expressively about the statute of women used to be in the fishing village-society of many years ago, and the special meaning for them to dive the sea and fish. A journalist from Taiwan made a comment saying “Even though the environment surrounding ama women divers changes with the times, their passion for the sea and their smiles will never change. I would like to write an article focusing on the strength on ama” 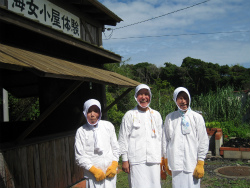 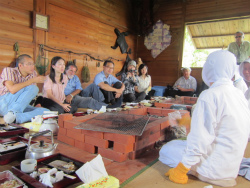