Japan has strong women who have lived with the sea for 5,000 years 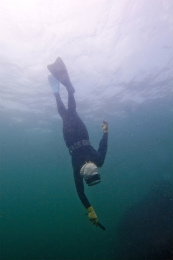 Ama woman divers live by collecting abalone, turban shell, and other sea products by means of skin diving. It is said that ama divers have a history of 5,000 years.They now exist only in Japan and Korea (Jeju Island). Since 2007 Japan and the Republic of Korea have been cooperating to register the ama fisheries as UNESCO's Intangible Cultural Heritage, because it is a valuable culture of East Asia's peoples of the sea. 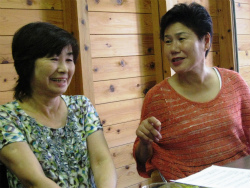 Toba City and Shima City on the Shima Peninsula, Mie Prefecture, have the largest number of ama divers in Japan.The number of ama, however, has been decreasing as a result of the modernization of fisheries, the decrease of marine resources and other reasons. In 1956 there were 17,611 ama in Japan but the number has dropped sharply; in 2010, little more than a half century later, only 2,174, or about one eighth, were left. About half of them, 973, are diving in Toba City or Shima City; their ageing and a lack of successors are posing a problem. 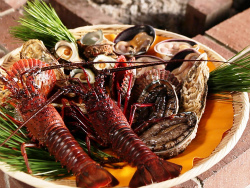 Ama fishing has much to do with the Grand Shrines of Ise (*Note 1), which are rebuilt every 20 years, and this year is the 20th. Legend has it that when Yamatohime-no-mikoto, who enshrined Amaterasu Omikami, the sun goddess, at Ise Grand Shrine, visited Kuzaki in Toba City, she was fascinated by the taste of the abalone offered by Oben, an ama, and since then abalone has been dedicated at the Ise Grand Shrines. Even today, every year, 4,000 - 5,000 abalones taken by ama in this area are dedicated at Ise Grand Shrines as food for the deities.

Why are the divers women? There are several explanations: for example, women's bodies have more fat than men's and can endure the cold longer than men. Ama fishing is a women’s self-supporting occupation from ancient times and a group of ama working together has been the hub of their local community.

In recent years, local communities have been using ama fishing to solve underpopulation or to attract tourists. A tiny guardian shrine of ama is attracting women from all over Japan. The "Amagoya (ama hut) Experience" is another attraction, in which you can enjoy freshly-caught sea food served by ama and you can directly talk to ama about their diving and daily lives.

Note 1: About the Grand Shrines of Ise 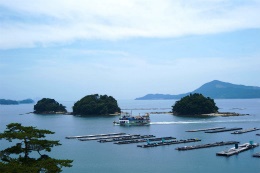 *The tour is hosted by Council for Ama Promotion with FPCJ's cooperation in planning and operation. 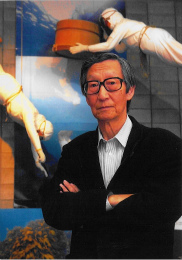 (English) http://www.umihaku.com/past_event/english/index_english.html
(Chinese) http://www.umihaku.com/china.pdf
In 2007 Japan and Korea initiated joint efforts to register the ama fishing as UNESCO's Intangible Cultural Heritage, regarding ama divers and their culture as a valuable resource of East Asia. In 2012, ama in the Toba-Shima region, the local governments (Mie Prefecture, Toba City and Shima City), local fishery cooperatives, tourism and commerce and industry organizations, established a Council for Ama Promotion. Local ama of Japan and Korea took part in EXPO 2012 Yeosu Korea and an "Ama Festival" that was held in Jeju Island in Korea, thus deepening exchange between ama of the two countries. Mr. Yoshitaka Ishihara, President of the Toba Sea-Folk Museum, is Chairman of the Council. He is a specialist in the real life of ama as he has associated with them for a long time. Ama live with the sea, a part of nature that has a fathomless power, and dive, always living within a hair's breadth. Ama have observed and handed down amulets and charms that pray for security and good catches; and they also have festivals to thank the deities for the blessings of nature. Ama fishing is an occupation of self-supporting women. Mr. Ishihara can show us attractions of the ama culture from many aspects.
＊At the outset of this tour, Mr. Ishihara tells us the significance of keeping "ama" as our cultural asset. Then the tour visits the Museum to deepen your understanding of the ama culture. 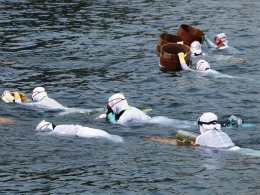 Ama dive without any air bottle. Their way of fishing is primitive and far from modern fisheries that depends on power machinery and information and telecommunications technology. They have unique diving techniques to catch as many shellfishes as possible in a very short time, less than 50 seconds while holding their breath under water, so it is called a “match of 50.” Because their work is very challenging, however, it is said that each ama loses 10 kg during the fishing season. Each ama fishing area limits its own period, frequency and duration per day of fishing to prevent resource depletion and to preserve the life cycle of the sea. You can see the ama’s way as a sustainable model of fishing.
Among ama divers, the wisdom of not exhausting nature has been kept for at least 300 years. Today, Mie prefecture prohibits ama fishing from September 15 to December 31. It also prohibits catching abalone whose shell size is under 10.6 cm.
＊The press tour will get on a fishing boat and see ama fishing close up. We will cover the group of Ms. Mayumi Mitsuhashi (age 64), chairperson of the Ama Preservation Association. We can also interview ama divers after their fishing. 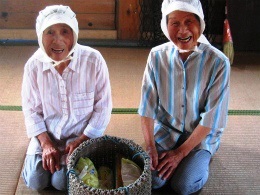 “Amagoya” (ama hut) is the a place for ama to warm and rest their cold bodies after the strain of diving in the sea, and also to get together. This has developed the climate that women play a central role in the local community. Ama fishing is a women’s self-supporting occupation since ancient times and they are the hub of their fishing villages. Recently there has been touristic ama hut. Visitors can enjoy freshly-caught sea food served by ama and talk to ama about their diving and tradition. Ama divers there who did strenuous ama fishing for more than 50 years are full of energy and laughter. This experience has become popular. “I somehow feel so cheered up by just listening to their stories,” a visitor commented.
＊We will visit the ama hut and interview veteran ama divers in their eighties. For lunch, we will also enjoy fresh sea food taken by ama divers.

4. The Nakagawas, three-generation ama family
- Active for promotion of local area and tourism -
(English) http://tobakanko.jp/en/index.html
(Chinese) http://tobakanko.jp/cn/index.html
In 2012, Toba City appointed the three-generation ama divers of the Nakagawa family as tourism promotion “girls.” Sumiko Nakagawa, 74, who has been engaged in ama diving for more than 55 years; her daughter-in-law Sanae, 41, who has 17 years of experience in ama diving; and her granddaughter Shizuka, a 22-year-old university student who began ama diving about four years ago, have been playing a very active role as “poster girls” appearing in promotional ads and PR events. The youngest, Shizuka, also appears in a tourism promotional poster that imitates the Dutch painter Vermeer’s masterpiece, “Girl with a Pearl Earring,” as Toba City is well known as a producer of pearls.

The Nakagawa family runs a guesthouse. Originally, only grandmother Sumiko was doing ama diving to serve visitors with seafood she caught as the main attraction of the guesthouse. Her daughter-in-law Sanae and granddaughter Shizuka began ama diving, inspired by their guests who are eager to directly ask grandmother Sumiko about her ama fishing. “Even now, the 74-year-old grandmother catches the largest amount of shellfish among the three of us. Even in a rough sea, she can dive down deep. She is always a big winner. We are no match for her,” Sanae laughs. “It is a pleasure to see our guests tasting and enjoying seafood I caught on my own,” says Sanae. “It is sad to see the number of people I can dive with decreasing in the neighborhood. I hope that the ama culture will be preserved,” she says.
＊The tour will interview the three-generation ama divers of the Nakagawa family. They will talk about their feelings for ama diving from each generation’s viewpoint and also about the Ama Summit, in which ama divers across Japan gathered in Toba City. 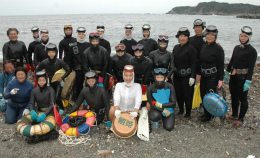 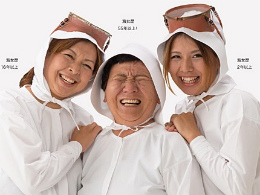 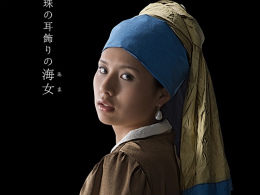 5. “Ishigami-san” Shrine
Osatsu Town Neighborhood Association / Toba Chamber of Commerce and industry
- Ama guardian shrine as a popular spiritual place among female tourists revitalizes town -
http://www.toba-osatsu.jp/kanko.htm#gozaya
Osatsu, a town with a dwindling population of about 1,400, has 100 ama. There is a small shrine called “Ishigami-san” which has been worshipped by ama divers. In recent years, annually 160,000 tourists, mainly female from all over the country, visit “Ishigami-san,” believing that the shrine grants one wish for a woman. The lucky charms with the motifs which ama divers wear to protect themselves against evil things in the sea are very popular. A woman athlete (marathon runner), Mizuki Noguchi, wore this charm and won the gold medal in the Athens Olympic Games, which has made Ishigami-san a famous spiritual power spot. Today the town is more bustling with more shops in the shrine’s approach. Toba Chamber of Commerce and Industry runs a souvenir shop/café “Gozaya, a house of ama” which sells original products such as seaweed collected by ama and special soy sauce mixed with locally produced oyster essence. “Ama” is the key factor for the revitalization of this town.
＊This press tour will walk around the ama guardian shrine “Ishigami-san” guided by Yukiteru Nakamura, chairman of the Osatsu Town Neighborhood Association. We will also visit the a souvenir shop/café which has a main role in the area’s action for re-energization of the area. 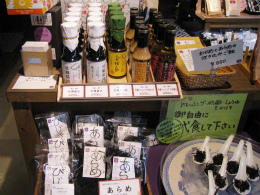 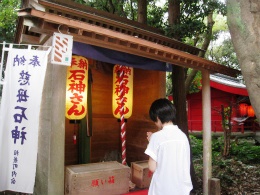 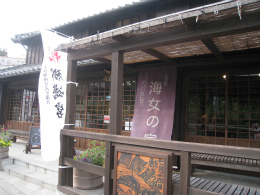 Day 2 in Shima City
8:30         Cover ama fisheries
Ms. Mayumi Mitsuhashi, Chairperson of the Ama Preservation Association.
(We will get on a fishing boat by courtesy of a local fisherman family, Itos.)
13:00-14:30    “Amagoya”(ama hut) Experience and Interview with Veteran Ama, Ms. Yuriko Matsui and Ms. Misae Yamamura
19:00 (tentative)  Arrive in Tokyo

3. Cost: 13,000 yen per person including transportation, meals and accommodation.
* FPCJ will later inform the participants of methods for payment, cancellation fee etc.

6. Remarks:
(1) There may be some restrictions on photographing and filming at the tour sites. Please follow the instructions of the officials on duty.
(2) The host and FPCJ will not be liable for any inconvenience, trouble or accident that might occur in the course of the tour.