Recently, Oita Prefecture has been aiming to become the number one industrial center in western Japan, promoting the use of revolutionary technologies such as the Internet of Things and drones, and increasing efforts in training to support the information industry. Oita has also been chosen as one of the 12 venues across Japan for the 2019 Rugby World Cup, the first Rugby World Cup to be held in Asia. The matchups were decided on November 2, and New Zealand, Australia, Wales, Fiji, and Americas 2 (Uruguay) are confirmed to be playing in Oita.

This press tour was sponsored by Oita Prefecture, and planned and operated by the FPCJ.  A total of 6 journalists participated, from China, France, Hong Kong, and South Korea.

※ Click here for further details on the tour 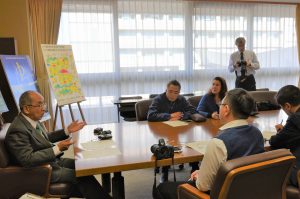 The governor spoke about Oita’s attractions including beautiful nature, plentiful food from the mountains and ocean, traditional culture, and the second-largest mining and manufacturing industry in Kyushu. He also discussed topics including successfully inviting the 2019 Rugby World Cup, efforts to attract youth and foreign tourists to events to be held in Oita in 2018 such as the National Cultural Festival and the International Onsen Summit, and the features of Oita’s onsen (hot springs).

Journalists asked questions including what the goal of attracting the Rugby World Cup was, whether there were any difficulties with the prefecture’s budget in consecutively hosting major events such as the National Cultural Festival and Rugby World Cup, and what efforts were being made to have young people work with traditional crafts such as pottery and bamboo crafting. 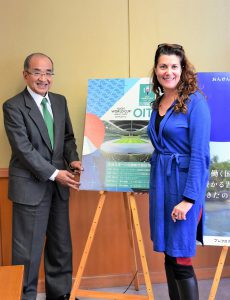 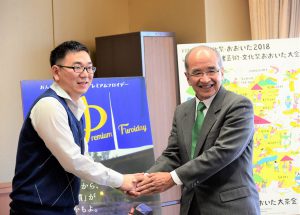 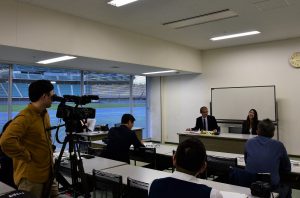 The tour visited 676 days before the beginning of the 2019 Rugby World Cup. Mr. Toshinori Nakatsuru, Director, Oita Prefecture Rugby World Cup 2019 Promotion Office, spoke to the journalists about preparations for the tournament, as well as events and promotional plans to make it a success. The APU Rugby Club’s manager, Ms. Reina Takahashi, spoke about initiatives for women’s rugby in Oita Prefecture. The tour then went to the stadium itself, seeing the locker rooms and VIP seating, and viewing the field from the stands and the track around it.

During the Q&A session, a journalist asked whether there was any resistance to the trying to bring the Rugby World Cup to Oita. Mr. Nakatsuru replied that the success of the 2002 soccer World Cup created a foundation of positivity towards the Rugby World Cup. 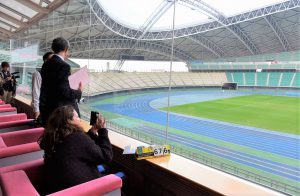 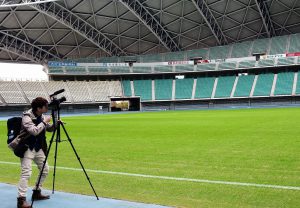 Mr. Seiji Yoshioka, director of the Oita Industry and Science Technology Center, spoke about the Oita prefectural government’s policies aiming to create new businesses through a fourth industrial revolution unique to Oita, “Oita 4.0,” what led to these policies, and cooperation with national government agencies. West Kronos is a major Japanese drone developer, which was established in Oita partly thanks to Oita 4.0. Mr. Hiroyuki Mizobe, the company’s president, spoke about what led to founding the company, interactions with the government, initiatives for expanding the business, and overseas collaboration.

The tour then went out to the test field, where Mr. Mizobe demonstrated the company’s new Poweregg drone. The journalists spent time taking ample footage of the drone flying, as it made for good video. During the Q&A, questions for Mr. Yoshioka and Mr. Mizobe included the market size for drone businesses, the level of Japanese drone technology, their opinion of Chinese drone technology and the Chinese drone industry, and what businesses could make use of drones. 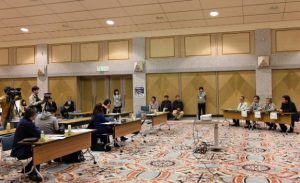 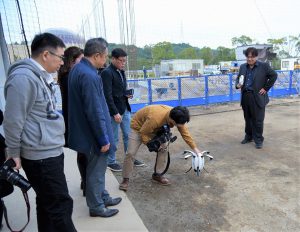 Dr. Takashi Kanda, director of the Usuki City Institute for Cultural Properties, explained how Oita Prefecture has the most stone Buddhas carved into cliff faces of any prefecture in Japan, and although no concrete evidence of exactly when they were carved has been found, they were designated as National Treasures after having resisted erosion for over 1000 years. He also mentioned how Usuki’s culture, history, and philosophy had coexisted alongside Christianity, and the journalists actively asked about the historical background, and the reason for carving the stone Buddhas.

Ms. Shinobu Yamaji, director of the Institute for Conservation and Use of Cultural Heritage, explained how since the stone is soft, with high water content, moss and ferns grow easily and could damage the stone Buddhas if nothing was done. Periodic cleaning is performed using ultraviolet light that eliminates the plants without damaging the stone. The journalists were interested at this unique technology having been developed due to the Usuki stone Buddhas. 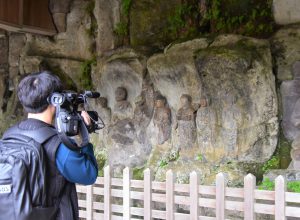 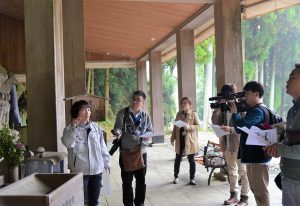 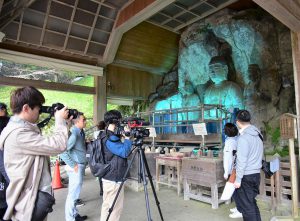 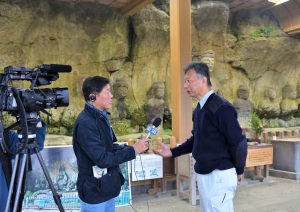 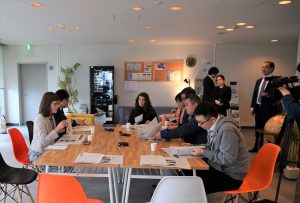 With Oita Prefecture having one of the highest ratios in Japan of international students compared to population, the Oita International Students Business Center was established to encourage those students to stay after graduation and help contribute to Oita’s economy.

Mr. Tetsuya Manai of the Oita Prefecture International Policy Section explained the background behind the establishment of the Oita International Students Business Center on one of the floors in a Ritsumeikan Asia Pacific University (APU) student dormitory, and the goals of the center.

The journalists spoke about starting businesses and future plans with Mr. Tenam Song, an APU student from South Korea who successfully started a business and released mushroom soup as a product, and with a group of students from China who were looking into importing and selling cashmere scarfs made in China. The Korean and Chinese journalists participating in the tour held individual interviews with the students from their respective countries. 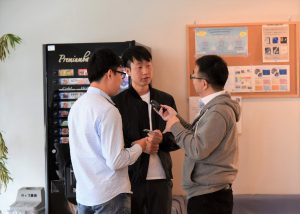 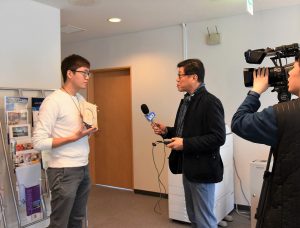 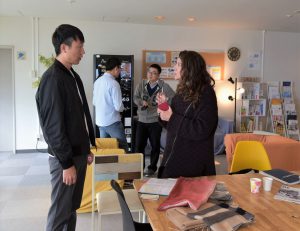 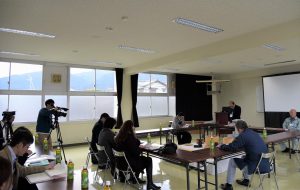 Moving to a classroom, the journalists saw first-year students processing bamboo stalks into the materials necessary for crafting, and weaving bamboo craft pieces, as well as second-year students creating their own original pieces. The journalists spoke with students who had other jobs previously, such as a 39-year-old former pharmacist, why they decided to train at the school, as well as asking about life in Beppu, the pieces they were making, and their plans for after graduation. The tour group showed great interest in the process of bamboo crafting, with a single artisan doing everything from start to finish including processing the materials themselves, and the contrast with modern industry’s focus on efficiency and division of labor. 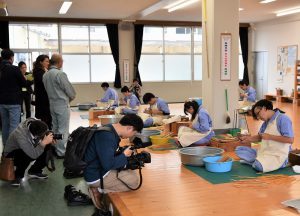 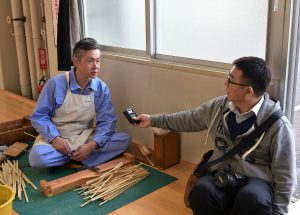 Mr. Otani, a Saitama native, worked as a landscape gardener until 2003, when making bamboo fences inspired him to want to make more delicate objects and he began learning bamboo craft at what is now the Oita Prefecture Bamboo Craft Training Center. The journalists were intrigued by his background, and how he decided to stay in Beppu and make bamboo craft after graduating. They asked him about life in Beppu, teaching younger artisans while perfecting techniques, and sales routes in Tokyo and overseas. Mr. Otani then demonstrated processing bamboo for materials, surprising the journalists when he explained this process takes three years to master. The journalists seemed impressed by the beautiful and delicate handiwork involved in the baskets and other pieces shown in the studio. Questions included what characteristics Oita bamboo has, whether Mr. Otani had a successor to take over, and whether he was developing his own sales routes. 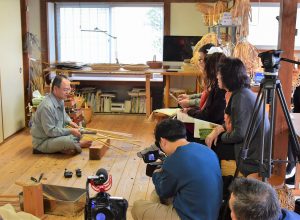 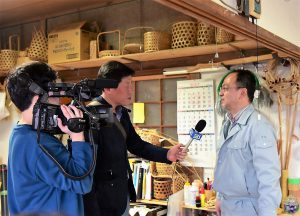 *Below are some of the articles and programs produced by the journalists based on this press tour.