The 2016 Jefferson Fellowships program of the East-West Center

From May 15 to 22, the journalists participating in the 2016 Jefferson Fellowships program sponsored by the East-West Center (located in Hawaii, U.S.) traveled to Japan. The FPCJ provided arrangements for their program in Japan.

The Jefferson Fellowships program was established in 1967 as a travel-study seminar to enhance mutual understanding between the U.S. and the Asia Pacific region, and every year over 10 journalists from the U.S. and Asia Pacific countries participate in the program. This year, the program was carried out over the course of three weeks to explore the future of growth in the Asia Pacific, with a total of 14 journalists from 10 countries including Australia, China, and the U.S. After visiting Hawaii and China, the fellows came to Japan for a week.

In Japan, the program focused on initiatives to create a new model for growth to boost the economy out of stagnation.

In Kitakyushu, the fellows interviewed Deputy Mayor Kazuhide Umemoto and visited Hydrogen Town, covering the city’s transformation from being known for pollution to becoming an “eco-model city.” 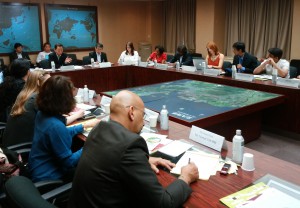 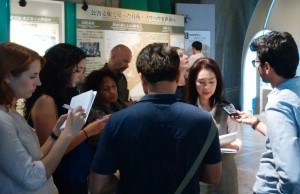 Next, as an example of how Abenomics is progressing, the group visited Fukuoka City, which has been designated as a National Strategic Special Zone to encourage private investment and the creation of new businesses. 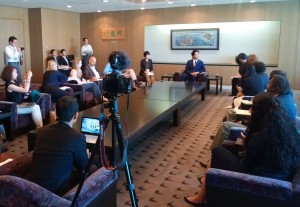 He spoke about Fukuoka City’s initiatives to create a climate encouraging people to come and start new businesses.

In Tokyo, the journalists examined Japan’s new economic growth strategy in light of globalization and the country’s aging society, visiting a preschool and a nursing home that employ seniors, and interviewing experts. 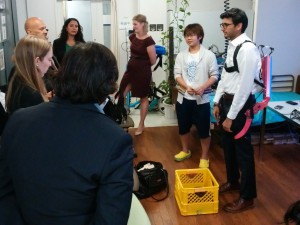 At the lab of Professor Hiroshi Kobayashi of Tokyo University of Science, the fellows were able to experience the Muscle Suit, hoped to be beneficial in healthcare and nursing. 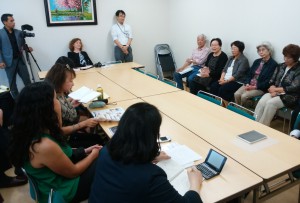 The fellows interviewed seniors working at special nursing home for the elderly Kashiwa Kohitsujien in Kashiwa, Chiba about the employment of seniors. 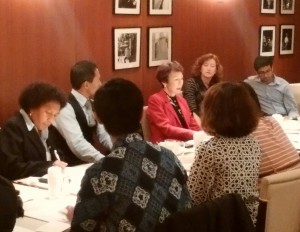 She engaged in lively discussion on topics ranging from the economy to Japanese corporate culture. 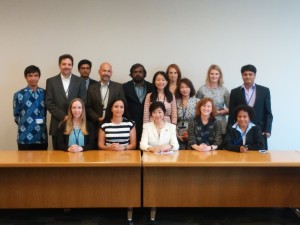 A variety of topics were covered, including Japan’s defense policy, female participation in the workforce, and economic growth strategy.