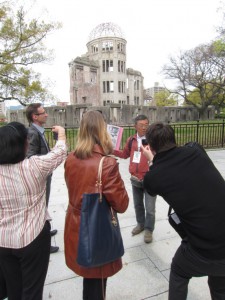 The 8th Non-Proliferation and Disarmament Initiative (NPDI) Ministerial Meeting and related events were held in Hiroshima on April 11 and 12, 2014. Under commission from the Ministry of Foreign Affairs, the FPCJ invited print journalists from Germany, Australia, Canada, Chile, Mexico, Poland, Turkey, the United Arab Emirates, Nigeria and the Philippines.

The report of the program is from here.

Several articles based on this group invitation have been released by participants. Some examples will be given below.
Translations for titles and summaries below are provisional translations.

Summary: Focusing on the experiences of Ms. Emiko Okada, who survived the Hiroshima A-bomb, this article covers several kinds of “suffering,” including the after effects suffered by hibakusha and the exhibits at the Hiroshima Peace Memorial Museum.

“Living with scars from the A-bomb” (Polish)

"One of last-remaining Hiroshima survivors calls for nuclear disarmament" (English)

Summary: This article introduces comments by people calling for nuclear disarmament, before the NPDI Ministerial Meeting. 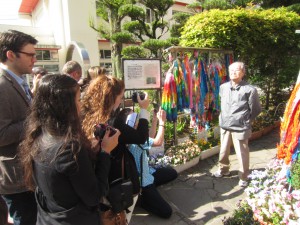 Summary: The experiences of Nagasaki A-bomb survivors Mr. Tsukasa Uchida and Mr. Matsuyoshi Ikeda are introduced, along with their messages for nuclear disarmament.

Summary: This article describes the damages inflicted on Hiroshima and Nagasaki by the atomic bombs.

Summary: This article describes the experiences of Ms. Emiko Okada and the after effects survivors suffer from.