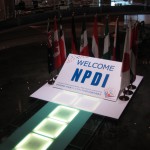 The 8th Non-Proliferation and Disarmament Initiative (NPDI) Ministerial Meeting and related events were held in Hiroshima on April 11 and 12, 2014. Under commission from the Ministry of Foreign Affairs, the FPCJ invited print journalists from Germany, Australia, Canada, Chile, Mexico, Poland, Turkey, the United Arab Emirates, Nigeria and the Philippines. All of these countries are members of the NPDI, and this was the first time any of these journalists had come to Japan.

The journalists spent a total of nine days from April 8 to 16 researching stories in Tokyo, Hiroshima and Nagasaki. The overall focus of the program was to have the journalists see directly the inhumanity of nuclear weapons, with Japan the only country to have suffered an attack with nuclear weapons. 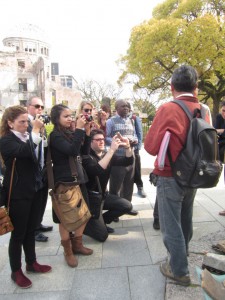 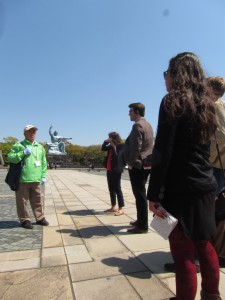 In Tokyo, there was a briefing to provide background information on the meeting, and a courtesy visit to Foreign Minister Fumio Kishida. In Hiroshima, official events were covered, in addition to speaking directly with atomic bomb survivors and visiting the Hiroshima Peace Memorial Museum. In order to cover the damage caused by the atomic bomb in more depth, more interviews with survivors were held in Nagasaki.

The schedule was extremely busy, but there was still enough free time to experience Japanese culture by visiting the Imperial Palace or exploring Nagasaki. The journalists involved have already published a number of articles, mainly focusing on the ministerial meeting. Look forward to a separate report on those.

You can find more pictures of the program from here.