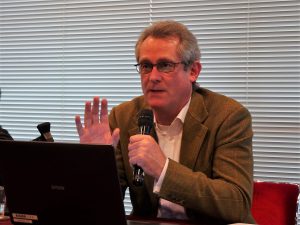 Setting a new record for the fifth year in a row, there was a total of 28.69 million inbound tourists to Japan in 2017, a 19.3% increase compared to the previous year. The Japanese government has set a goal of 40 million inbound tourists for 2020, the year the Tokyo Olympic and Paralympic Games will be held, and 60 million for 2030, as part of its growth strategy, and is working towards achieving that goal.

What should Japan do to promote hidden attractions that are still unknown, and become a tourism nation?

The FPCJ invited Mr. David Atkinson, CEO of Konishi Decorative Arts and Crafts Co., Ltd., and tourism advisor to the Japanese government and many local governments, to discuss this topic.

The briefing had a total of 46 participants, including journalists from China, South Korea, France, Germany, Denmark, and U.S.A.

*Related article in FPCJ Magazine Articles of the Month: