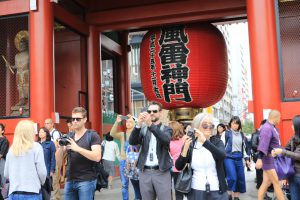 In an interview in Voice, Konishi Decorative Arts and Crafts Co., Ltd. CEO David Atkinson noted that despite the number of inbound tourists to Japan increasing up to 28 million in 2017, “There are too many people not thinking seriously about Japan’s tourism strategy,” warning that services and pricing with a “condescending attitude” are impeding the growth of the tourism industry. At the same time, stating that the tourism industry has grown to become the third key industry of the global economy, accounting for 10% of GDP worldwide, he argued that serious consideration should be given to positioning tourism as a “national project,” and examining how the tourism industry “can meet overseas demand.”

According to Atkinson, the Japanese tourism industry has more short-haul tourism (from within the region) than it does higher-spending long-haul tourism (from other regions). Stating that “tourism trends are determined by distance, not nationality,” he noted the inefficiency of Japan “losing when it comes to numbers of Western long-haul tourists” compared to Thailand. He further stated that the foundation of the tourism industry is “thinking about what kind of services and content will appeal to people” in order to attract tourists from overseas, warning that the attitude of “when in Rome, do as the Romans do” seen in Japanese tourism is “not an attitude that should be taken by a country bringing others in.”

Stating, “There are many Japanese people who are convinced that Japan is a unique country, and they can act like tourism is a seller’s market,” Atkinson called for reforming the Japanese style of tourism that ignores the circumstances of tourists and pushes Japanese attitudes on them. He questioned, “Why is so much effort put in promoting things that Japanese people normally don’t do (such as tea ceremony and flower arrangement) to tourists,” and called for the tourism industry to “put more emphasis on Japanese ‘fun’.’”

Atkinson also noted that despite Japan having a wide variety of tourism resources including history, culture, and food, “Without the infrastructure to utilize them, they are going to waste.” Stating that the tourism industry is part of the “national strategy,” Atkinson argued that nothing is more important than “the perspective of trying to increase ‘sales’ as much as possible through tourism.” He suggested “raising prices to see an actual increase in productivity,” and “creating sufficient added value to increase customer satisfaction high enough to support the price increase.” In response to the hopes that inbound tourists to Japan will increase with the 2020 Tokyo Olympics, he noted that the Olympics were only temporary, and “will not be a factor in stimulating the economy over the medium term.”