In the previous issue we introduced community-based local media along the coastal areas of Iwate Prefecture which have been working hard in the face of great damage sustained from the Great East Japan Earthquake.

As a second series of introducing local media in disaster-hit areas, we will introduce you, in this and the next issues, to three media in Ishinomaki City in Miyagi Prefecture and efforts by the office of Kesennuma City in the same prefecture to transmit information on reconstruction through English Facebook pages, which started up after the disaster. Following the disaster, disaster-affected areas started to make a variety of active moves of their own to send out news of their present situation; some community-rooted media started to make moves, adopting a motto, "Local information to local people," and another was newly launched for sending reconstruction news out to the world, triggered by the fact that the community had received a lot of support from all over the world. 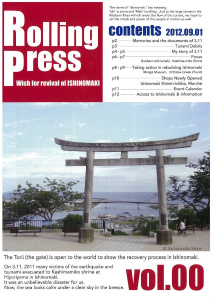 First, we introduce "Rolling Press," an English magazine issued in Ishinomaki City. This magazine (publisher: local and global contribution circle ‘Forum’) was launched in September 2012, about one and a half years after the disaster. This 10-page quarterly, 300 yen per copy, is printed in color in January, April, July and October. Yearly subscription both in Japan and from abroad is possible. Rolling Press carries "My story of 3.11," articles translated into English which are provided by the Sanriku Kahoku Shimpo Publishing Co. and the Ishinomaki Hibi Shimbun Co. Ltd. It also carries original articles about moves toward reconstruction or stores which have resumed business. Volunteers in and out of Ishinomaki who are eager to send information out from disaster-hit areas are supporting the quarterly’s production, from news gathering and article-writing to translation and editing.

Mr. Motokazu Arakawa who runs a company in Ishinomaki and who is chief editor, mentions the launching, "After the Golden Week consecutive holidays in May 2011, the number of volunteers was decreasing, but to the local people’s surprise, many foreign volunteers kept coming to Ishinomaki*…. In a symposium held one year after the disaster, I learned that there were almost no reports on how we were recovering, so I thought there should be a means of sending out information from disaster-afflicted areas."
※In the interview Mr. Arakawa referred to FPCJ's "Earthquake Volunteer Japan" tour that we introduced in "Watch Japan Now Vol. 6".

At present preparations are going on for the second edition of the quarterly to be issued in April. The second edition will feature a fish market that is back in business. "We will focus on timely subjects and stores rehabilitated with the help of foreign volunteers," the editors said. 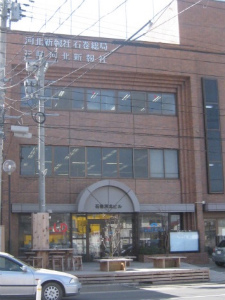 When the quake happened, the ensuing tsunami reached about 60 cm above the first floor of the company; power failure forced the company to give up on issuing its papers on March 12 and 13. The company went through many trials and resumed publication of the paper on March 14, though it had only two pages. They did this by storing articles and photo data into a USB flash memory and carrying it by car to the Kahoku Shimpo Publishing Co. in Sendai City. The Sanriku Kahoku Shimpo has renewed its editing system and now issues 40,000 copies of four to six pages.

Since the disaster, the Sanriku Kahoku Shimpo Publishing Co. has been proactively reporting on people's disaster experiences and the progress of reconstruction. In May 2011, it published a "Collection of News Photos -- A Massive Tsunami Came -- Records of Ishinomaki Area --". In August 2012, the publishing company issued, via Junposha Co. Ltd. in Tokyo, "Survival from Tsunami -- The Great East Japan Earthquake -- Narratives of 100 People in Ishinomaki Area," a collection of narratives of tsunami survivors carried in the newspaper. The newspaper company plans to publish an English version of this. 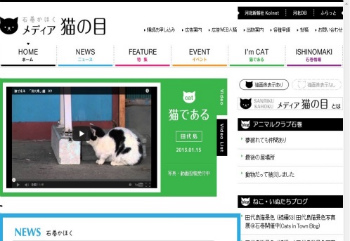 On March 11 this year, marking the second anniversary of the disaster, the company redesigned its website. The new page, "Ishinomaki Kahoku: Media: Eyes of the Cat," newly created in honor of Tashirojima Island of Ishinomaki City, a well-known island where local cats are loved very much by the people, is unique in that it does not look like the webpage of a newspaper company at a glance. "Like the cats that have been deeply involved in human life, we hope we can transmit local news from a local perspective," says the company's Office of Digital Media Strategy.

The next issue of "Watch Japan Now" will introduce another local paper in Ishinomaki, the "Ishinomaki Hibi Shimbun," which provides "Rolling Press" with articles, and the post-disaster efforts of Kesennuma City to send out information through English Facebook page.