Since the Great East Japan Earthquake on March 11, the affected areas have received a variety of support from both home and abroad. One such support was on-site volunteer activity. While some pointed out the actual number of volunteer workers was smaller than that in the Great Hanshin-Awaji Earthquake in 1995, the so-called “First Year of Volunteers in Japan,” volunteer activities in this disaster in Tohoku seem to have shown an increased diversity in organizing structures and systems.

The activity of “Earthquake Volunteer Japan” would prove such an increased diversity. The group works on a unique project to dispatch a group of Tokyo-based international businessmen and businesswomen to devastated Ishinomaki City (Miyagi Prefecture) for volunteer relief work.

What tour participants must supply themselves are only boots and gear. Other equipment including helmets and waterproof gloves, as well as English interpretation, is provided by the organizers. For Shinkansen tickets, food and three nights’ stay at a hotel, each participant pays 88,000 yen. While it is not very cheap, the tours attracted many people. The first tour received 40 applications, and the second, 60. The next tour planned for October had also already received more than 20 applications as of early September. 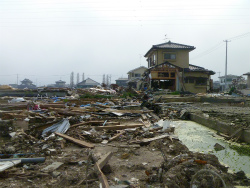 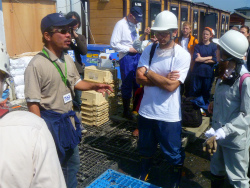 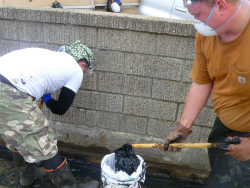 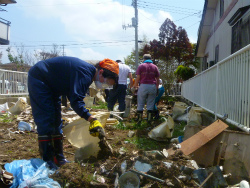 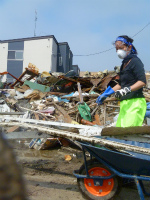 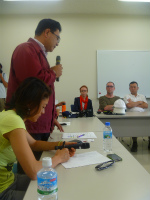 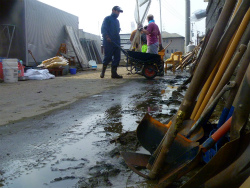 In the course of the tours, participants engage in mud digging, but also have a chance to look around damaged Ishinomaki City by bus.

Mr. Slater says, “The immediate purpose of this project is to allow employees to get a first-hand look at the situation.” But importantly his project has a bigger and longer-term goal, too. He goes on to say, “so that they [tour participants] can speak with experience and authority when their companies are considering different CSR (Corporate Social Responsibility) projects. Thus, this trip is a means to an end: the goal is to encourage CSR through a better understanding of the needs of the area and the ways that companies can contribute to helping revitalize Tohoku.”

About one third of the tour participants are Japanese who have such international experience as studying abroad, while the remaining two-thirds are foreigners from all over the world. The age range is broad, from senior managers and CEOs to first-year employees who are just getting to know the company. Most of the volunteers are in their late 20’s and early 30’s, and according to Mr. Slater these movers are looking to make positive changes in their company and Japan.

Earthquake Volunteer Japan is now thinking of expanding their relief work to outside Ishinomaki. Mr. Slater and Ms. Robinson are also considering how to get international schools in Tokyo to link up with schools in the Tohoku region through a support and exchange project.

(All photos were provided by Mr. David Slater)