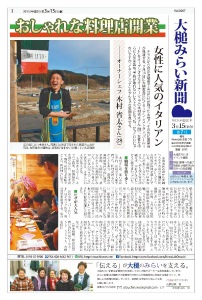 Before the disaster occurred, the Iwate Tokai Shimbun, local daily evening paper, had been for more than half a century an important news source for the residents of Kamaishi City, Miyako City, Otsuchi Town and Yamada Town, along the northern part of Iwate Prefecture. The tsunami, however, swamped the rotary press, and the paper was forced to discontinue publication. At a time when the local people were most in need of daily information, there was no newspaper.

Otsuchi Town, adjacent to Kamaishi City, was one of the municipalities whose residents were getting insufficient information because of the discontinuation of the Iwate Tokai Shimbun. On top of that, the geography of the town prevented information about it from getting out; though it had sustained enormous damage, the town could get neither enough assistance nor volunteer helpers.

In September 2012, therefore, the Otsuchi Mirai (future) Shimbun was published to support Otsuchi’s reconstruction by providing information about it inside and outside the town. The publisher, “NewsLab Otsuchi,” was set up as a news-transmission station in Otsuchi by the “Japan Center of Education for Journalists,” which has been blazing a new trail in new information transmission in the era of social media and “Volunteer Info,” an NPO sending out information on volunteers. “NewsLab Otsuchi” received its activity fund from the Internet site, “ReadyFor?”, the reconstruction assistance foundation of Mitsubishi Corporation, and others. 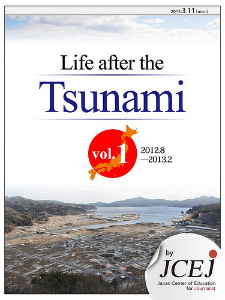 The most conspicuous feature of the “Otsuchi Mirai Shimbun” is that it is issued in both paper and social media form. The paper version is issued once a month centering on topics that encourage the disaster victims and is delivered free to all the households, including those in temporary housing, in 48 places all over the town (circulation: 5,000 copies). As social media can be accessed by anyone in and out of town at any time, its contents are updated almost every day, including many of the victims’ personal narratives of the tsunami that cannot be carried in the paper version. “At first we were planning to mainly use the Internet, but many of the Otsuchi residents do not use the Internet, so we have the present ‘hybrid’ publication,” says Mr. Hiroki Matsumoto, the person in charge in Otsuchi.

Mr. Matsumoto was a former reporter of the Ibaraki Shimbun, a local newspaper of Ibaraki Prefecture. He used to be the media project manager in charge of the website and twitter of the paper. He learned about that Otsuchi had lost its local media and moved to the town in July 2012 to help its reconstruction through sending information; he has been doing his utmost, together with two resident staff, student interns, and other helpers.

Another big feature of the Otsuchi Mirai Shimbun is that it is the residents themselves who are transmitting information on the present situation and attractions of Otsuchi. With like-minded persons, Mr. Matsumoto has held lessons on photo-taking more than 60 times, thus making efforts to let the residents know what fun it is to send information out; at present about 30 town-reporters are contributing photos or reports to the Otsuchi Mirai Shimbun. Last month exhibitions of photos taken by residents were held in Tokyo and Yokohama as well as Otsuchi Town, and the current situation of a disaster-hit area photographed by local grandpas and grandmas grabbed people’s attention. “Some said they didn’t want to take photos again as the tsunami had washed all their precious pictures away. But some said taking photos gave them a reason for living. . . . I hope the Otsuchi Mirai Shimbun will develop into a media to be run by the town’s residents themselves,” Mr. Matsumoto said.

In March this year, two years after the disaster, an electronic book was published on Kindle, collecting past articles of the paper. And, can you imagine, an English version is also available! We understand that many Japanese and foreign volunteers who had learned about the activities of the Otsuchi Mirai Shimbun helped with the translation, which brings home to us the strong influence of the Internet and social media. 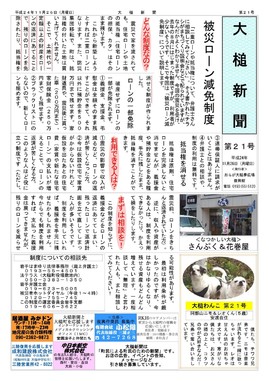 Otsuchi Town has another local media which was launched when there wasn’t enough information after the disaster: the Otsuchi Shimbun. Oraga-otsuchi Yumehiroba (My Otsuchi’s Dream Square),” a general incorporated association that has been carrying out projects for the town building of Otsuchi, has issued this paper every Monday since June 2012, commissioned by the town office.

Targeting the residents in Otsuchi, the Otsuchi Shimbun aims at providing them with a lot of information and getting them involved in town building. Information that the residents really need such as the town’s reconstruction projects or measures for restoring people’s lives, is very hard to understand from the data that the town provides; the Otsuchi Shimbun explains such information as plainly as possible from the perspective of the town’s residents. Copies of the paper are freely distributed mainly in temporary housing, and sent to former residents who have evacuated to other places if they request it. The paper, printed on both sides of A3 paper, will soon have four pages. 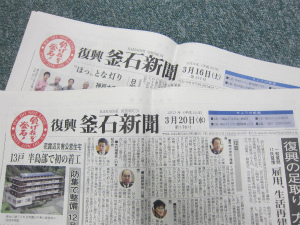 The Fukko (Reconstruction) Kamaishi Shimbun of Kamaishi City is the last local paper we introduce. This new local paper was launched in June 2011 mainly by former reporters of the Iwate Tokai Shimbun, which had been discontinued three months before. The new paper (publication: 20,000), published on Wednesdays and Saturdays, is delivered to all the households of Kamaishi City including those in temporary housing, providing them with the local information they need for reconstruction. 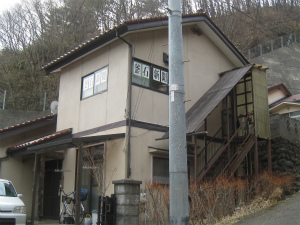 「It is the 13-strong staff including Mr. Kawamukai and other former employees of the Iwate Tokai Shimbun that supports the publication of the Fukko Kamaishi Shimbun. The paper’s office, on the second floor of a private house in Kamaishi, is filled with PCs for editing and back numbers of the paper. With a view to delivering the paper to all the households in Kamaishi City, the paper has a delivery system comprising 140 people including the city’s liaison officers.

Mr. Kawamukai says, “We have been managing to issue the paper twice a week, but it seems that the readers read the paper very carefully and that they like it. . . . As we are commissioned by the city office, we are only thinking of providing information to the residents of Kamaishi, but we have inquiries one after another from outside media organizations and others.”