Eleven years have passed since the Great East Japan Earthquake and TEPCO Fukushima Daiichi Nuclear Power Plant accident. This press tour visited municipalities around the Fukushima Daiichi Nuclear Power Plant, covering environmental remediation initiatives the Ministry of the Environment carried out in Fukushima since the nuclear accident, as well as the progress of reconstruction as people work to rebuild their lives while facing various challenges.

A total of ten journalists joined the tour, from media organizations based in Australia, China, France, France/Germany, Singapore, South Korea, and Taiwan.

*This press tour was sponsored by the Ministry of the Environment, and planned and operated by Foreign Press Center Japan.

*For details on the tour stops, see the press tour notice.

This museum opened in September 2020 in order to pass on the records and lessons of the complex disaster to future generations. Guided by Deputy Director Masafumi Goto, the tour saw exhibits showing what the disaster looked like, such as a fire engine which was damaged in the tsunami, and passing on the lessons of the nuclear accident. Mr. Isuke Takakura, a local resident who experienced the disaster and now a storyteller of the disaster, spoke to the journalists, and they asked questions about life during evacuation and his thoughts on returning home. 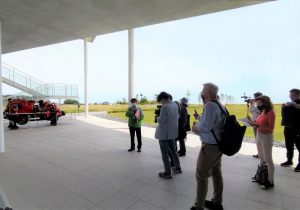 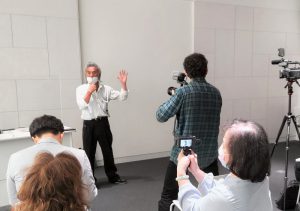 Ministry of the Environment Briefing

The Ministry of the Environment officials gave a briefing on environmental remediation in Fukushima, a project at a scale and with methods not seen before in Japan, including decontamination and disposal of contaminated waste. The journalists asked questions included what the overall budget for the project was, and how many people were working on it.

The tour visited the Interim Storage Facility, which was built to provide a safe, centralized place to manage and store removed soil and waste produced by decontamination efforts in Fukushima Prefecture until it can be permanently disposed of. While listening to explanations by a Ministry of the Environment official, the journalists saw the Soil Separation Facility and Soil Storage Facilities, and took many photos and videos of the large numbers of heavy machinery in action.

Mr. Shubun Endo, president of Tomioka Wine Domaine, began growing wine grapes after the disaster in order to create a new attraction in his hometown of Tomioka. The tour visited a vineyard where grape seedlings had been planted, and spoke with Mr. Endo and staff who moved to Tomioka out of a desire to work at the vineyard. The journalists seemed impressed when Mr. Endo spoke about his thoughts on making wine and his hometown: “It is important to try new things. Just doing what is expected will not interest anyone... Wine industry can involve a variety of areas including tourism and the service industry, and I hope people from around the world will visit here in the future.”

The tour visited Nexus Farm Okuma, a farm using the latest technology to grow strawberries in Okuma, where evacuation orders were lifted for part of the town in 2018. Farm manager Mr. Shingo Tokuta gave a briefing on the business, followed by a tour of a greenhouse with around 20,000 of the strawberry plants they are currently cultivating. Journalists asked questions about the current employment situation at Nexus Farm Okuma and in Okuma in general, and about future plans for the business.

All of the residents of Futaba are still evacuated due to the nuclear accident, but soon the evacuation orders are planned to be lifted for the Specified Reconstruction and Revitalization Base located around JR Futaba Station, and residents will begin to return. Guided by the Futaba Town Hall officials, the tour saw the area around Futaba Station and the Shinzan district, where there are still collapsed buildings and empty lots after buildings have been dismantled. The journalists showed great interest in both the past and present of the town, as they visited Futaba Minami Elementary School which has been left as it was since the students evacuated in a rush after the earthquake, as well as the rebuilt Futaba Station and reconstruction public housing being built in preparation for the return of residents. The journalists asked a number of questions about the thoughts of the town hall employees as they waited for the residents to return. 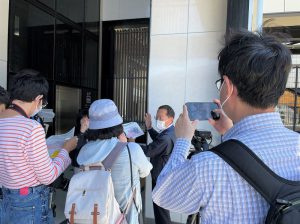 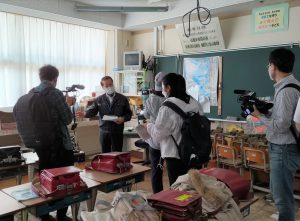 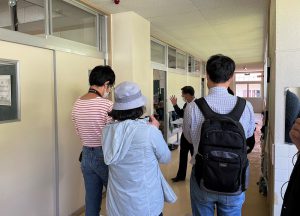 The tour saw hydrogen storage tanks and exhibition spaces, guided by a Namie Town Hall official, while hearing about the town of Namie’s plan for recovery using locally-produced hydrogen. The tour was able to see a field full of solar panels from above, and a portable hydrogen station using hydrogen produced at the FH2R in the town’s industrial complex. The journalists asked questions about the significance behind one of the world’s largest hydrogen manufacturing research plants using renewable energy being built in Namie, and how hydrogen was being used in the town. 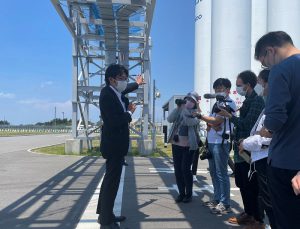 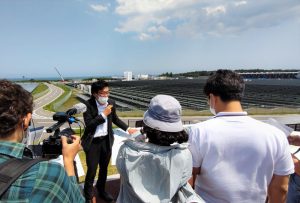 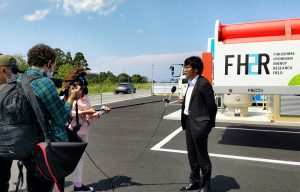 In the Nagadoro district of Iitate, a demonstration project for recycling removed soil is being carried out. After a briefing on the project by a Ministry of the Environment official, the tour saw how the removed soil was recycled, and tests for using the recycled material in farmland. The journalists then interviewed Mr. Yoshitomo Shigihara, the former administrative head of Nagadoro, and asked about his thoughts on this national demonstration project and his hopes for Nagadoro’s recovery.

◆Below are some of the reporting based on this tour.