Miyazaki Prefecture, where toasts are made with not beer or sake, but shochu, has been the top producer of shochu in Japan for six years in a row. In Miyazaki, Shochu is made with a variety of ingredients in each area depending on the local climate and weather, including potatoes, rice, barley, and buckwheat, and like wine it is possible to appreciate the terroir of shochu, making it one of Miyazaki’s attractions.

A total of seven journalists participated in this press tour, from media organizations based in France, Hong Kong, Singapore, Taiwan, and the US. Covering the preparations for brewing potato shochu, which can only be seen in fall when the sweet potatoes used for the shochu are harvested, they learned about shochu’s appeal, which is still not well known overseas.

Yanagita Distillery has been making shochu from barely and sweet potatoes for the past 120 years. The fifth-generation owner, Mr. Tadashi Yanagita, spoke to the journalists about his passion for making shochu after quitting his job as an engineer to take over the family business, and also his efforts to develop products to appeal to foreign markets. After experiencing how the ingredients and distillation methods change the flavor of shochu (with a tasting), the group toured the sweet-smelling interior of the distillery, getting to taste some of the freshly steamed sweet potatoes used to make shochu and seeing the secondary moromi (mash) of some recently prepared potato shochu bubbling away as it fermented in a tank. The journalists asked a variety of questions, about initiatives to increase export sales and the impact of the COVID-19 pandemic. 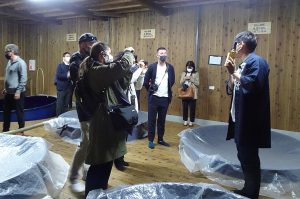 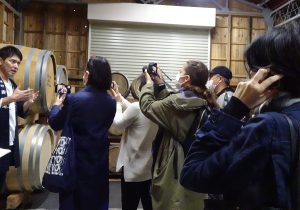 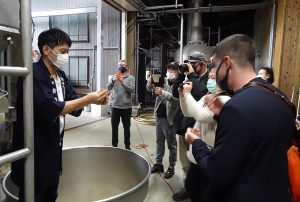 Miyakonojo, with the highest total output value in the country for beef cattle, pork, and chicken, has started a “meat tourism” project using its specialties of meat and shochu to bring in tourists. At the Tokiwaso ryokan, located at the foot of the Kirishima Mountains, the tour ate Miyakonojo meat dishes, including quality beef brands, and heard from the Miyakonojo City Miyakonjo PR Section about meat tourism and the appeal of Miyakonojo, the hometown of meat and shochu. 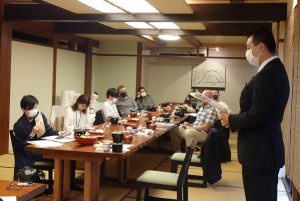 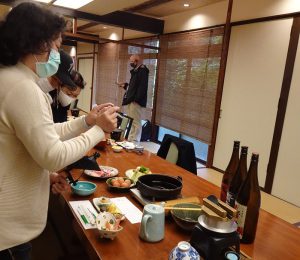 Watanabe Distillery makes shochu as a family, using its own homegrown sweet potatoes in the belief that “making shochu starts from the field.” The fourth-generation owner, Mr. Koichiro Watanabe, showed the tour around the distillery, and the sweet potato fields that were at the peak harvesting period. He explained, “We are making shochu which is dependent on this land and climate,” and showed how they prepared the sweet potatoes for distilling with a little soil still on them to help take advantage of the natural yeast, which made a strong impression on the journalists. Mr. Watanabe also explained how the distillery is an early adopter of sustainable distilling, recycling 100% of the waste liquid leftover from distilling shochu as fertilizer or for other purposes. The journalists asked questions such as about how climate change would affect “making shochu which is dependent on the climate.” 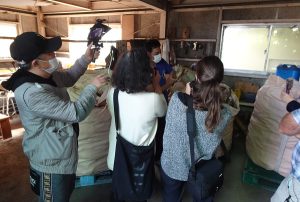 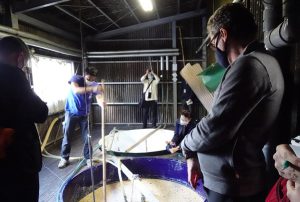 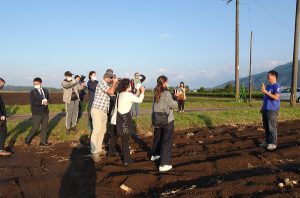 The journalists took plenty of pictures while visiting the fish market where the day’s catch was being auctioned off. Next, they heard from Mr. Shunroku Onitsuka, consultant to the Nango Chamber of Commerce, about pole and line skipjack tuna fishing in Nichinan, which has the largest catch in Japan, showing the equipment used while explaining. This was followed by experiencing pole and line fishing using VR goggles. Nichinan’s pole and line skipjack tuna fishing prioritizes preserving the skipjack stocks over efficiency and has been carried out for 300 years. In February 2021, it was designated as a Japanese Nationally Important Agricultural Heritage System. 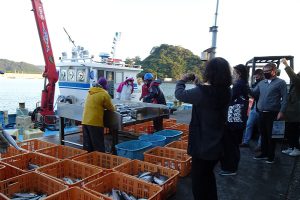 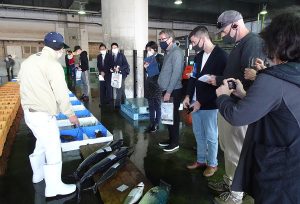 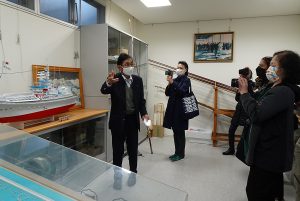 Ms. Masako Furusawa, the fifth-generation owner of Furusawa Distillery, showed the tour around the distillery, the only one in the prefecture made in the dozo style (earthen and plaster construction), where shochu is carefully made using traditional techniques. The preparation room has rows of large clay jars. Ms. Furusawa explained that her distillery tried to avoid using machinery as much as possible, and made shochu by hand while working with nature, such as the temperature and humidity that year. However, she also commented that in recent years the temperature has been rising and Nichinan has had days in summer that recorded temperatures over 35°C, so she wasn’t sure how long they would be able to continue using traditional methods. The journalists showed interest in the impact climate change was having. To end, the journalists sampled some shochu to see how the aging process changed the flavor of shochu, as well as having it paired with local Nichinan cuisine. The journalists also asked questions related to how Ms. Furusawa is one of the few woman master distillers in Japan. 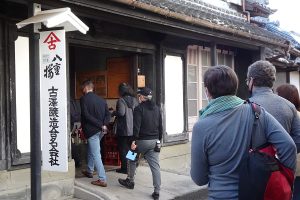 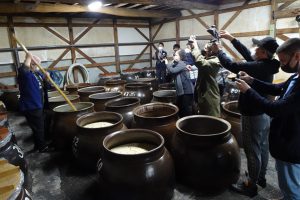 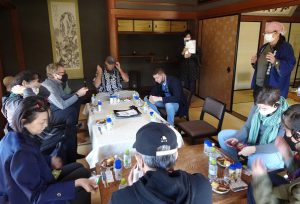 Inoue Shuzo uses water from a spring in the distillery grounds, which was selected as one of the “21 Famous Waters of Miyazaki,” in its shochu. Led by Mr. Masahiro Mera, director of Inoue Shuzo’s manufacturing section, the tour saw the distillery where around eight tons of sweet potatoes can be processed daily for use in shochu, and received explanations about the company’s expansion into overseas markets and its pioneering efforts in distillation at reduced pressures. The journalists also saw where over 2000 sturgeon are being farmed, as part of Inoue Shuzo’s efforts which began 10 years ago to farm sturgeon using their “famous water.” After hearing an explanation of how long it took to raise sturgeon and how they were farmed, the journalists sampled the company’s Nichinan Caviar and Smoked Caviar Fish paired with its shochu. 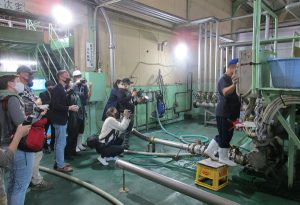 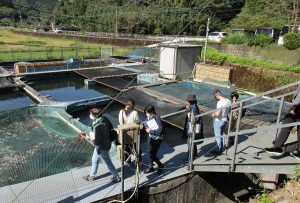 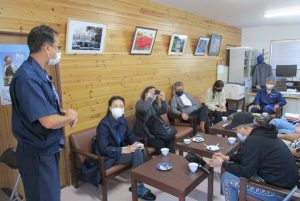 In Obi, known as “Kyushu’s Little Kyoto,” the tour ate delicious local cuisine for lunch while viewing a beautiful Japanese garden in Hattoritei, a restaurant located in a historical residence. Afterwards, staff from the Nichinan City Hall Tourism/Sports Department guided the tour to popular Obi tourist spots, Obi Castle and Yoshokan, an old samurai house. The tour also covered shihan mato, a type of archery passed down in Obi as entertainment while drinking shochu and a registered Intangible Cultural Property of Nichinan City. The journalists tried it out as well, but it is quite difficult to hit the target, and they tried numerous times with serious expressions. 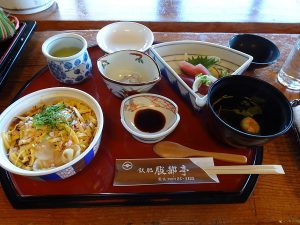 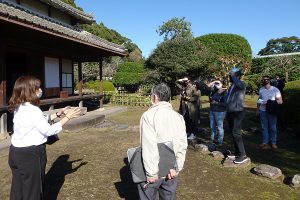 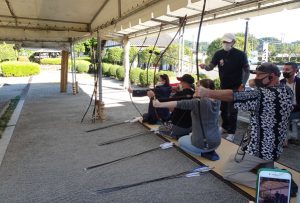 The last stop on the tour was Udo Shrine, located in a natural cave on a cape along the coast of the Pacific Ocean and with its main building brightly painted with red lacquer. Mr. Nobuaki Nakatake, a priest at the shrine, showed the tour to the main building, and explained the myth behind the origin of the shrine. The journalists took plenty of photos of the beautiful scenery of the red lacquer gate and bridge with the blue waters of the Nichinan Coast and a sheer cliff face in the background. 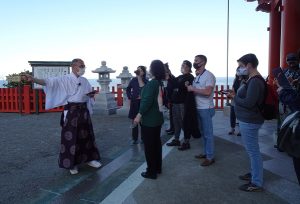 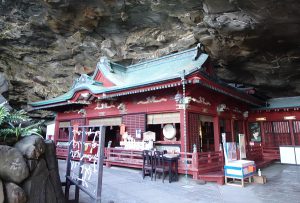 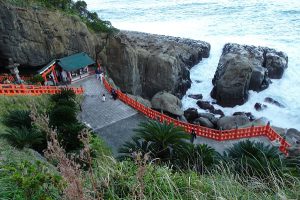 ◆Below are some of the reporting based on this tour.

Stars and Stripes (US/ Newspaper)