The Tokyo Tokyo FESTIVAL, held by the Tokyo Metropolitan Government, is an initiative to create a sense of cultural festiveness and promote Tokyo to the world as a city of arts and culture on the occasion of the Olympics and Paralympics.

A press tour for foreign correspondents was held to cover the Tokyo Tokyo FESTIVAL.

This press tour covered Pavilion Tokyo 2021 and Super Wall Art Tokyo, two of the projects selected from over 2,436 entries as the Tokyo Tokyo FESTIVAL Special 13, key projects for the Tokyo Tokyo FESTIVAL. A total of 11 journalists joined the tour, from China, France, Germany, Hong Kong, Russia, and Taiwan. During the tour, they interviewed artists and others involved in the project, and filmed and photographed art pieces.

Participating journalists commented, “It was good to have an opportunity to hear directly from the artists,” and, “I learned a lot,” and news reports have been released based on this press tour.

▷For more details on the stops on this press tour, see the tour announcement.

The group of journalists covered the Obliteration Room, a piece created by Ms. Yayoi Kusama and one of the Pavilion Tokyo 2021 pavilions. Visitors place colorful round stickers in a room where the walls, floor, furniture, and everything else are painted completely white, gradually “obliterating” the furniture and walls as they blend together. Ms. Kusama has made similar installations before both inside and outside Japan, but this was the first time that a Japanese-style room was included. This room had tatami floors, as well as traditional Japanese blinds and a mosquito coil.

While there, the tour interviewed Mr. Koichi Watari, CEO of the Watari Museum of Contemporary Art and head of the Pavilion Tokyo 2021 Development Committee. When asked why this piece was chosen for the Olympics and Paralympics, he responded, “The different colors of stickers are like different countries. As the concept of color is slowly obliterated, it is like the world becoming one.” 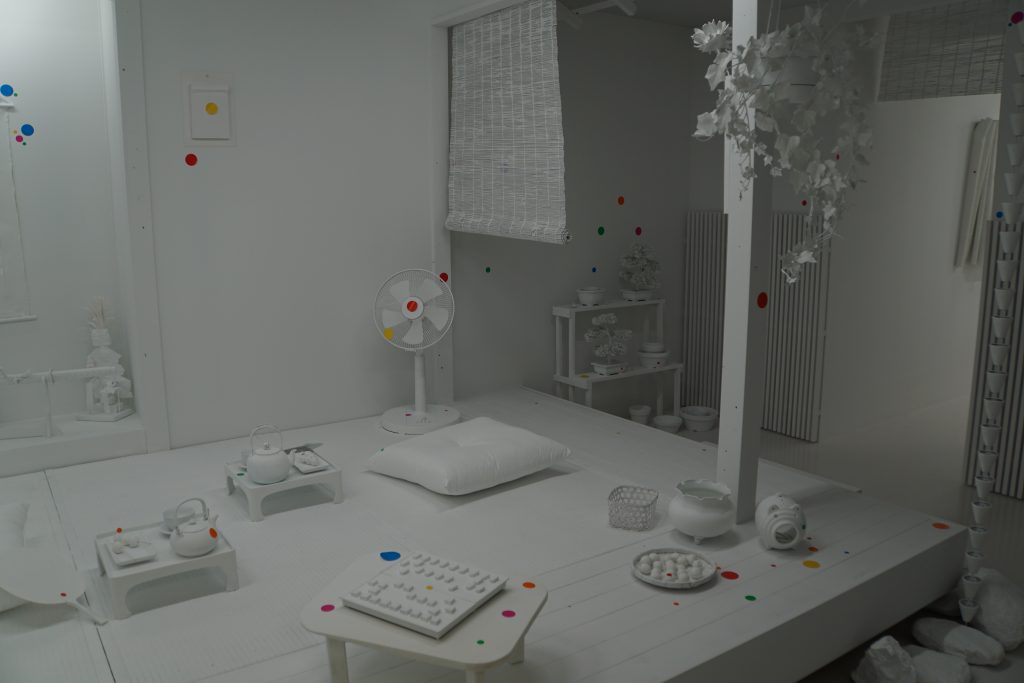 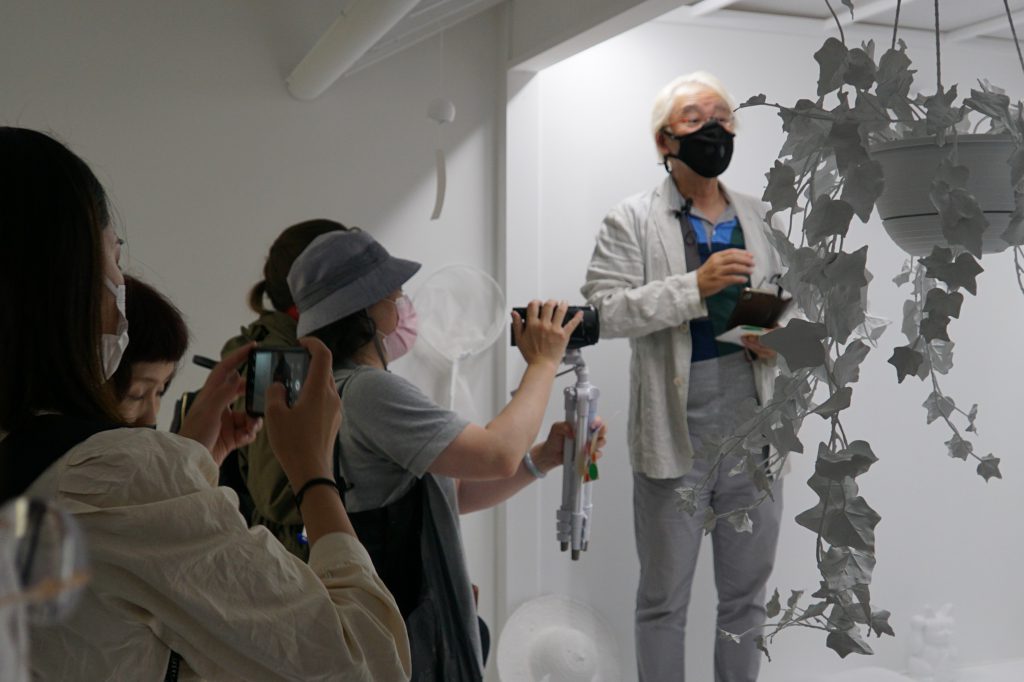 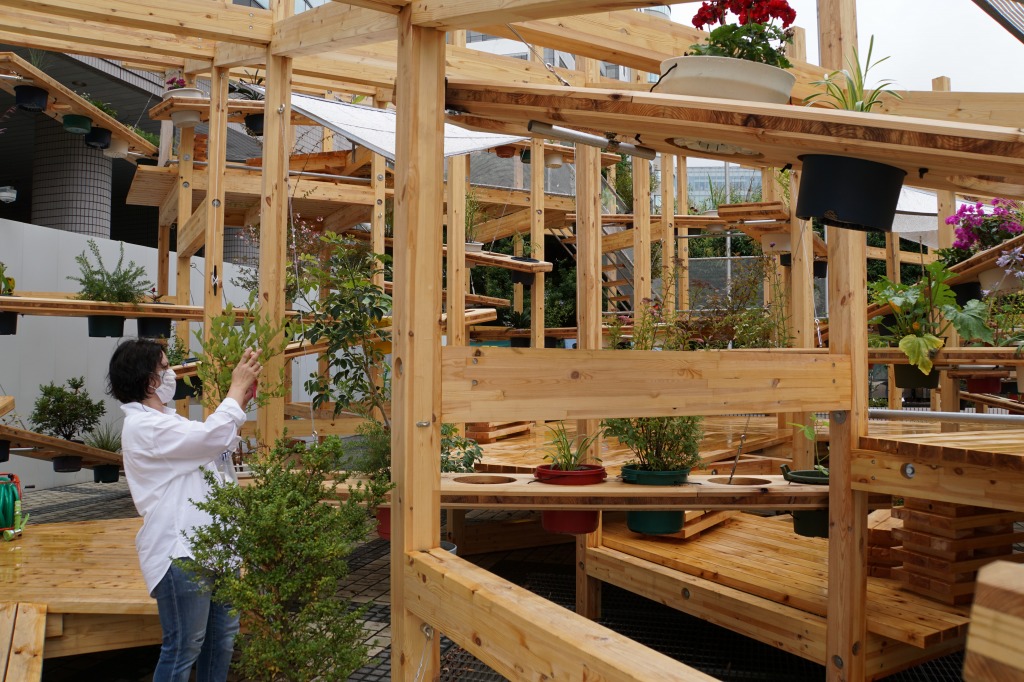 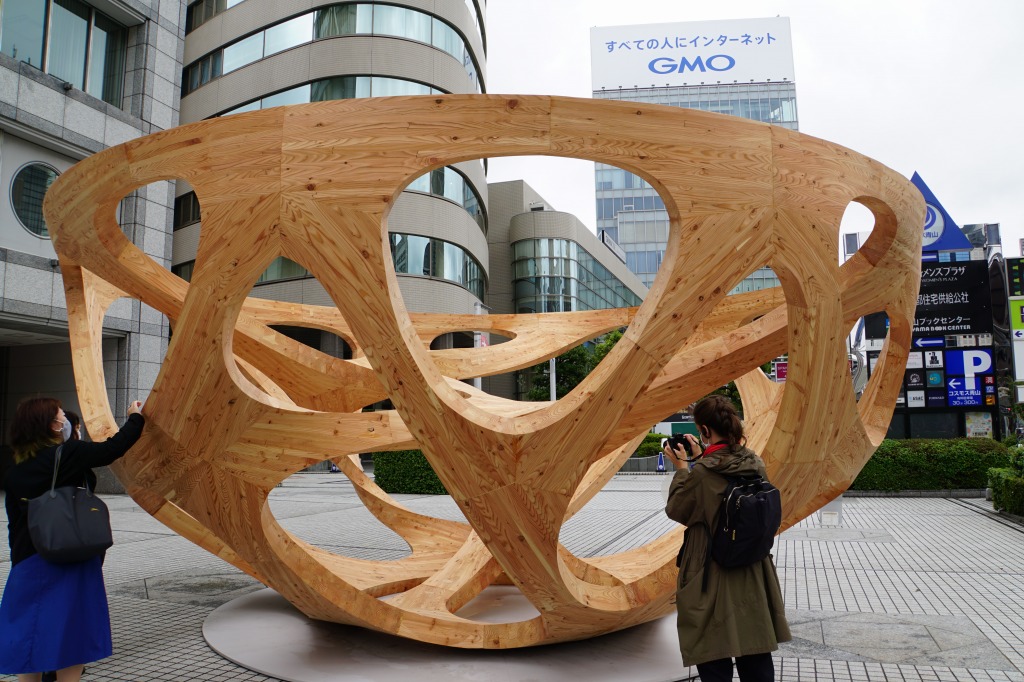 The small tea house "Go-an" appeared in front of the Japan National Stadium, the main stadium for the Olympics and Paralympics. The second floor, approximately 8 square meters, has a view of the stadium, and the tea house provides a sense of time passing slower despite being in the middle of Tokyo.

The journalists heard from designer Mr. Terunobu Fujimori about the concept for this tea house. One journalist commented, “There is a sense of serenity when in the tea house.” 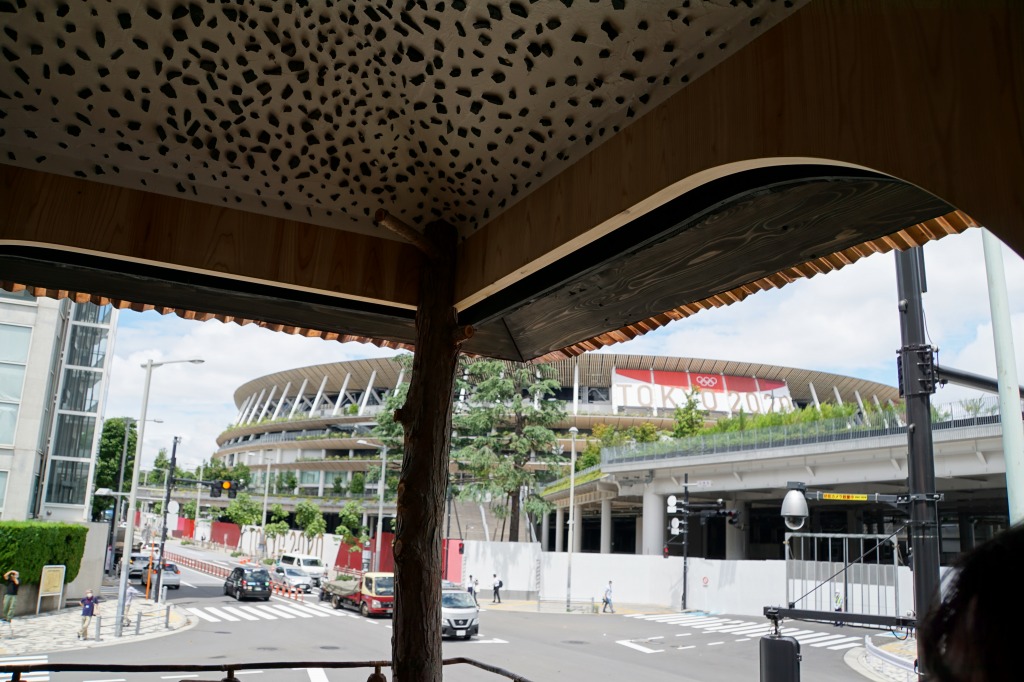 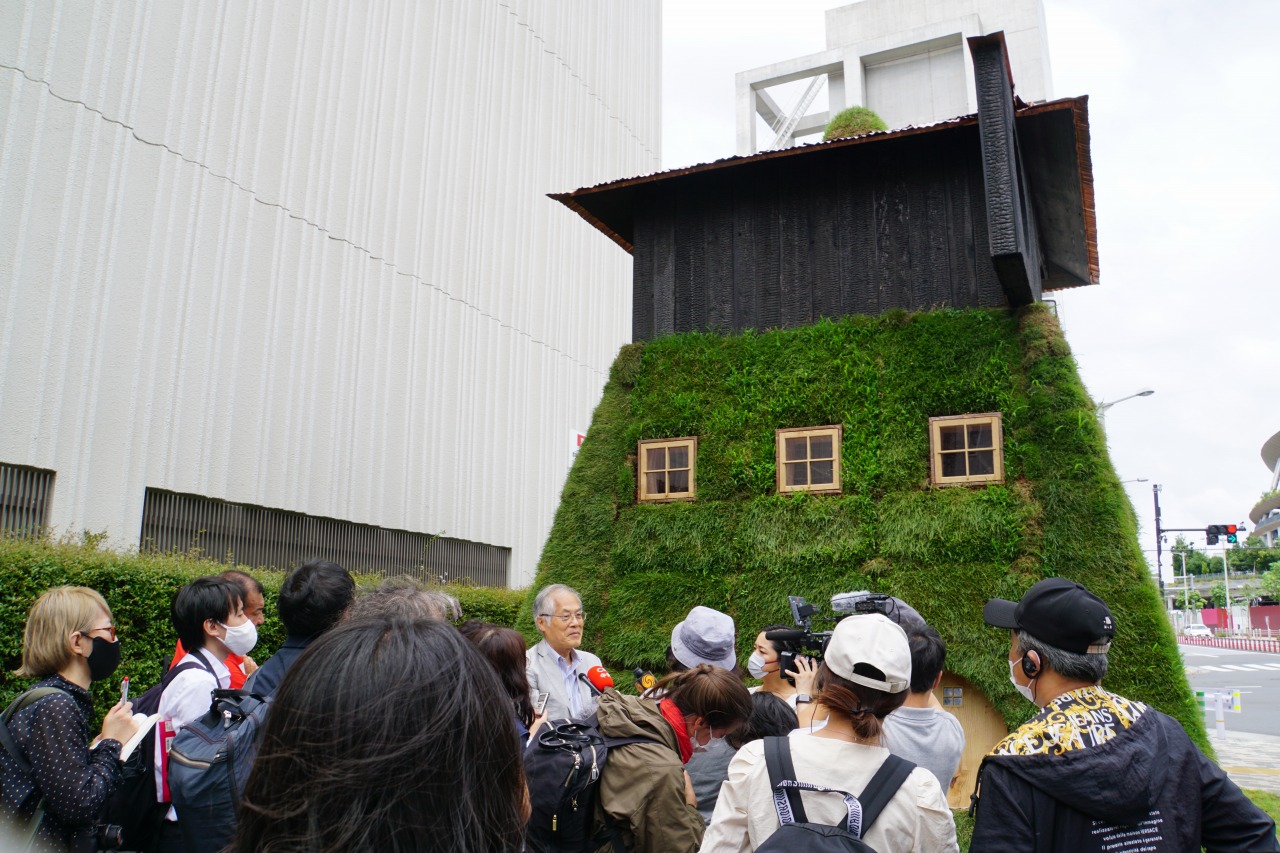 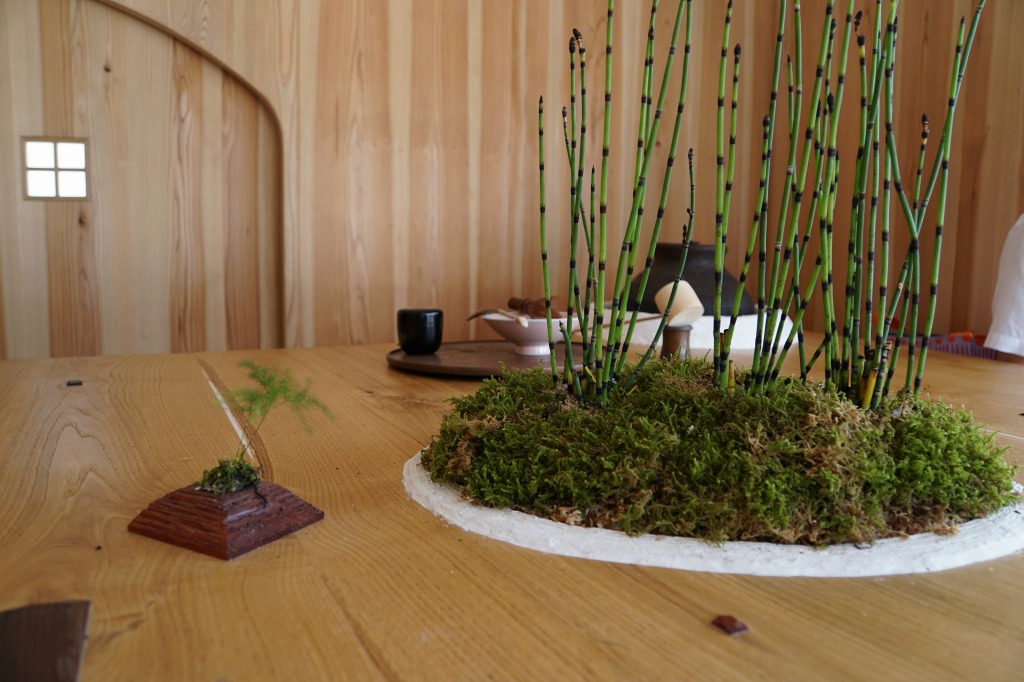 Tokyo Castle is an odd couple of castles: an 8-meter castle made out of cardboard, and a 4-meter castle made out of blue tarps. Although Japan is hosting spectacular events like the Olympics and Paralympics, over the past 25 years the country has faced the Great East Japan Earthquake, a nuclear disaster, and a long-term economic depression, followed now by the COVID-19 pandemic. Tokyo Castle’s creator, Mr. Makoto Aida, chose cardboard and blue tarps as the materials for these castles to emphasize not permanence, but instead impermanence, unreliability, and worthlessness—yet the castles continue to stand bravely despite those flaws. 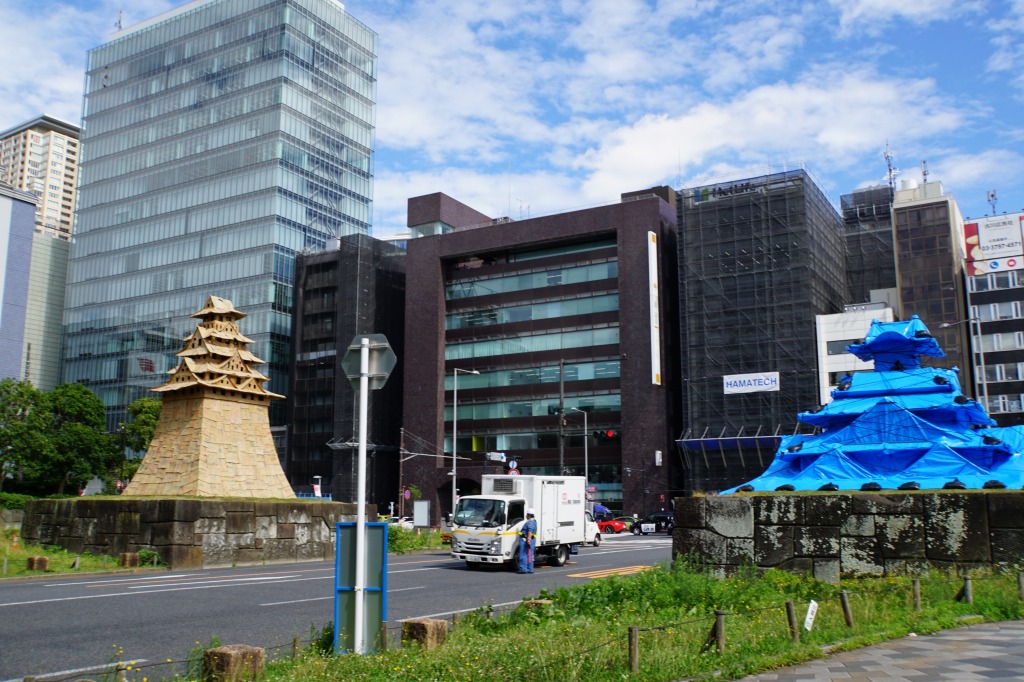 The journalists on the tour asked Mr. Aida many questions as they interviewed him, such as why he chose cardboard and blue tarps as the materials to use. 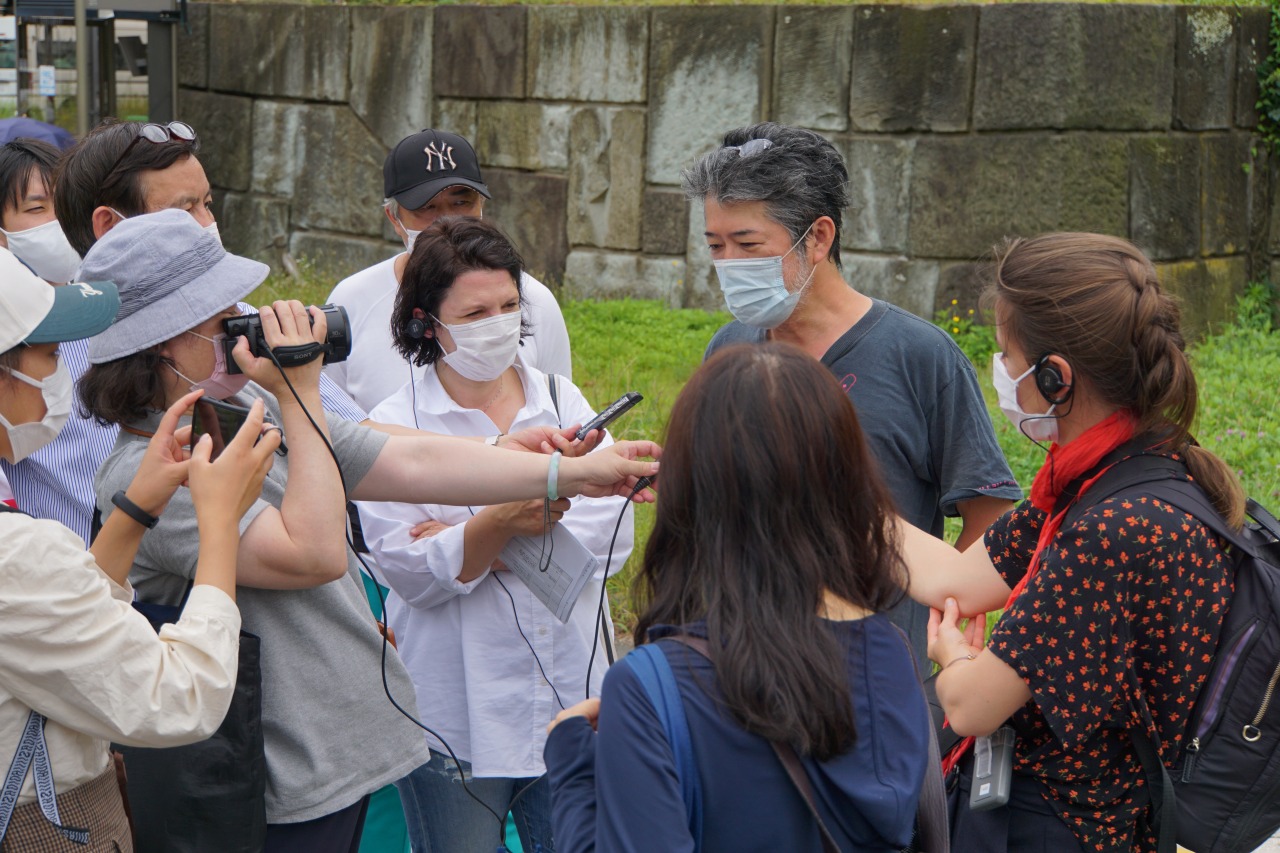 Super Wall Art Tokyo is a project using the glass walls of the Marunouchi Building and New Marunouchi Building, landmarks of the Marunouchi area of Tokyo, as canvases for two giant pieces of wall art around 150 meters tall and 35 meters across. The wall art was made by Mr. Tadanori Yokoo, who was a member of the design team for the 1964 Tokyo Olympics, and his daughter, Ms. Mimi Yokoo. With a total area of over 7,000 square meters, this is the largest display of wall art in the world. 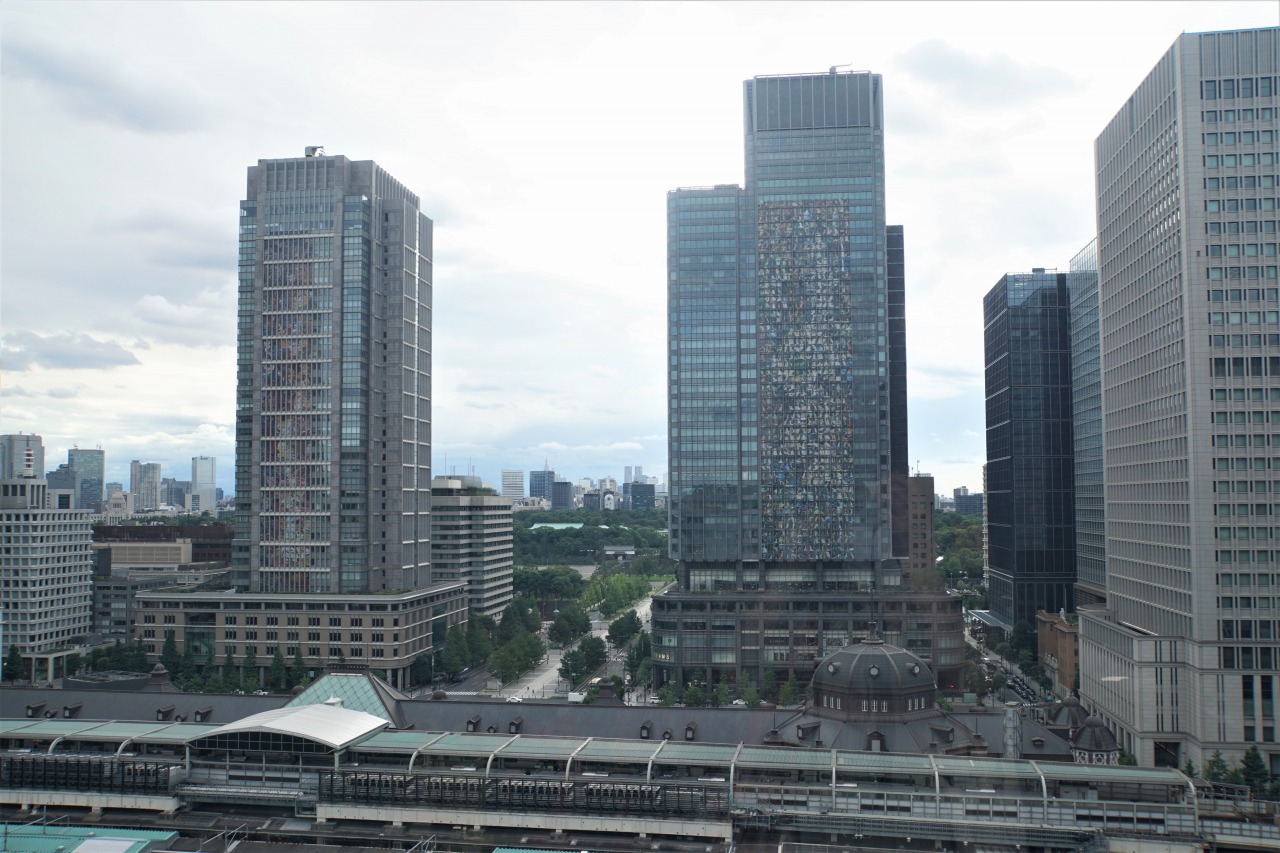 According to the project’s creative director, Mr. Naoya Hosokawa of Drill Inc., “With the world’s eyes on Tokyo due to the Tokyo Games, I wanted to show wall art, the foundation of art which has existed since ancient times, in a manner without equal.” When asked by a journalist about the significance behind holding an art project to coincide with the sporting events of the Olympics and Paralympics, Mr. Hosokawa responded, “As the host city receives a lot of attention, I think it is a good opportunity to promote the culture of that city and country. That is why we participated as well.” The journalists took pictures from a variety of angles as they faced the largest wall art in the world. 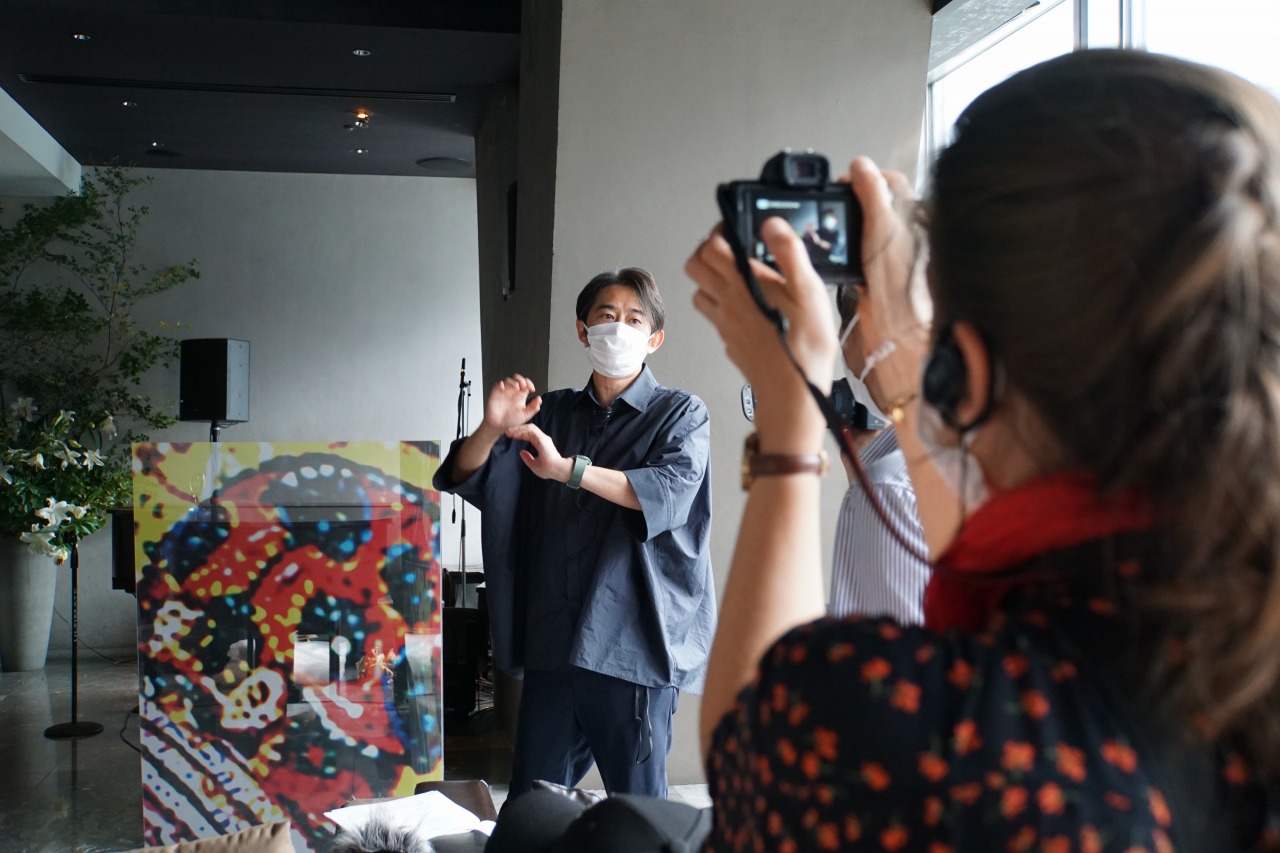 ◆Below are some of the reporting produced by the journalists based on this press to ur.