The city of Sendai has been promoting creative industry catalyzed by art and culture. Ten correspondents from six media organizations from China, Taiwan, Korea, France, Spain and Indonesia joined the tour to see the city's efforts to enhance this new industrial development.

The participating journalists visited Tohoku Kogei Co. Ltd. followed by a briefing on animation industry promotion by a Miyagi Prefectural official. Tohoku Kogei, a traditional Tamamushi lacquerware maker in Sendai, has succeeded in making a new product, using animation characters of "Sengoku BASARA". After visiting the factory, the journalists had an opportunity to try making “Sengoku BASARA” postcards themselves.

A glass artist, Mr. Koji Murayama of Kaiba Glass Works, talked about his glass works, which are made with desert sand and his environmental craftwork. The city has various support programs for creators in Sendai. One of their projects, which is a collaborating with art and industry called "Sendai Glass Project" has a goal of making glass products using sand from the rivers around Sendai on an industrial basis.

In February 2010 the creative sharing office "TRUNK", which was converted from a business hotel, was opened in Sendai. This facility is a part of the support projects for young creators in Sendai to build a better regional community by sharing the knowledge and skills of different genres of creators.

Sendai Mediatheque, an oasis of relaxation for locals, makes a great contribution to the city's development by attracting more than a million visitors every year. This cultural-arts complex was designed by the world recognized architect Mr. Toyo Ito, and draws many visitors from overseas. The participating journalists learned of the high level of cultural standards in Sendai through this tour. 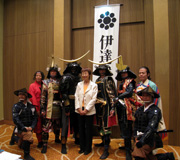 The journalists had a chance to appreciate the city's various attractions from its history to culture introduced by Ms. Emiko Okuyama, Mayor of Sendai. During the question-and-answer session, the journalists covered all kinds of topics, such as the city's industry, education, politics and economy. At the end of the tour, the city's tourism promotion team, "Date Sengoku Bushotai",troops of the Date Warlord, welcomed the journalists.