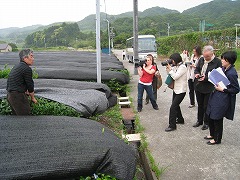 Various researches are starting to reveal that green tea contains many components that are good for human health. The press tour to Shizuoka, co-hosted with Shizuoka Prefecture, featured “frontline green tea research and bio-farms at the foot of Mt. Fuji.” Seven correspondents from six media organizations fromFrance, Germany, Taiwan and the United States joined the tour. 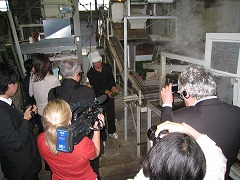 The participants first visited Shizuoka O-cha Plaza in front of JR Shizuoka station, and had a briefing on the green tea production and consumption of the prefecture, which has 40% of Japan’s crude tea output, and the outline of the 4th International Conference on O-CHA Culture and Science scheduled in October this year. Then they visited the tea plantation and factory of Matsushita En, which is active in organic farming and exporting green tea to France and other countries. 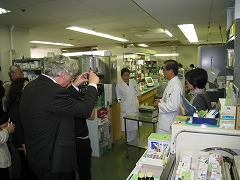 The participants also visited the University of Shizuoka to cover the research and development of “next generation” bottled tea drinks and tea extracts, including the research on decreasing bitterness of catechins. At the Kakegawa City General Hospital, they had a briefing on “long life at moderate cost” in the city, known for its extensive green tea production and consumption. The journalists also visited Bio Farm Matsuki in Shibakawa-cho at the foot of Mt. Fuji, where they are working on a new business model of organic farming in a mountainous area.

In the meetings with Shizuoka Governor Heita Kawakatsu and Kakegawa Mayor Saburo Matsui, the journalists asked about the attractions of Shizuoka, the aging agricultural population, and the issue of abandoned farmland.