Eight journalists from China, Taiwan, Bangladesh, Spain, Lebanon and the UAE joined our press tour to the San-in Region to cover Shimane and Tottori prefectures on a sunny pleasant day of autumn. Day one of the tour, in Shimane prefecture, focused on Izumo-taisha’s renovation called “Heisei-no-daisengu” which coincides with the 1300th Anniversary of the Compilation of the Kojiki; the inheritance of history and traditional culture attracting public attention once more. Day two of the tour, in Tottori prefecture, covered the regional revitalization strategy that takes advantage of the rich forests and water of the national park Daisen. 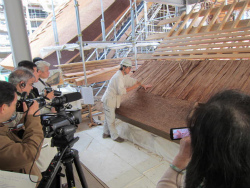 Next year is the 1300th Anniversary of the Compilation of the Kojiki. For this occasion, Shimane prefecture is promoting the “Land of the Gods” project. The prefecture considers that the tourism sector will be most significant industry in terms of providing employment under the circumstances such as decreasing population and the young people are moving away from the prefecture. This project aims to increase the total number of visitors by about five million in 5 years counting from 2010. The correspondents visited the main feature of this project, Izumo-taisha. Rev. Takeshi Nishimura, Senior Priest and General Manager, gave an account of the history of the shrine and the renovation called “Heisei-no-daisengu,” the first in 60 years. Rev. Nishimura says that people have no feeling of reverence these days and might become arrogant. He sees this partly caused by the nuclear plant incidents and urged greater humility. Next, the journalists visited the Honden (main hall), which is temporarily closed off for the thatch to be replaced. In the Honden, Mr. Hiroyuki Nishi, a veteran thatcher who heads the craftsmen from various parts of western Japan, explained about the work. The demonstration by Mr. Nishi, holding a score of bamboo pegs in his mouth and nailing layers of cypress bark to the roof one after another, was astonishing and the journalists kept taking photographs of him.

At lunch time, the journalists visited Shinmon-dori Street which is in front of a shrine. Mr. Mitsunori Tadano and Mr. Minoru Watanabe, Shinmon-dori Yomigaeri-no-kai (Association to Revive Shinmon-dori), told of their efforts to restore the lively shopping street by organizing various events. 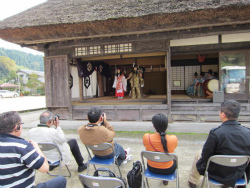 Then the journalists visited Unnan City to cover Children’s Kagura which is widely performed in Shimane prefecture. They enjoyed the performance based on the myth of Yamata-no-rochi (a legendary dragon with eight heads and eight tails). It was performed by 13 students from the Kagura club of Unnan Municipal junior high school at the “Kagura-no-yado,” a reconstructed historical residence. After the performance, the journalist from China mentioned about young generation in China tends to show more interest in Rock or Jazz rather than classical Chinese opera. He interviewed students, asking about the background of why they wanted to learn Kagura. 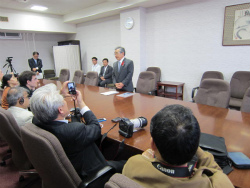 At the end of the day in Shimane, the journalists interviewed Shimane Governor Mr. Zenbee Mizoguchi. Governor Mizoguchi first pointed out that Shimane is absolutely not famous, and people do not know where it is. However, he told of a plan for making Shimane richer by tourism using the three main characteristics of Shimane; rich natural environment, traditional culture and good local community. The Q&A session dealt with topics such as the number of annual foreign visitors, Shimane’s main industry and tourism promotion overseas. 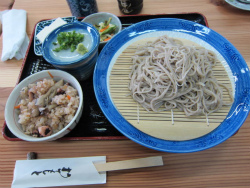 Tottori Prefecture is preparing to host an international convention on eco-tourism in 2013. Indeed, the main venue for this convention is at Daisen and its surrounding western Tottori area, the same as this press tour covered. The journalists first visited the Fukuoka district of Houki Town at the foot of Mt. Daisen. It is an under-populated village, with a population of only 180 and an aging population rate of 45%. In this small village, the revitalization project is carried out by using the rich water of Mt. Daisen for doburoku (unrefined sake) production and “Kachan-soba (Mom’s Buckwheat Noodles).” Now, the doburoku brewery and farm-run restaurant, in a renovated branch school, is attracting attention and has regular customers even from outside the prefecture. President Keisei Sumida of Kamidai company Ltd, owner of the restaurant, explained about the business and told us that most difficult thing is to raise a successor. President Sumida wanted to bring up young successors to take over, who love this area as they do their life. The journalists asked various questions including the earnings and structure of the company, its main market and a subsidy from the local government. 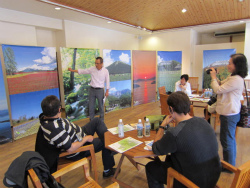 Although it is in a different administrative district, NPO Daisen Nakaumi Tourist Organization (Daisen Kingdom) promotes the nature, history and culture of both the eastern part of Shimane and the western part of Tottori, which share the same cultural sphere. Mr. Takao Ishimura, President of the organization, explained about Mt. Daisen with its related beech forest and water business, well preserved natural environment and religion. He said “Finally, the most depopulated area in Japan has been remembered.” He announced the “Power of Mt. Daisen water project,” to make people energetic using Mt. Daisen’s water. 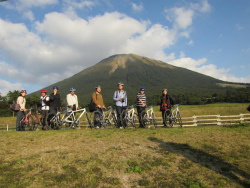 At the end of this tour, the journalists joined the eco tour, to get the feel of Mt. Daisen’s nature. They trekked from Daisen-ji temple to Enryu-in temple passing a clear stream and beech forest. In the beech forest, the guide explained about the fertile soil and rich water due to the many layers of fallen beech leaves. The Enryu-in has become a new tourist attraction, famous for its ceiling covered with Manga drawings done by the local Manga artist, Mr. Shigeru Mizuki, who is from Sakaiminato City. Then the journalists enjoyed the mountainside scenery by riding bicycles halfway down Mt. Daisen. The journalist from Taiwan pointed out that this kind of eco tour is yet unfamiliar to Taiwanese tourists who have visited Japan a couple of times; it could possibly appeal to them as a new attraction.