A total of six journalists participated in this tour, from China, France, Germany, Hong Kong, and the UK.

This press tour covered the following three topics:
I. Takachiho: Yokagura in the Home of Myths, with One of Japan’s Most Beautiful Gorges
II. Community Businesses Creating Local Economic Cycles with a Global Perspective
III. Holy Site from Myth Where the “Sazare-ishi” Mentioned in the National Anthem Remain

(*For more information on tour stops, click here for the tour notice.)

I. Takachiho: Yokagura in the Home of Myths, with One of Japan’s Most Beautiful Gorges」

The press tour visited Takachiho Gorge, and walked while viewing the impressive scenery of waterfalls along the river flowing through the valley. Mr. Ryusuke Iihoshi of the Takachiho Tourist Association explained that 1.5 million people visited the gorge each year, a 50% increase compared to ten years ago, and that the number of visitors was also increasing. 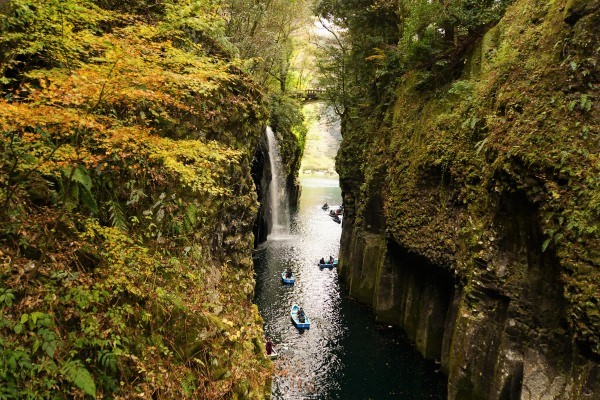 Many of Japan’s origins myths written about in the Kojiki, Japan’s oldest historical book, are set in Takachiho. One of these myths is about the cave, Amano-Iwato, where the sun goddess Amaterasu is said to have hidden after she got angry at her younger brother’s actions. Since her hiding in the cave meant light left the world, causing illness to spread and crops to fail, the other gods worked together to think up a plan to draw Amaterasu out of the cave.

The journalists visited the Amano-Iwato Shrine, which worships the cave where Amaterasu is said to have hidden, followed by visiting Amanoyasugawara, another cave nearby where the gods are said to have held their discussion. Mr. Eishu Sato, head priest of Amano-Iwato Shrine, explained, “It is a fact that in the distant past, Mt. Aso erupted, and one explanation for this myth is that the smoke from the eruption blocked out the sun, darkening the sky and leading to food not growing and illness spreading.” The journalists were very interested in this explanation. 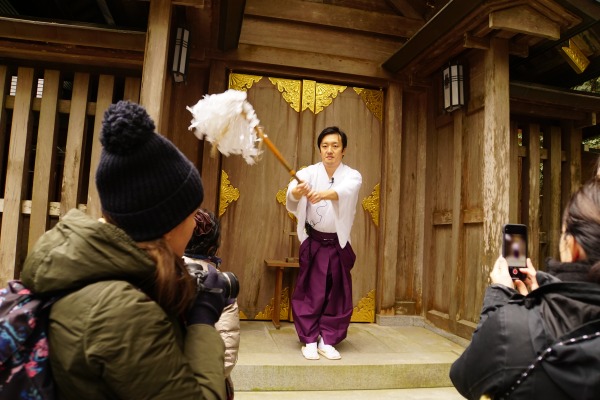 The yokagura of Takachiho is a religious ritual in which people dance all night long to show gratitude for the fall harvest and pray for a bountiful harvest the next year. Yokagura has continued for around 800 years, and is designated as an Important Tangible Folk Cultural Property by the Japanese government. Even now, 18 villages in Takachiho carry on the tradition after harvest, from November to February.

The press tour group spoke with the members of the Gokamura Village Development Group, who carry on this tradition in the Iwato area. The journalists were very interested in how kagura was being passed on to the next generation, and asked if they were any younger dancers to take over for the current members. In response, Ms. Fumiaki Takafuji commented, “Although the number of dancers was declining in the past, recently locals have been going to everywhere from preschools to high school to teach kagura, helping maintain the number of dancers. There are young people who return home during kagura season even if they have moved to Tokyo for school, or people who moved to Takachiho for work learning kagura and coming back to dance after their job here is over,” and Mr. Hiroaki Kudo stated, “The population of the town has halved from what it used to be 40 years ago, but the number of kagura dancers has increased to more than 450.” The journalists listened to these explanations of how efforts to pass on traditions to the future were becoming successful.

After the interview, the journalists saw a yokagura based on the Amano-Iwato myth. They took many pictures of the dancers in their masks, dancing fluidly as they represented the gods. 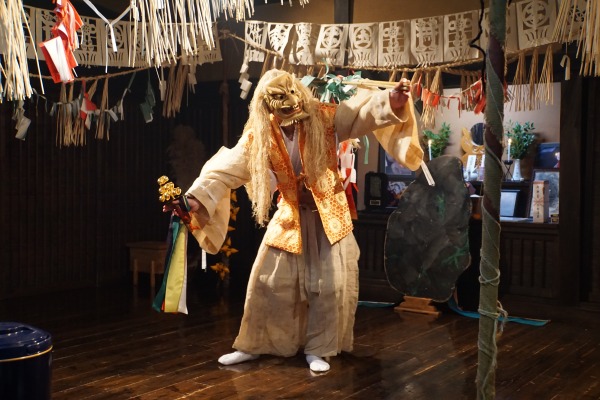 The journalists met with Mr. Hiroaki Kudo, the only specialist in making the masks used in kagura in the region. Taking over from his father-in-law to become the third-generation owner of the business, Mr. Kudo has been making masks for over 30 years, in addition to being a kagura dancer himself.

Responding to a question from the journalists, Mr. Kudo said, “In fact, the masks used for kagura can be used for a long time without breaking so there is very little demand for them, and they account for less than 10% of the masks I make. Most of the masks I make are for souvenirs or gifts.” Speaking about his successor, he explained, “Since making a living is difficult without high demand, I never told my son he should follow in my footsteps. However, he still decided to do so. Since there is not enough work for two people, he looks for more on his own. Instead of just waiting, he is at an exhibition in Nagoya right now in order to create new business opportunities.” 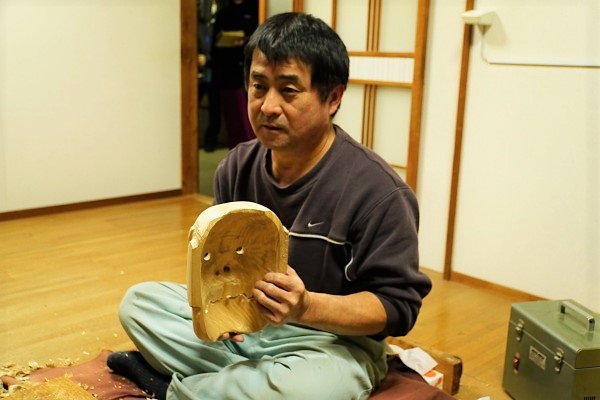 Through the tour, the journalists deepened their understanding of local culture in Takachiho, learning about the yokagura which has continued for 800 years by speaking with the dancers passing on its techniques and an artisan who makes the masks, and visiting the locations where one of the myths used in yokagura performances was set.

The tour visited Miyazaki Sabo in Gokase, located by Takachiho. Taking advantage of the cool temperatures and lack of bugs due to the altitude of the region, the company grows tea without any pesticides or fertilizers, and also makes kamairicha (pan-fried tea leaves), which is very uncommon in Japan. The fourth-generation president of Miyazaki Sabo, Mr. Akira Miyazaki, explained that compared to the steamed tea that is popular in Japan, kamairicha, which is made in a hot pan, has a different, unique aroma.

A unique characteristic of the company is that one third of its 15 employees have moved to the village from other areas. The ample nature of the area, the warmth of the locals, and the work of making tea has attracted numerous people, with one of the workers marrying a coworker after they move to Gokase to work at the company, with the couple planning to raise their children in the area. In response to a question about exporting their product overseas, Mr. Miyazaki replied, “Currently, only about 4–5% of our sales are overseas, but we export to countries including Belgium, Canada, Czechoslovakia, Germany, Taiwan, and the US.” The journalists showed significant interest in filming and photographing the plant and a demonstration of making kamairicha. 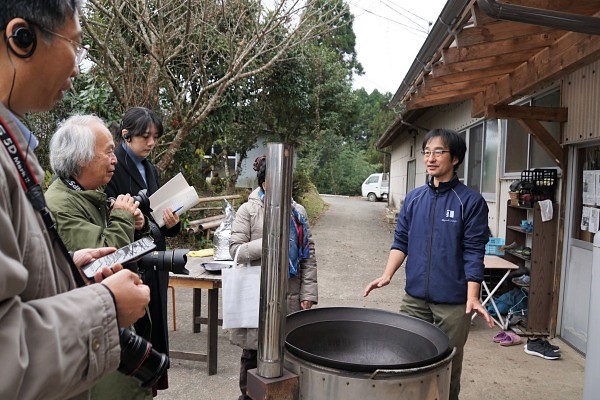 Next, the tour visited Takachiho Muratabi in Takachiho’s Akimoto district, a business which makes amazake (sweet, low/non-alcohol fermented rice drink) and liquor as well as running a hostel. Of the approximately 100 residents in the Akimoto district, over 80% are at least 60 years old. Ms. Fumi Koike, public relations staff for the company, explained that the founder used to work at the town office, and started the company in 2010 based on a desire to create employment and business in the local area by using its local specialties.

The company started with only three staff, but the founder’s daughter and her husband, who were in their 20s at the time, developed a non-alcohol amazake with lactic acid bacteria which sold well, and the company has now grown to have 14 employees. Most of these employees are in their 30s, creating a workplace for the younger generation in this are with an aged population. The journalists asked about Takachiho Muratabi expanding its business overseas, and were told, “After promoting amazake at overseas trade fairs, we are now exporting to China and England.” 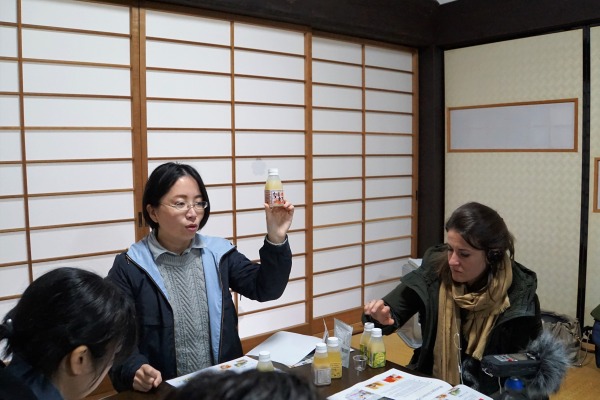 The tour visited Miyazaki Hideji Beer (located in Nobeoka), which produces more than any other craft beer company in Kyushu. Using ingredients and even brewing tanks which were made locally, the company’s goal is “local cooperation.” The company convinced local farmers to grow the first hops and barley for malts in Miyazaki, bringing innovation to the region. Their beer made using chestnuts grown in Miyazaki won the highest award at the 2017 World Beer Awards in the UK, and is exported to the US.

According to the company’s president, Mr. Tokihiko Nagano, currently both domestic and international demand is so high production cannot keep up, and so they are planning to expand their brewery. When a journalist asked whether it was difficult to find employees due to the declining population in the area, Mr. Nagano replied, “We do not plan to become a huge company. Our goal is to promote our beer not to Tokyo, but to the world, and stimulate this region by making beer. People who find this idea attractive join us, and we are hiring workers steadily. The number of employees has grown from 6 at the beginning to 16 now, with many of them being in their 30s and either locals returning to the area or people relocating here.” 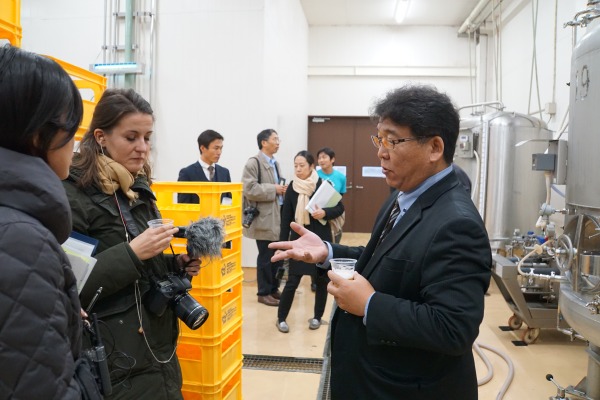 The journalists showed interest in these business initiatives to take advantage of local specialties despite the declining population, decreased birthrate, and aging population, hiring young workers and people from other areas.

III. Holy Site from Myth Where the “Sazare-ishi” Mentioned in the National Anthem Remain

The tour visited Oomi Shrine (located in Hyuga) to finish the tour. This shrine facing the Pacific Ocean, where beautiful sunrises can be seen, has 40,000 visitors in the first three days of the new year alone.

The shrine grounds contain Japan’s largest collection of sazare-ishi. Sazare-ishi are small rocks which collected at river mouths in the distant past, and over thousands of years mixed together with clay and sand to form into boulders. The Japanese national anthem “Kimigayo” also mentions sazare-ishi becoming boulders. The journalists listened carefully to the explanation by the head priest, Mr. Mitsuaki Niina, and filmed and photographed the large sazare-ishi boulders. 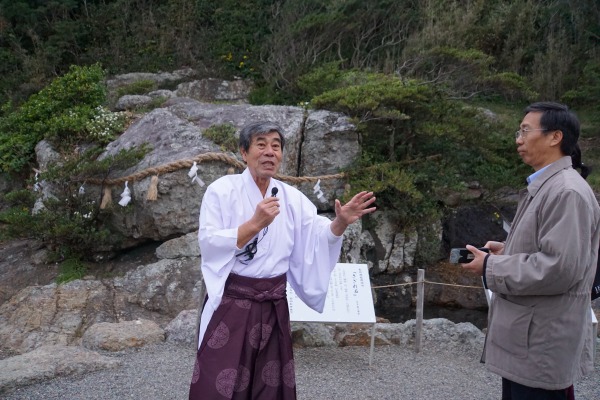