On November 29, 2019, the FPCJ held a press tour to Kikkoman, Japan’s most famous soy sauce manufacturer, with a domestic market share of around 30% and products sold in over 100 countries around the world.

Six journalists joined this tour, from media organizations based out of China, Denmark, Spain, the UK, and the US.

*This press tour was sponsored by Kikkoman, with cooperation by Foreign Press Center Japan.
*Click here for the announcement of the tour.

At the company’s Noda Head Office in Noda, Chiba, where Kikkoman was founded, the tour found out about Kikkoman’s initiatives to maintain traditions while meeting society’s diverse needs and promoting international exchange of food culture, as well as the development of products for healthy eating and the company’s global expansion, from Mr. Haruhiko Fukasawa of the Foreign administration department.

Afterwards, the tour heard from Mr. Hiroyuki Akamatsu of the Soy Sauce Development Section of the Product Development Headquarters about the various products sold by Kikkoman, and had the chance to taste five kinds of soy sauce (standard Kikkoman, fresh raw, Goyogura, less salt, and soybean peptide less salt). The journalists asked questions about the alcohol content of soy sauce and about the company’s traditional koji (mold used to make soy sauce). 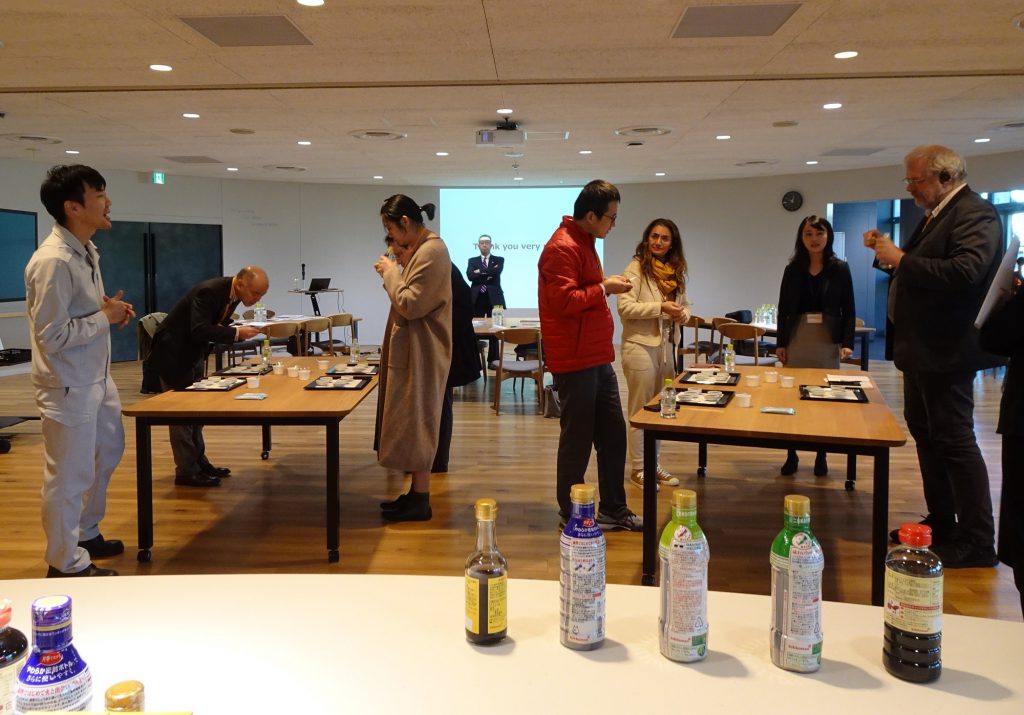 The tour also visited the Goyogura (Imperial Soy Sauce Brewery) located in Noda, where Goyogura soy sauce is made using traditional methods passed down through the years, and heard explanations of these traditional methods along with displays of traditional tools. The journalists asked questions about the wooden vats used to make the soy sauce, and about how much Goyogura soy sauce was made and consumed in a year. There was also an opportunity to film and photograph through a glass window the soy sauce being aged in wooden vats. 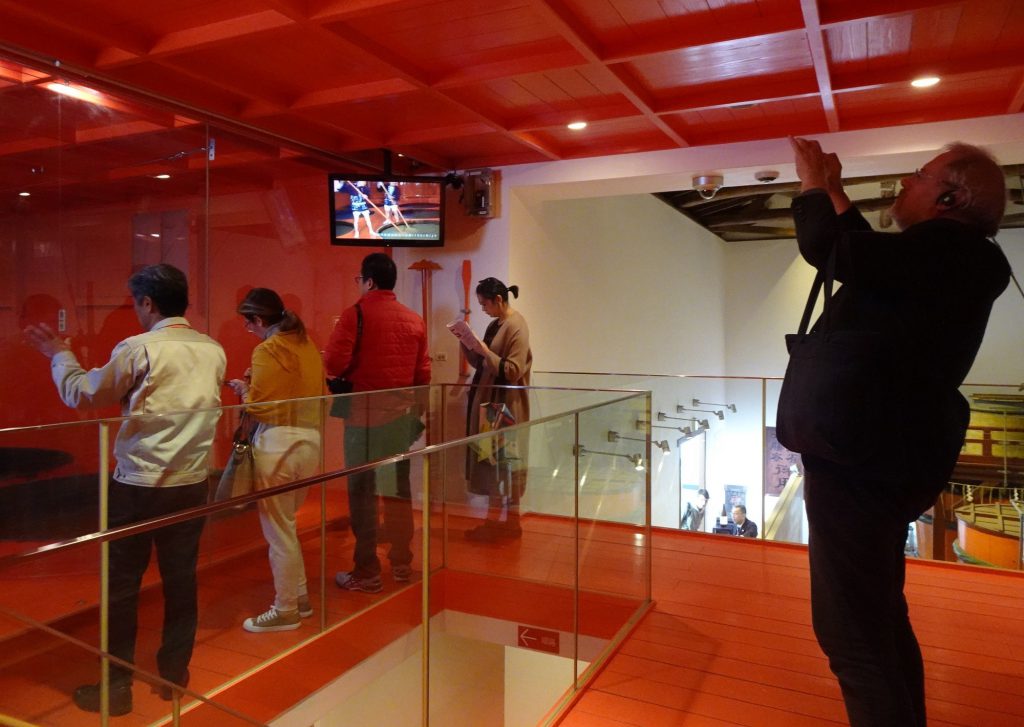 At Kikkoman General Hospital, the tour heard from Dr. Yoshiro Kubota, director of the hospital, about the establishment of this hospital that has helped support healthcare in the region, and about efforts to make the most delicious hospital food in Japan. The journalists asked questions including what the average number of days spent hospitalized was, how much the hospitalization costs individuals had to cover were, the number of beds and their occupancy rate, and the number of patients at the hospital over the course of a year. From Ms. Asami Kudo, a registered dietitian at the hospital, they heard about efforts to provide meals that look and taste good while also ensuring they have an appropriate amount of salt and calories, with attention being paid to how the meals are prepared and served. The journalists asked to what degree Kikkoman products were used in the meals provided at the hospital, and whether they provided a meal delivery service for patients after they were released from hospital. 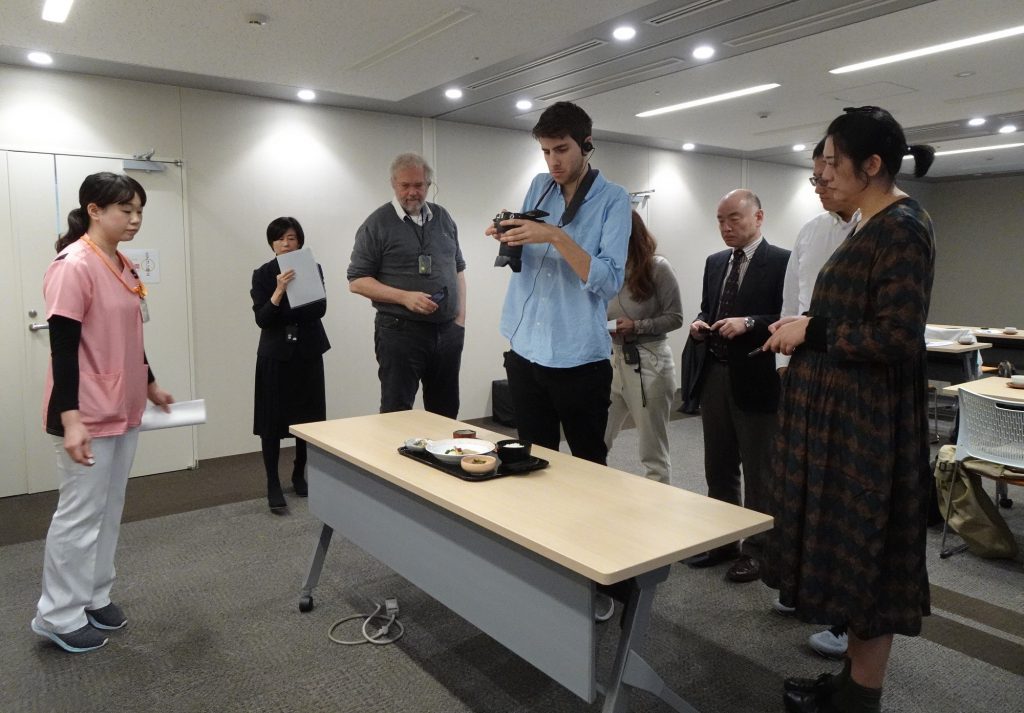 Afterwards, the journalists interviewed four patients, asking them why they chose this hospital and what they thought of the meals, with some of them filming or photographing the interviews. There was also an explanation of how based on the patient’s chewing strength and physical condition, in addition to changing the toughness of the main dish efforts were made to change the side dishes and flavoring as well, with cooking methods used to make food easier to eat. 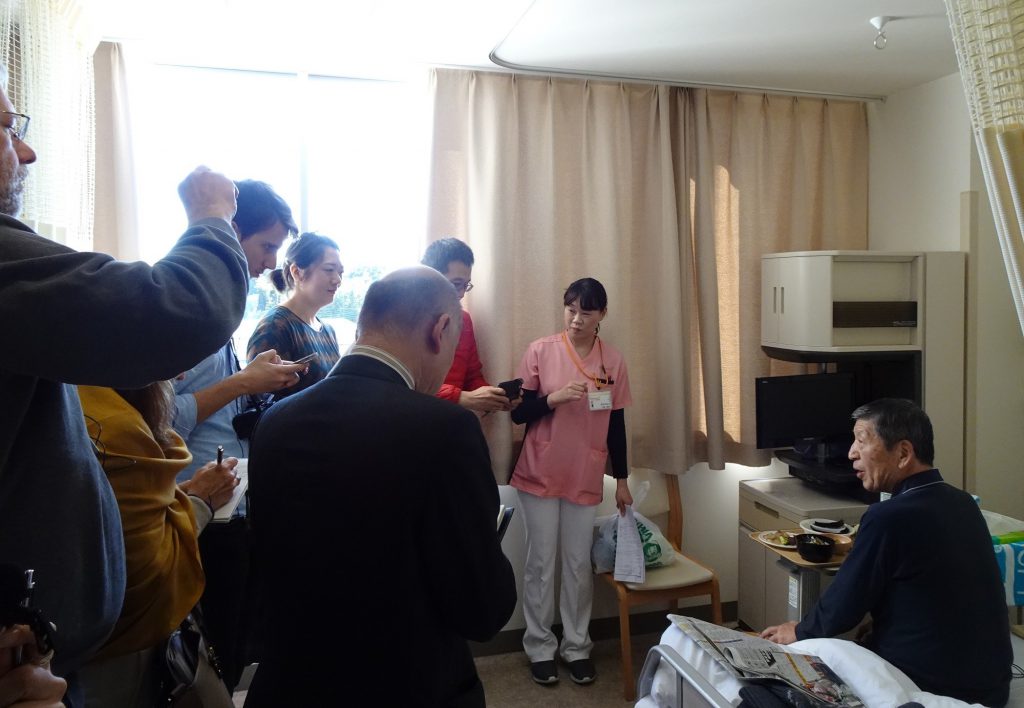 The tour ended with an interview with President and CEO Noriaki Horikiri at the Kikkoman Tokyo Head Office. He spoke about introducing Japanese food culture to the world through soy sauce, as well as efforts to create new food culture through fusion with different food cultures around the world. He also spoke about his desire to contribute to solving social issues such as environmental problems.

The journalists asked why the US was chosen as Kikkoman’s first international market despite soy sauce not being common there like it was in China, whether efforts were made to introduce “proper” ways to use soy sauce when entering overseas markets, whether the company planned to join the bio-industry, what efforts were being made to deal with environmental issues, and what the significance was behind continuing to run the hospital as a non-profit business. 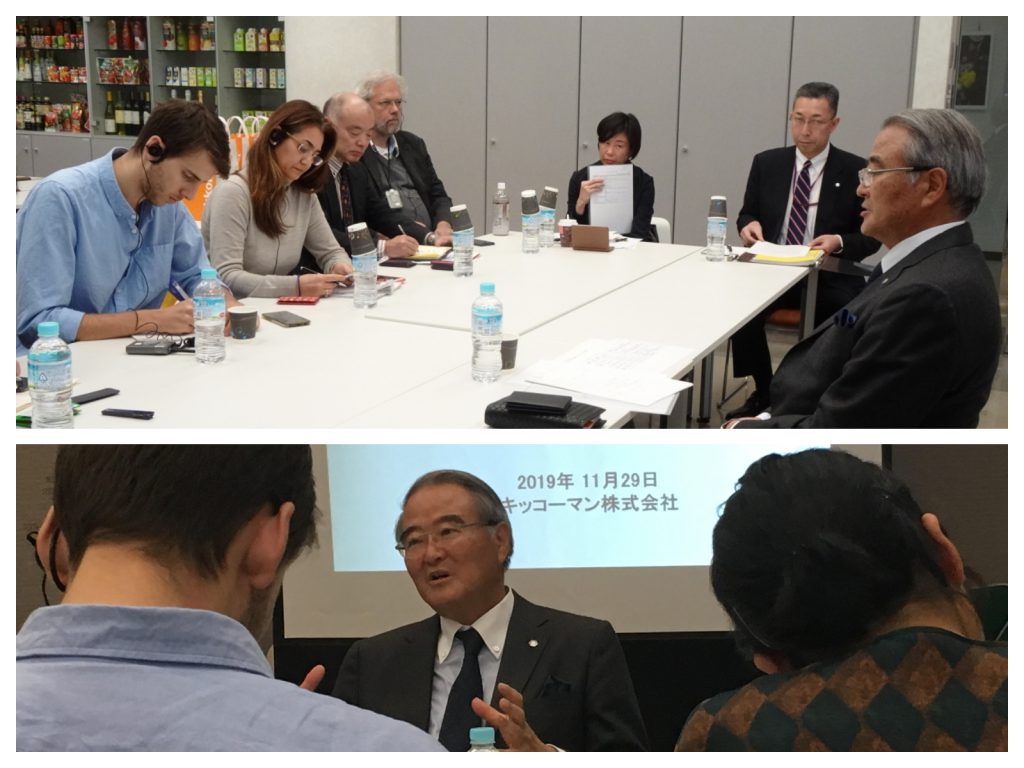 Some of the reporting done by participants on the tour is listed below.