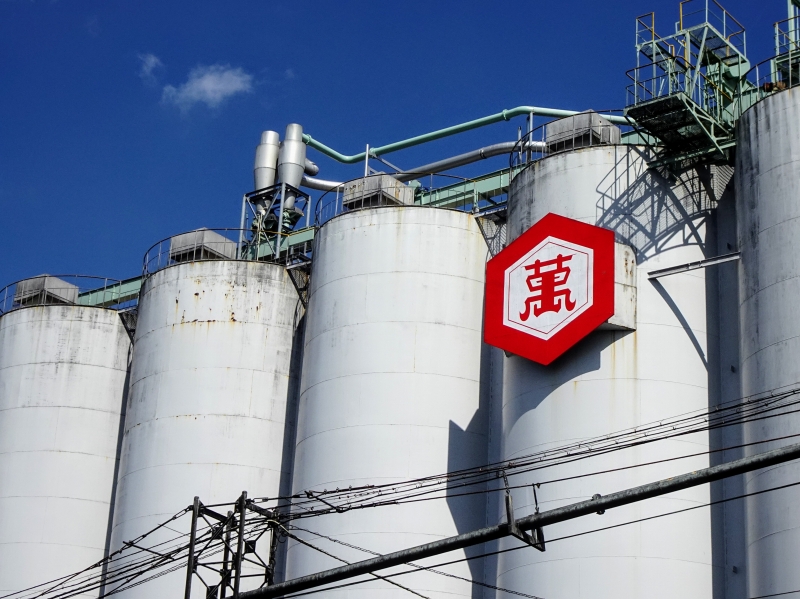 Soy sauce is a vital part of the Japanese diet. With the increasing popularity of Japanese food worldwide, soy sauce has also become more common in grocery stores around the world. With the Westernization of the Japanese diet after World War II, and in recent years the increase in nuclear families, simplification of cooking, tendency to eat out, and increased availability of premade foods, people’s relationship with food has changed over the years and the consumption of soy sauce itself in Japan has been gradually decreasing. In 2018, the annual consumption per person dropped to six liters, down from around ten liters 30 years earlier. On the other hand, sauces made using soy sauce as a base have been growing more popular, with their quantity steadily increasing. Export volume and sales have been increasing, to 35.5 million liters/7.726 billion yen in 2018, both around double their 2010 levels.

Japan is said to have over 1,300 soy sauce manufacturers, yet Kikkoman has around 30% of the domestic market share, and sells its products in over 100 countries around the world, making it Japan’s most famous soy sauce manufacturer. Of their 45.35 billion yen in sales for 2019, overseas sales account for 60%. In 1973, they were the first Japanese company to build a soy sauce plant overseas, in the US, and now have seven plants operating in China, the Netherlands, Singapore, and Taiwan.

In those seven overseas plants, while developing techniques to ensure they could make soy sauce of the same quality in those environments different from Japan, Kikkoman has worked on responding to different diets and tastes worldwide. To provide options for allergies or religious prescriptions, the company has made gluten-free soy sauce using rice instead of flour (not sold in Japan) and “green pea soy sauce” using no soybeans or flour, and at the G20 Osaka Summit in June, its halal soy sauce was used. In response to increased health consciousness, their reduced-salt soy sauce and soy sauce which helps lower blood pressure are also popular. Along with these innovative efforts, the Goyogura (Imperial Soy Sauce Brewery) in Noda, Chiba, where the company was founded brews soy sauce for the Imperial Household, making soy sauce using methods that leave the temperature and humidity during fermentation and aging up to nature.

Kikkoman’s contribution to society through food and health can also be seen at the Kikkoman General Hospital located in Noda. Of the 30 hospitals in Japan operated by corporations, this is the only one run by a food manufacturer, and with the goal of providing “the tastiest hospital food in Japan,” they use different cooking methods and menu combinations to provide patients with satisfying meals while keeping salt content low.

◎This press tour will cover initiatives by Kikkoman, a company protecting tradition while responding to changing times and various societal needs, and see their approach to food and health through their product development and management of a hospital.

◎In Noda, the tour will learn about the soy sauce production process and the various kinds Kikkoman makes, including reduced salt soy sauce, soy sauce without using soybeans, and the Goyogura soy sauce made for the Imperial Household using traditional methods.

◎At the Kikkoman General Hospital, the tour will learn about efforts to make the tastiest hospital food in Japan, as well as seeing meals and interviewing patients there.

◎At the Tokyo head office, President and CEO Noriaki Horikiri will speak about topics such as Kikkoman’s future overseas strategy.

◎After the tour, participants who are interested will have the opportunity to go to a dinner at Kikkoman Live Kitchen Tokyo. Having opened over a year ago, this facility provides demonstrations of cooking using ingredients from around Japan and Kikkoman seasonings, with different full-course meals daily using recipes made by two chefs, from Japan and overseas. This restaurant allows visitors to experience one of Kikkoman’s management principles, promoting the international exchange of food culture. 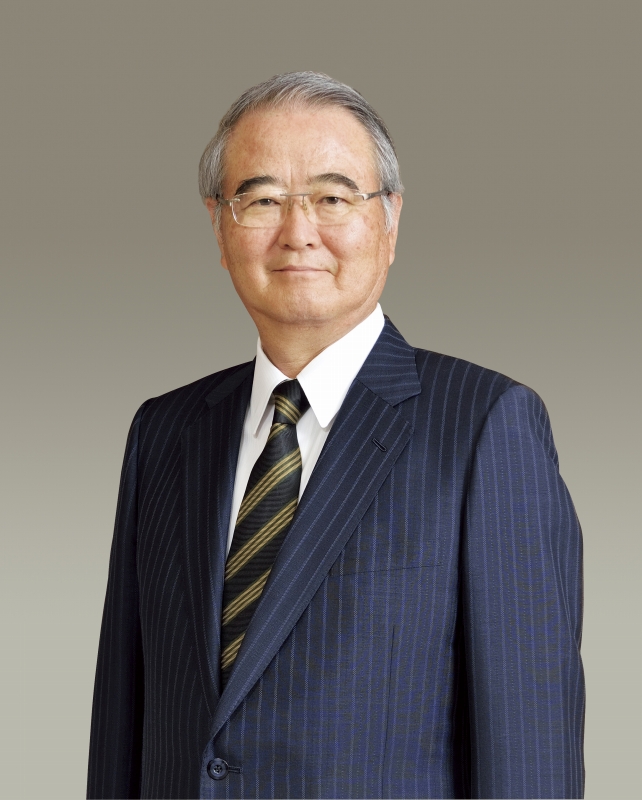 The forerunner to Kikkoman was Noda Shoyu Co., Ltd., founded in 1917 in what is Noda City today, located at the northwestern edge of Chiba along Saitama. Noda Shoyu was a merger of eight family companies (six Mogi families, Horikiri, and Takanashi) who had been making soy sauce since the mid-1600s in Noda and Nagareyama. Since Noda had Edogawa River to the west and Tonegawa River to the east, it could take advantage of water transportation for bringing in soy sauce ingredients and shipping the final product to Edo, making it into a major soy sauce producing region.

Although Kikkoman is now used around the world, the company first seriously began expanding overseas when it established a sales company in the US in 1957. Since that time, the company has worked not to promote “soy sauce as a seasoning used in Japanese food,” but to fuse soy sauce with the local food culture. In the US, through demonstrations at supermarkets the company promoted how soy sauce worked well with meat dishes, and made various recipes using local ingredients and soy sauce, expanding the uses of soy sauce, and now half the households in the US are said to keep soy sauce on hand at all times. On the websites Kikkoman maintains for different countries, there are recipes using soy sauce in combination with the local food culture.

With Kikkoman having expanded to markets in the US, Europe and the rest of Asia, they now plan to expand to South America and Africa, respecting global food diversity while working to make soy sauce a global standard for seasoning.

Mr. Horikiri will explain about the wonders of soy sauce that make it possible to fuse with food cultures from around the world.

Goyogura soy sauce, being made for the Imperial Household for 110 years 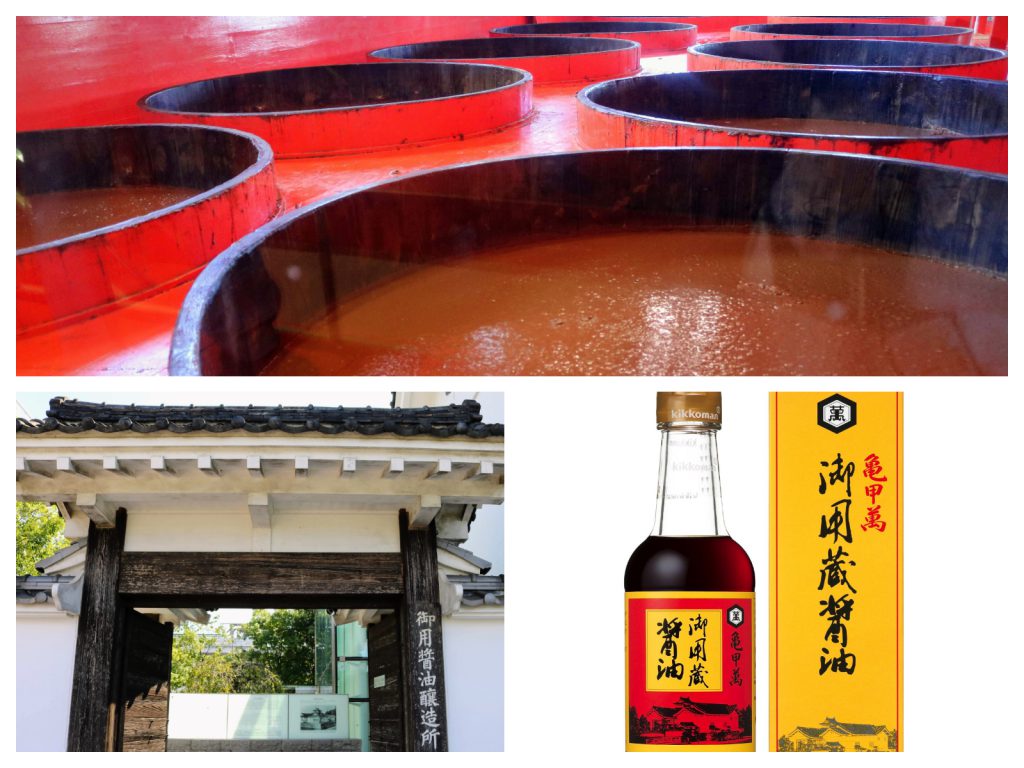 There are six companies around Japan which provide the Imperial Household with soy sauce, with Kikkoman having joined that number in 1908. On the Noda Factory grounds is the relocated Goyogura, a building original constructed along the Edogawa River in 1939 to make this exclusive soy sauce, and inside traditional soy sauce manufacturing methods and tools are displayed.

Soy sauce is made by combining steamed soybeans with roasted and crushed wheat, before adding koji (a type of mold) to make shoyu koji. The moromi made by adding salted water to this mixture is then fermented and aged, before being pressed, then heated to eliminate germs and adjust the flavor of the sauce. In modern times, the koji mold, temperature, and humidity are managed by machines, as well as processes such as pressing, but although machines and automation are growing more common, the ingredients and processes used remain essentially the same.

In the Goyogura’s preparation room, domestically-produced wheat, soybeans, and salt are used as ingredients with moromi fermented and aged in traditional cedar vats. The normal soy sauce available on the market today is prepared in climate-controlled conditions, and is made in about six months. However, at the Goyogura the moromi is aged for a year in a natural climate. The Goyogura soy sauce produced like this, with its dark color and rich aroma, continues to maintain traditional production methods as the era changes from Heisei to Reiwa.

The tour will visit the Goyogura in the Noda Factory grounds, and, through glass, be able to film and photograph the moromi being aged in wooden vats. 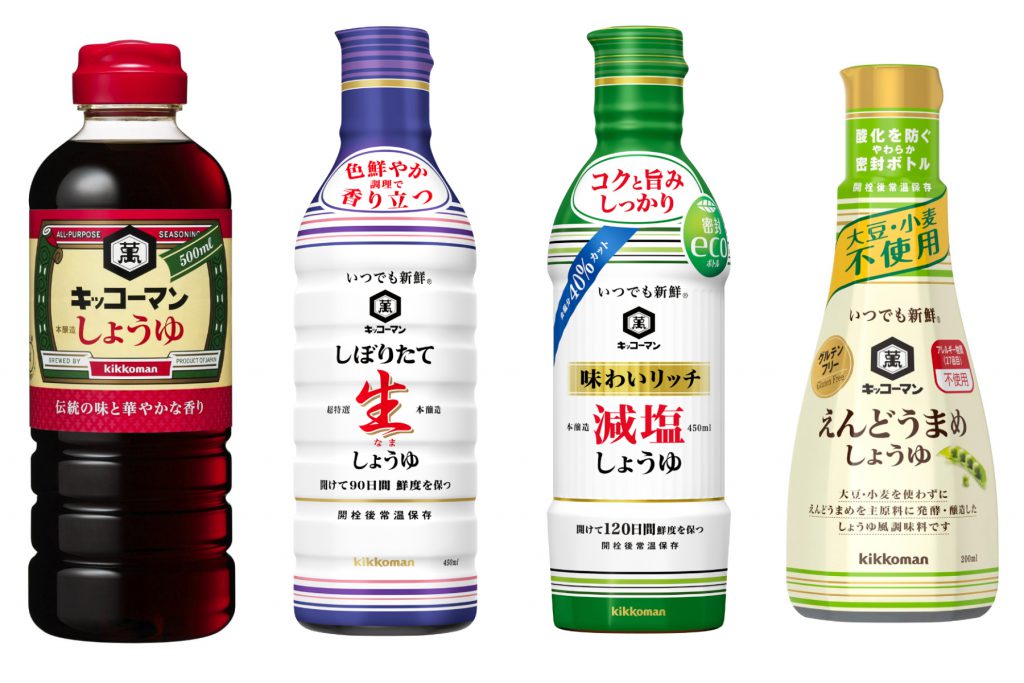 With increased health consciousness, reduced-salt soy sauce has become a common sight, but Kikkoman has actually been researching and developing soy sauce with reduced salt for hospital food for over 50 years. Now, they have products with 25%, 40% and 50% less salt (compared to standard Kikkoman soy sauce) as well, expanding the choices available to consumers. In 2013, they began sales of a soybean peptide soy sauce developed over 10 years, which can lower blood pressure. Although soy sauce tends to draw attention for the effects of its salt content on health, Kikkoman made a product that could instead help improve health when used in reasonable amounts.

Kikkoman has also made gluten-free soy sauce, “green pea soy sauce” which does not use any flour or soybeans, and halal soy sauce certified by a halal inspection authority, allowing people who could not use soy sauce due to allergies or religious reasons to be able to experience a greater diversity of food. While expanding sales channels both within Japan and overseas, by listening to a variety of different voices Kikkoman have created soy sauce to meet these diverse needs, and will continue to do so in the future.

3. The Kikkoman General Hospital, Aiming to Make the “Tastiest Hospital Food in Japan” 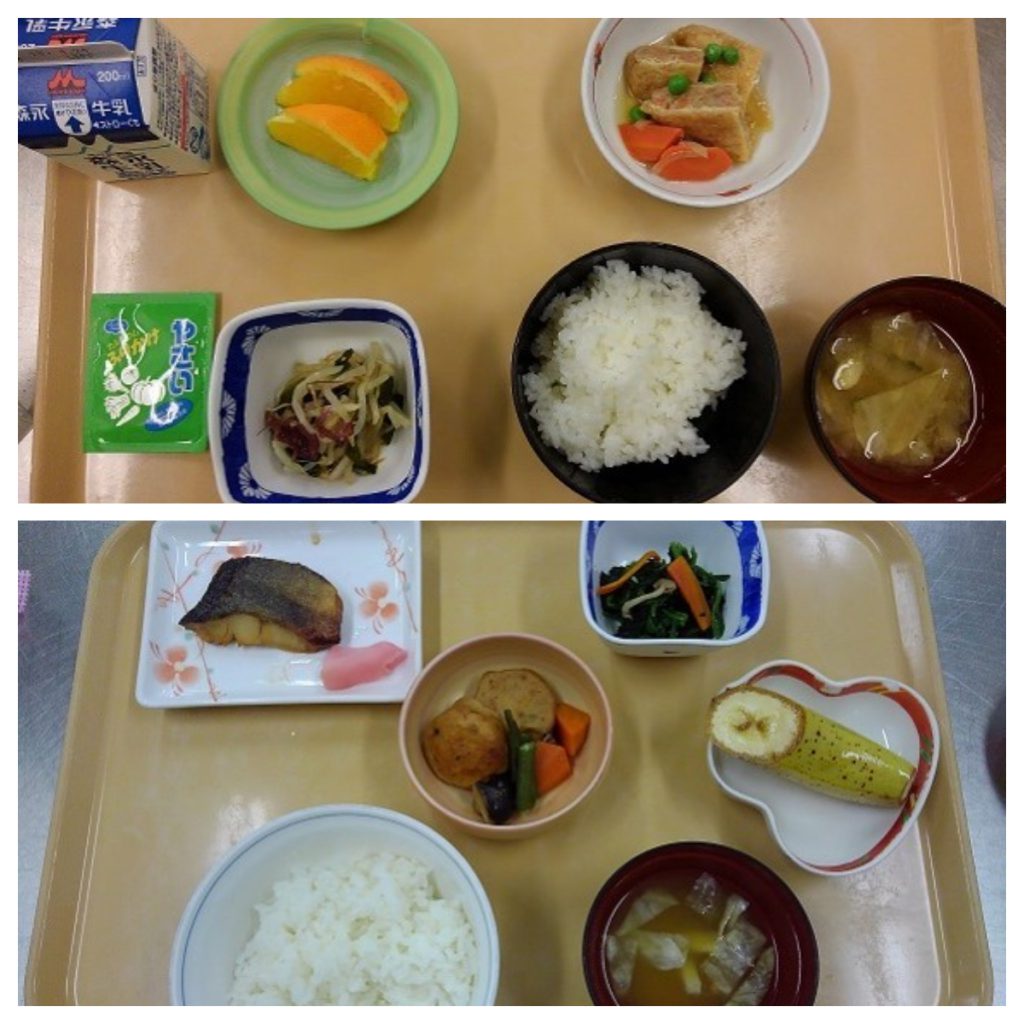 As a hospital operated by a food manufacturer, special care is taken with the food the hospital provides. The hospital creates its meals based around the Ministry of Health, Labour and Welfare’s guidelines for daily salt intake (under 8 grams). With studies showing the average daily salt intake in Japan is 9.9 grams (as of FY 2017), the challenge is how to make an appealing meal while keeping salt low. Some of the methods the hospital uses are making one of the dishes in a meal have a stronger flavor than the rest, to reduce how flavorless the meal might seem, or thickening a reduced-salt recipe so that it can be tasted for longer. The hospital also uses broth made from seaweed, fish, or chicken which has plenty of umami, combined with ingredients full of umami such as meat, seafood, vegetables, and mushrooms, in order to achieve an umami synergy. Since Japanese people’s opinion on whether a meal is good or not overall is affected by the rice, careful testing was done to ensure the rice could be cooked just right to serve delicious rice.

Generally, hospital food is perceived as being bland and tasteless, but due to the Kikkoman General Hospital’s efforts, in a survey of patients at the hospital over half gave the meals the highest possible rating overall, with around 70% responding that the flavoring was “just right.”

The tour will visit Kikkoman General Hospital, where Dr. Yoshiro Kubota, director of the hospital, will explain the history of the hospital and its initiatives combining health and food as the only hospital in Japan to be operated by a food manufacturer, as well as efforts by its registered dietitians to make the tastiest hospital food in Japan.

The tour will also have a chance to taste the hospital food themselves for lunch.

*Information on payment and cancellation fee will be provided to participants.

（1）This tour is organized by Kikkoman Corporation and planned and operated by the FPCJ.

（2）The schedule is subject to change without notice.

（3）This tour will require participants to bear part of the cost, but is not a profit-making venture.

（4）Neither the organizer nor FPCJ will be liable for any inconvenience, trouble or accidents that might occur during the tour.

（5）There may be some restrictions on photographing and filming at the tour sites. Please follow the instructions of the staff in charge.