The FPCJ held a press tour to Toyama City, which last year was selected by the Cabinet Office of Japan as a SDGs Future City, cities carrying out initiatives to fulfill the SDGs. The tour covered initiatives to support raising children, efforts to create a cyclical city through promoting food waste recycling and other measures, cooperation with local businesses to use renewable energy and electric vehicles, and other unique and diverse businesses in Toyama City. A total of six journalists joined this tour, from China, Macau, Singapore, and the US.

*This press tour was sponsored by Toyama City and Toyama Television Broadcasting, with planning cooperation by the FPCJ.

*For details on the tour stops, click here for the tour notice.

The tour visited the company housing of Hokuriku Electric Power Company, and learned about the proof of concept test of its energy management system. The system uses electric vehicles, storage batteries, and solar power, and tracks the electricity usage of households while remotely controlling the different devices to ensure the most efficient energy usage possible. The journalists filmed and photographed a demonstration of using an electric vehicle as a power source, which could be used in power outages during disasters. They also interviewed people living in the company housing, asking numerous questions about the car sharing service using the electric cars, such as how convenient it was. 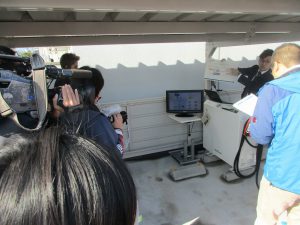 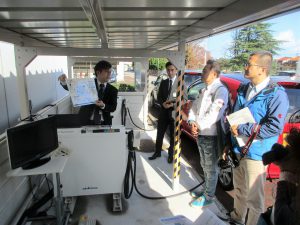 The tour visited Takeoka Jidosha Kogei, and learned about their electric minicars providing transportation to the elderly and people with disabilities. After hearing about the different vehicles available, the journalists saw the factory where they are made, and learned about the production process and capabilities of the cars. In an interview with company founder and president Mr. Eiichi Takeoka (93 years old), the journalists asked about the unique features of the minicars and his passion for making cars. Later on, the journalists raised their voices in appreciation as they filmed and photographed executive director Mr. Manabu Takeoka driving one of the minicars along the road. 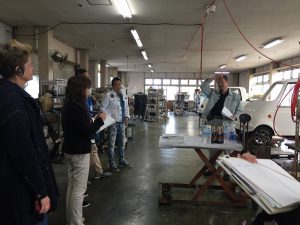 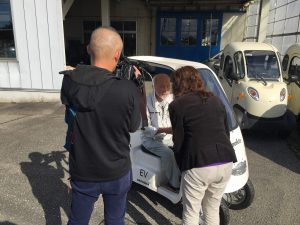 In 2012, Toyama University of International Studies High School was the first school in the prefecture to become a UNESCO School. The journalists first watched a presentation by the students about how the school’s UNESCO Club started the Hokuriku Toyama Blue Earth Project to reduce plastic waste, and about efforts carried out at the school such as donations of stationery and clothes, as well as fundraising activities. On a tour of the school, the journalists saw a panel listing school’s own goals based on the 17 SDGs, and a vending machine that donates one yen to Médecins Sans Frontières with each purchase. The journalists praised the students for their efforts, and commented, “I hope you continue your efforts and spread them to the rest of the world as well.” 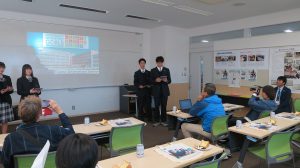 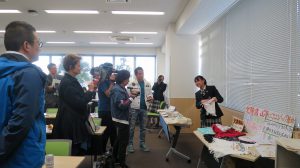 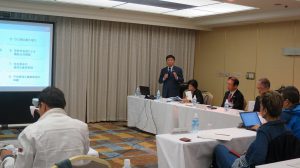 The journalists listened to a presentation by Mr. Mori about the regional issues caused by population decline, a reduced birthrate, and an aging population, and about his compact city policy based around public transportation, before asking him questions such as what the current issues were, what future goals he had, and what the financial state of the city was.

Later, he explained efforts to cultivate egoma (perilla) and make it into a specialty product of Toyama as an initiative in the city’s Environmental Future City framework, as well as introducing international business developments such as joint research with Italy and import deals with Nepal. The journalists made several comments about how memorable Toyama City’s unique policies and active efforts to build the city were.

The tour visited Toyama Eco Town, where various recycling facilities for organic waste, plastic, and more are located in an approximately 18-hectare area which used to be a factory. The journalists covered Toyama Green Food Recycle in particular, which uses food waste to make biogas. After hearing an explanation from the company’s president about what food waste products they recycle and the process of methane fermentation used to make biogas, the journalists toured the plant. The journalists asked questions about what led to the creation of Eco Town, local residents’ reaction to it, the amount of organic waste dealt with at the facility, and the difference in energy produced between methane fermentation and an incineration-type waste-to-energy plant. 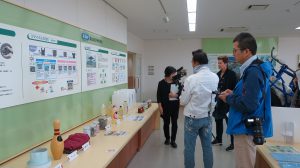 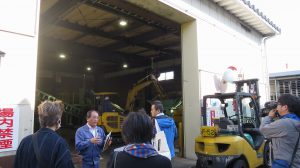 The tour visited the Toyama City Machinaka General Care Center, which opened in 2017 and is one of the only cases in Japan of a childcare support facility operated directly by a local government. First, the tour heard an overview of the Center in the Postnatal Care Support Office, and then heard from a midwife about the mental state of mothers and childcare environment after giving birth, as well as the postnatal care services provided, before seeing the guest rooms. The journalists asked questions about what the requirements were to use one of the rooms,  what they cost, and how frequently they were in use.

Next, the tour went to the Daycare for Sick Children Office, and heard about the service they provide when a child becomes sick and a parent cannot go pick them up due to work or other reasons, in which a city nurse will pick up the sick child in a taxi, and take them to the Center’s daycare. At the Child Development Support Office, the tour heard from a counselor about the support offered to parents concerned about their child’s development. The journalists commented on what a good facility the Center was, and asked questions such as whether building the Center had led to an increased birthrate in the city. 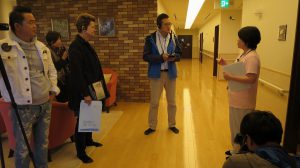 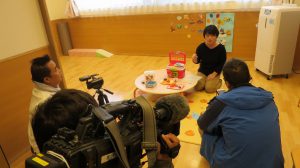 The tour visited Café Gokko, located in the Toyama Healthy Living Center, and heard from owner Ms. Miyoko Hirono about efforts to use every part of ingredients to reduce food loss and about running a food-cycle restaurant. Ms. Hirono uses fresh, organic vegetables grown in Toyama, and created a vegetable scraps dressing using vegetable cores and skins, which are often thrown out. The journalists asked questions about what led to her involvement in these activities and about the cooking classes she teaches to locals. After eating a vegetable lunch with the homemade dressing, the journalists commented that it tasted good, and one mentioned, “I did not realize until now that organic vegetables taste different from standard ones.” 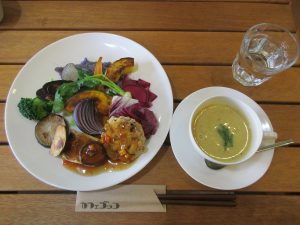 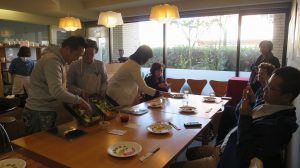 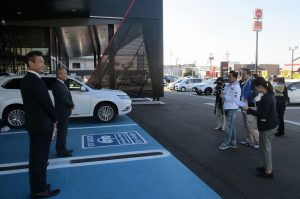 The tour visited Toyama Mitsubishi Motor Sales’ Electric Drive Station and learned about the uses of electric vehicles in the case of disaster. The journalists heard about the solar power systems and V2H (vehicle to home) devices at the Electric Drive Station before heading to the lifestyle corner, set up like a dining room, and seeing a demonstration of a blackout with an energy monitor showing the power in use while it happened.

The journalists asked questions such as the market size of the region and the future possibilities for the V2H system, and whether there would be more households using V2H devices than in other prefectures due to the frequency of snow in Toyama.

Kumiko is a type of traditional Japanese woodworking technique in which thinly carved wooden pieces are assembled together without nails. Tanihata Co., Ltd. was founded 60 years ago as a business using kumiko to create partitions for homes, but now they have expanded beyond kumiko for homes to make large-scale kumiko used in places such as airports, stations, foreign hotels, and clothing stores. The journalists heard from the company president about how kumiko is made, how the wood is selected, and the work environment covering multiple generations from rookies to veterans, before looking at the workspace where the artisans work on a scale where one millimeter can make a difference. The journalists asked about the history of kumiko, which started in the Asuka period (592­–700); the types of wood best suited for kumiko; and kumiko design using IT. 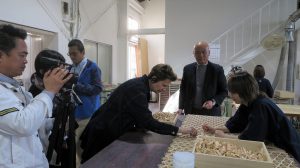 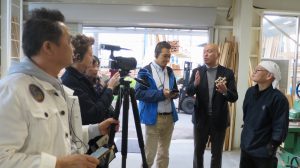