A total of 11 journalists participated in this tour, from media located in China, France, Germany, South Korea, Taiwan, the US, and Vietnam.

*This press tour was sponsored by the Tokyo University of Science, and planned and operated by Foreign Press Center Japan.

*Click here for details of the tour.
*A press tour to the Tokyo University of Science was held in March 2018 as well, covering the Space Colony Research Center (Director: Dr. Chiaki Mukai).

1.  Replications of Complex Disasters (Earthquake + Tsunami/Flooding) at the First Large-scale Experimental Facility in a University 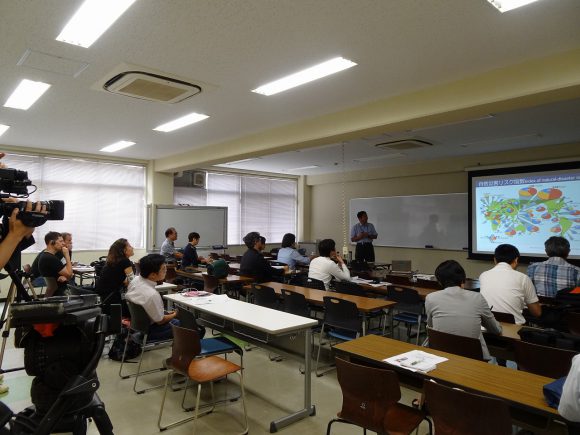 The journalists first heard from professor Yasuo Nihei, an expert in river engineering, about how frequent natural disasters are in Japan, and how complex disasters, such as when an earthquake is followed by a tsunami and practically unique to Japan, occur, based on data and past examples.

Next, he explained about the first authentic experimental waterway (33 meters long, 1 meter high, and 0.6 meters wide) at a Japanese university, completed in June 2017, made to reveal the mechanisms of complex disasters, and how the experiments using the waterway to replicate complex disasters with earthquakes and tsunami/flooding work, as well as providing examples of some past experiments. There was then explanations of the experiments to be carried out during the tour, a shaking experiment and a flooding/tsunami experiment. 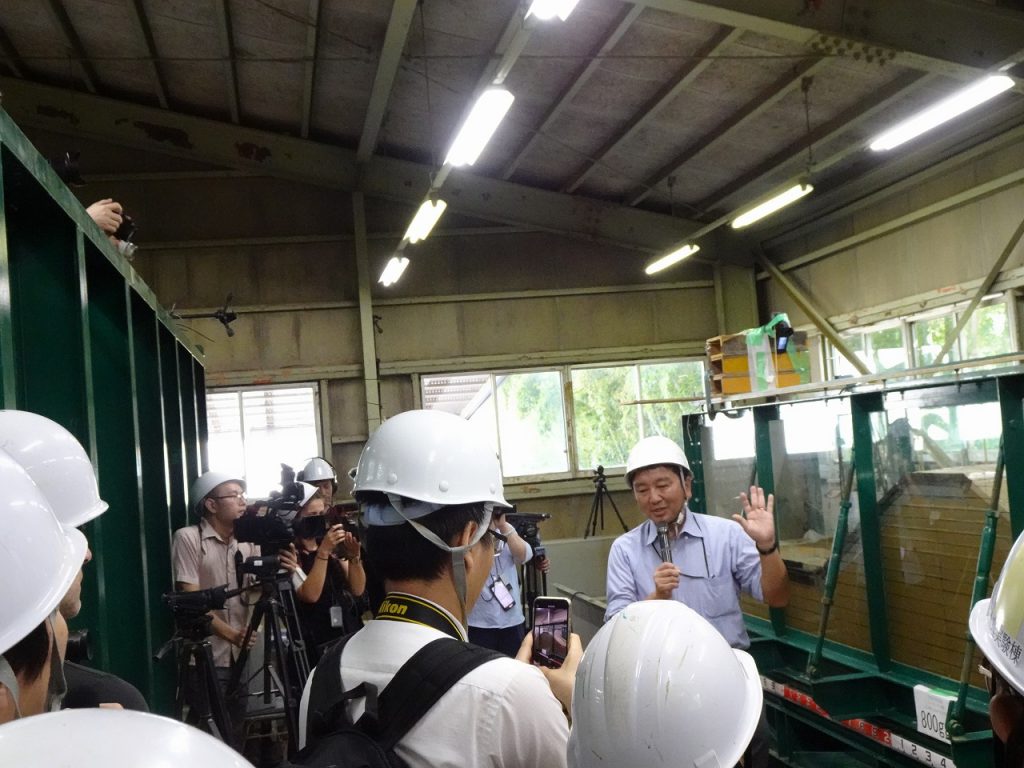 The tour moved to the Hydraulics Experimental Facility, where the journalists filmed and photographed the waterway with an approximately 50-cm-high embankment of dirt with asphalt pavement on top, while Professor Nihei explained about the waterway.

After the explanation, the first part of the experiment was carried out, inducing shaking for approximately 10 seconds, for strong seismic motion at a level similar to the 1995 Kobe Earthquake. 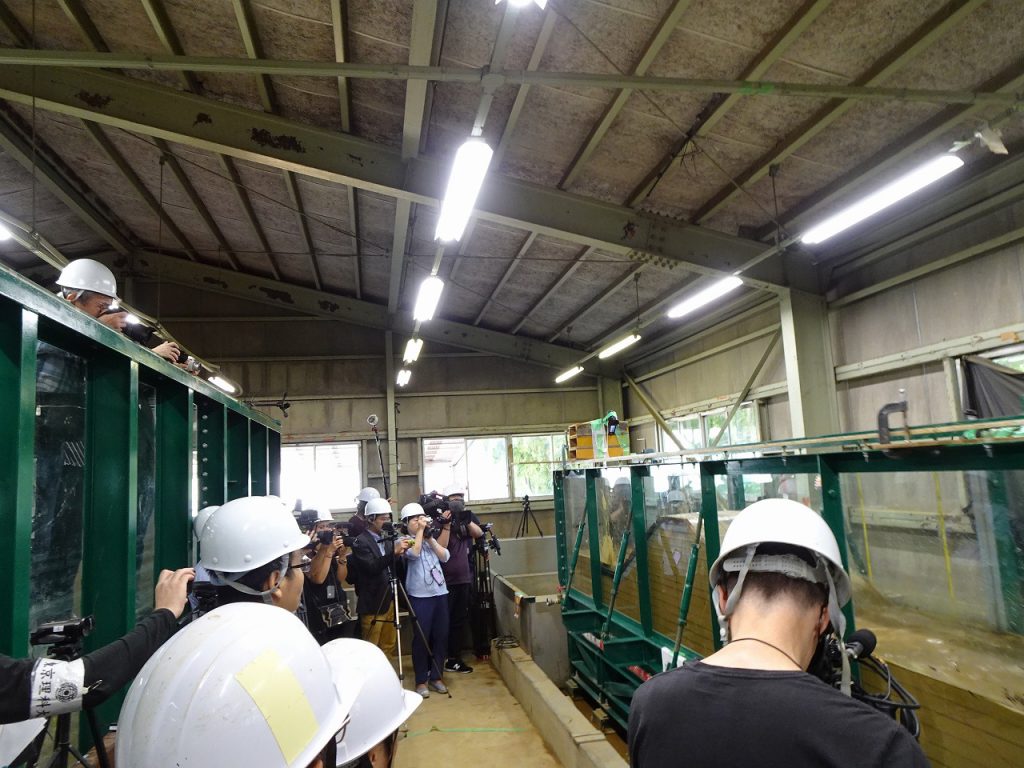 Journalists filming and photographing the experiment. Some journalists entered the other waterway to take shots from above (upper left).

After the experiment, Professor Nihei explained the changes to the embankment, such as subsidence. The journalists asked questions such as how much subsidence could actually be expected, what benefits the experiments could be expected to have, and how long he intended to continue carrying out research using the experimental waterway. 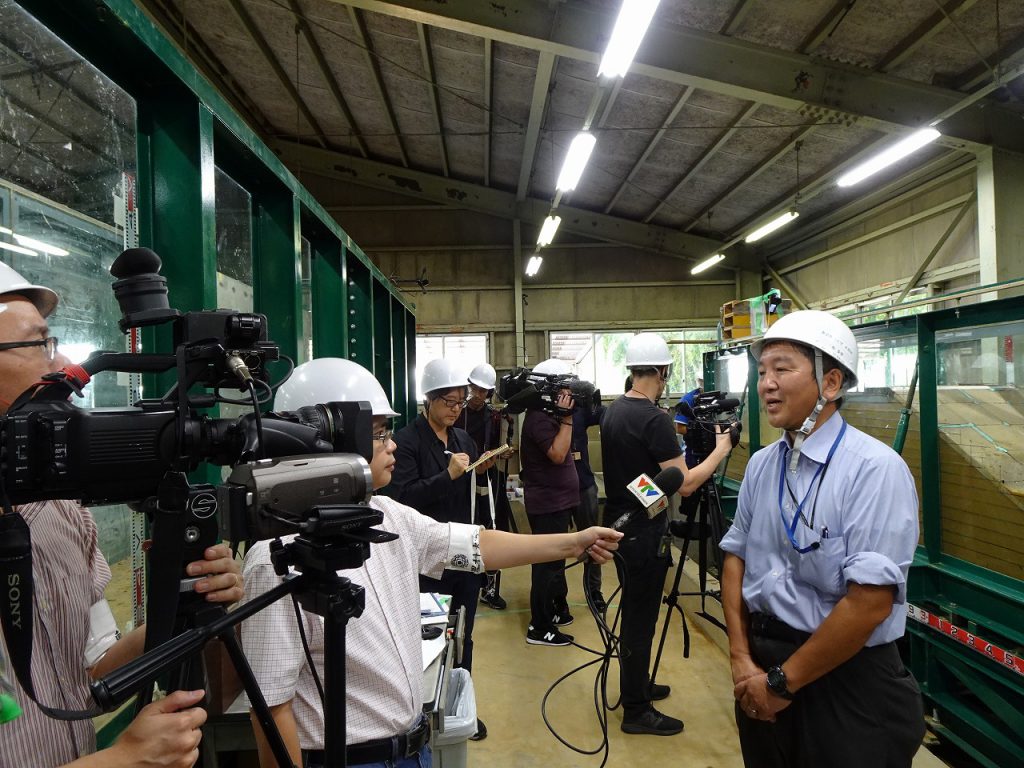 Professor Nihei being interviewed for TV after the experiment

When the flooding/tsunami experiment started, the room was filled with the roar of rushing water, and when the embankment collapsed, the journalists raised their voices in surprise. There is a reservoir located under the experimental facility, and the water is pumped up and recycled. 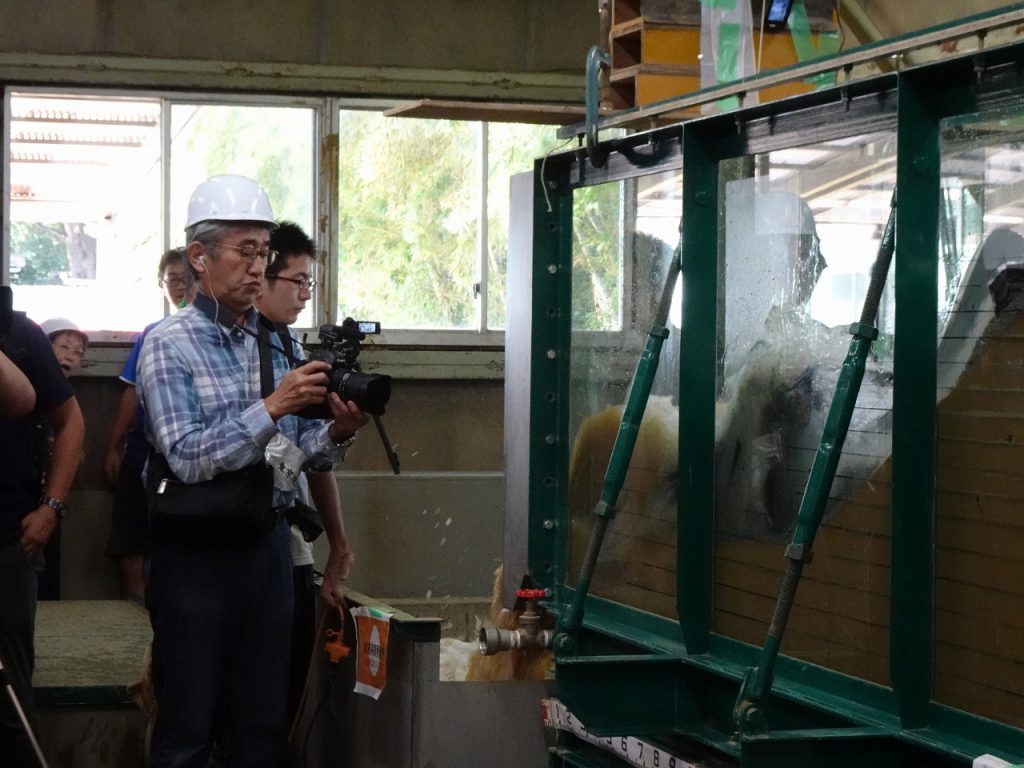 Journalists capturing the moment the embankment broke and was swept away 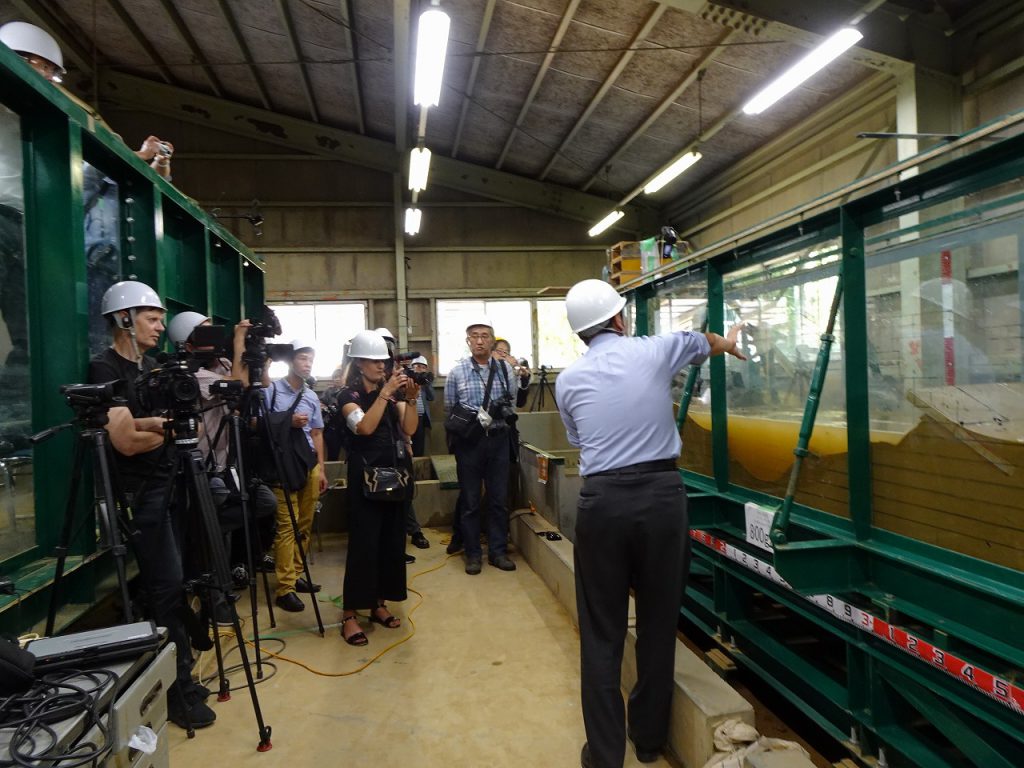 After the experiment finished, Professor Nihei provided an explanation of what happened, such as how the rear block of the embankment was swept away all at once after about seven minutes, and the paved block on the top was swept away after about ten minute and forty seconds.

The journalists asked questions about the difference between the mechanisms of tsunami and floods, the significance of carrying out physical experiments instead of using computer simulations, what practical applications the experiment results had, and what the most important factor was in embankments breaking. One journalist commented, “Since I covered the Great East Japan Earthquake, this experiment was very interesting to me.” At the end, Professor Nihei mentioned, “It takes approximately one month to prepare an experiment using the waterway, and we can only carry out three or four experiments per year. I will continue trying to improve their precision, and hope to work towards developing technology to strengthen embankments.” 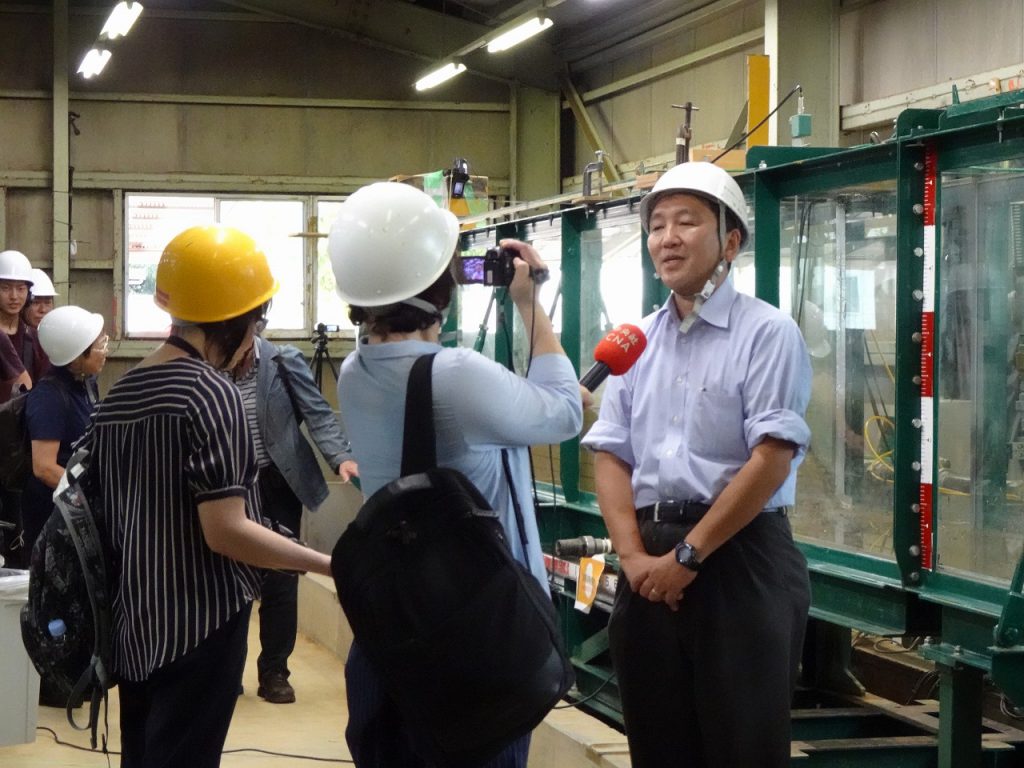 2. Researching Wearable Devices Using Biofuel Cells: To Prevent Heat Exhaustion and for Use in Space 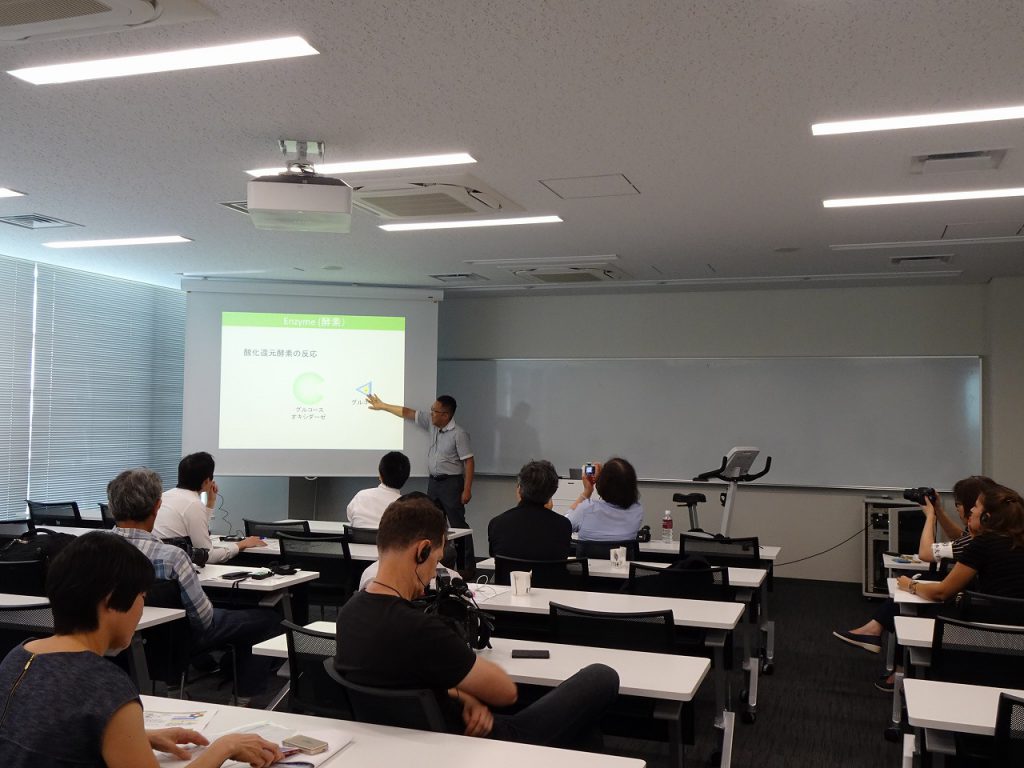 Faculty of Science and Technology lecturer Dr. Isao Shitanda explained the mechanism of biofuel cells which generate electricity from lactic acid, glucose and other elements in sweat and urine, and how they can be applied to wearable devices, while showing a biofuel cell printed using paper. 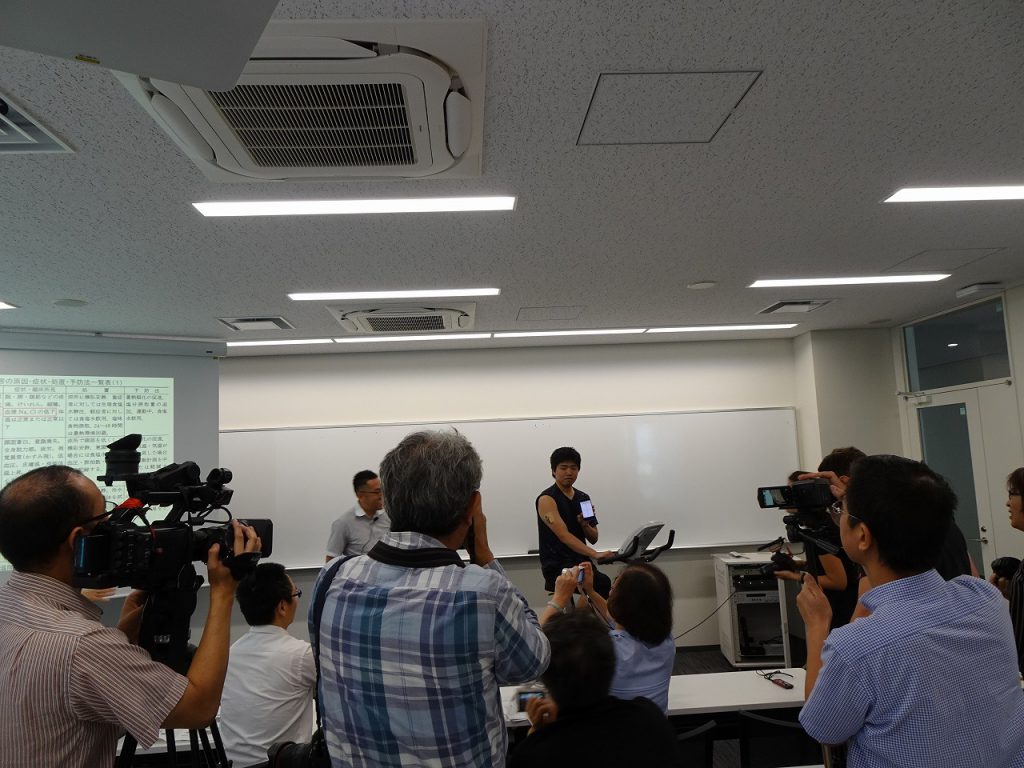 He also gave a demonstration of a small, thin sensor device including a biofuel battery which measures in real time lactic acid and glucose levels of bodily fluids, and transmits the results wirelessly. One of his students wore the device on his arm while working out on an exercise bike, and the salt concentration levels of the student’s sweat could be monitored as the journalists filmed and photographed the demonstration. 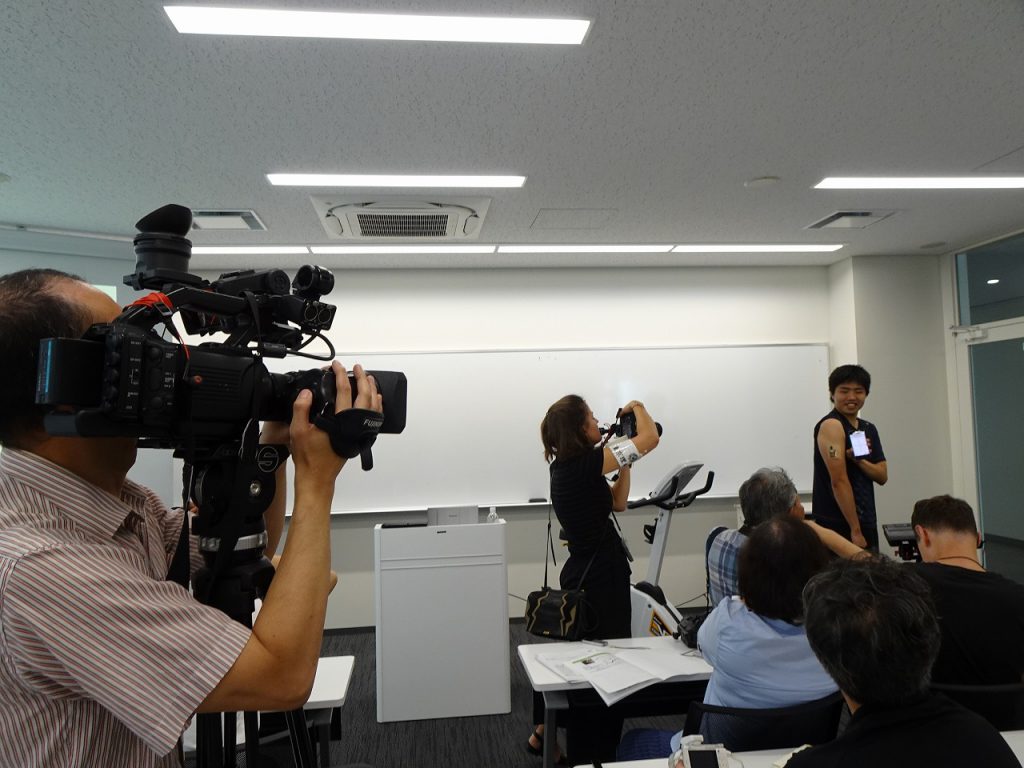 As this device combines the functions of both a power source and a sensor, it has potential for applications in a variety of areas, including for preventing heat exhaustion in athletes or construction workers, and also for nursing care.

Dr. Shitanda mentioned that former astronaut and Tokyo University of Science Vice President Chiaki Mukai was interested in this technology, and in cooperation with the Space Colony Research Center, which Dr. Mukai is the director of, research was being carried out on using it to monitor the stress and fatigue of astronauts during manned spaceflight.

The journalists asked about the production cost of the wearable devices, the potential of charging smartphones using biofuel cells, whether lights or alarms could work with power generated from sweat, whether the amount of power generated varied depending on environmental conditions, and what issues had to be overcome in order to increase the amount of electricity generated. 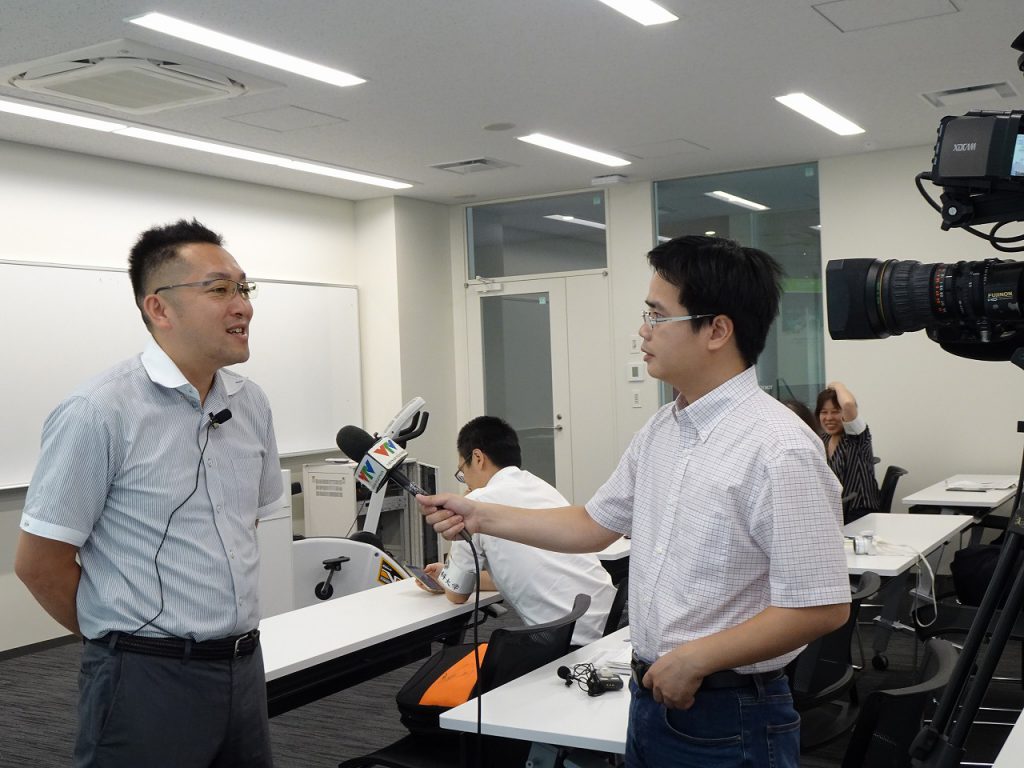 After the Q&A session, Dr. Shitanda did TV interviews, and his student was interviewed as well 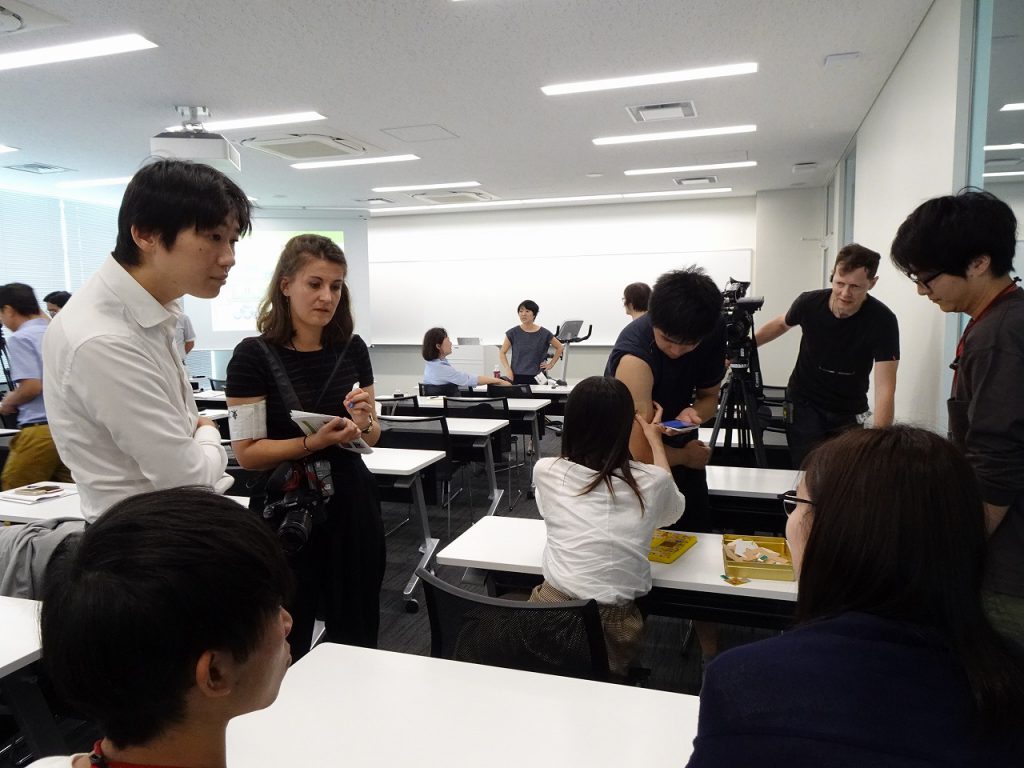 ◆Reporting by journalists based on this press tour