A press tour was held to introduce the attractions and unique characteristics of Miyazaki Prefecture to foreign correspondents in Japan, ahead of the Rugby World Cup being held in Japan this year and the 2020 Tokyo Olympic and Paralympic Games. (This tour was sponsored by Miyazaki Prefecture, and planned and operated by Foreign Press Center Japan.)

A total of 12 journalists participated in this tour, from China, France, Hong Kong, Italy, Kazakhstan, Macau, South Korea, and Taiwan.

This press tour covered three aspects of Miyazaki Prefecture: as a martial arts mecca, as the No. 1 producer of shochu in Japan, and as the setting for Japan’s origin myths.

*Click here for further details on the stops on this tour. 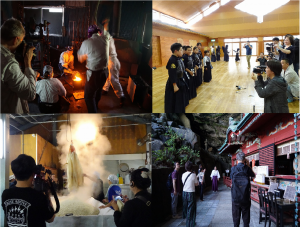 The tour visited the workshop of Mr. Kunimasa Matsuba, one of Japan’s top swordsmiths, and learned from him about the process of tempering steel while striking it with a hammer causing sparks to fly, and about the traditional process of making a sword. The journalists also interviewed his apprentices, who he is training to pass his skills on to the next generation, and asked questions such as why they decided to become swordsmiths. As Mr. Matsuba is also a martial artist, he provided an opportunity for the journalists to film him cutting something with a sword as well. The journalists commented on how impressive it was. 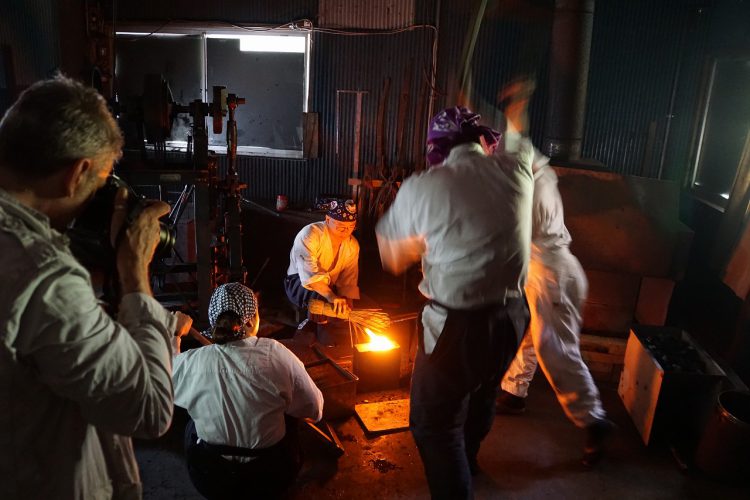 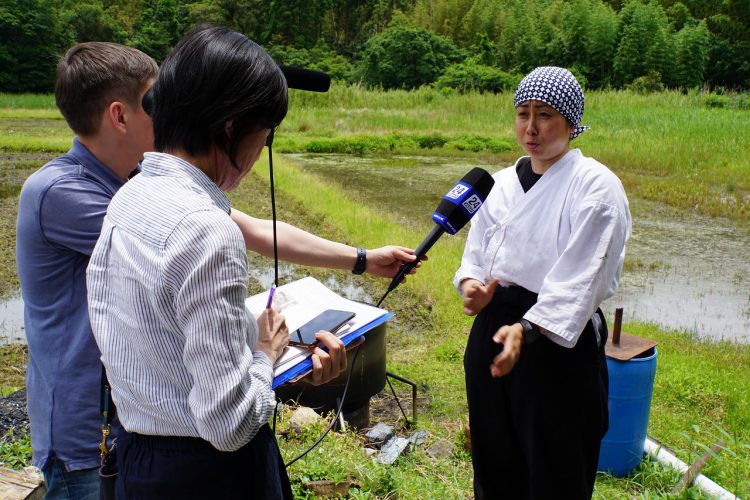 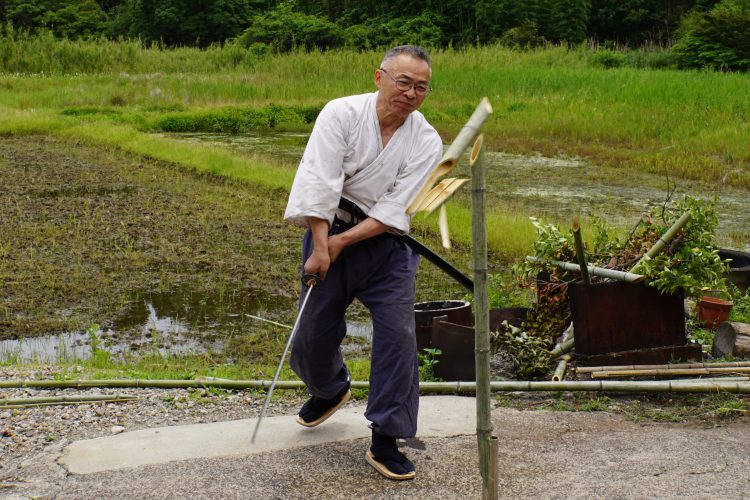 The tour visited the workshop of Mr. Ryuzo Tada, the owner of Nippon Budo Miyazaki, a kendo equipment shop in Miyazaki, and learned about his interactions with foreign kendo athletes through equipment repairs, and also about local efforts for “budo (martial arts) tourism” in Miyazaki (which the Japanese government has been promoting to target foreign tourists, since 2018), which Mr. Tada is involved in. The journalists also had the opportunity to film and photograph Mr. Tada making a kote, hand protection for kendo, by hand. The journalists asked what kote were made from and what countries were being targeted for budo tourism. 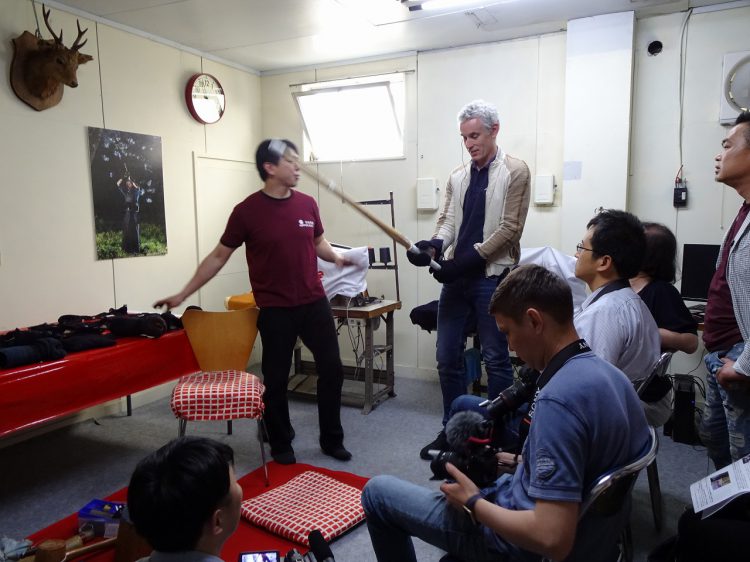 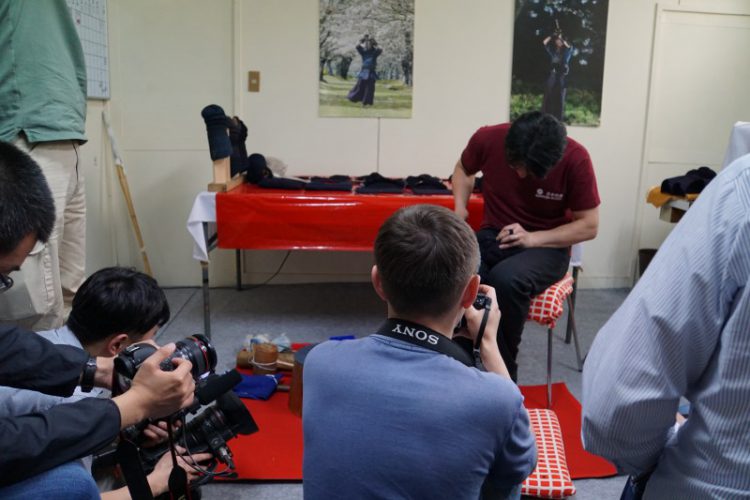 The tour visited the Miyazaki Prefectural Comprehensive Sports Park, one of the main sports facilities in the prefecture used for training by professional and Olympic athletes. The sports park has a total area of 154 hectares, with a variety of competition and training facilities available including an athletics field, baseball field, soccer field, rugby field, indoor pool, and martial arts facility. The journalists heard an explanation of the facility from prefectural government staff, and filmed and photographed the athletics field and the dome stadium made using cedar grown in Miyazaki. 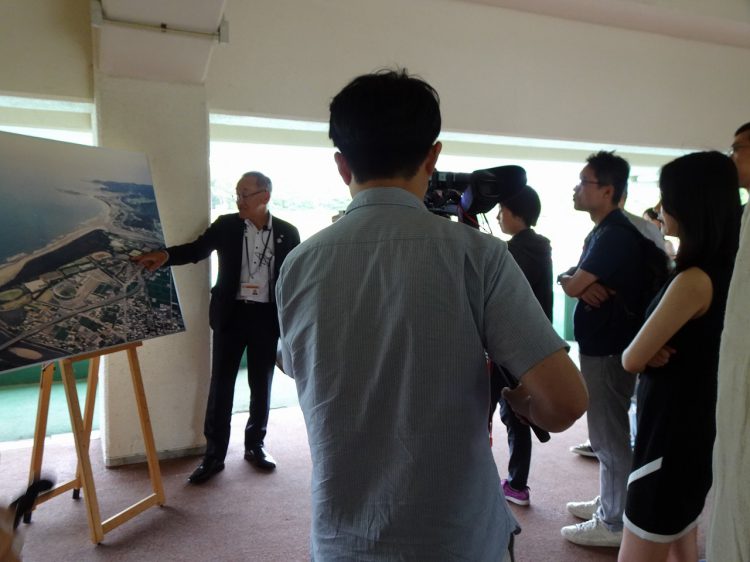 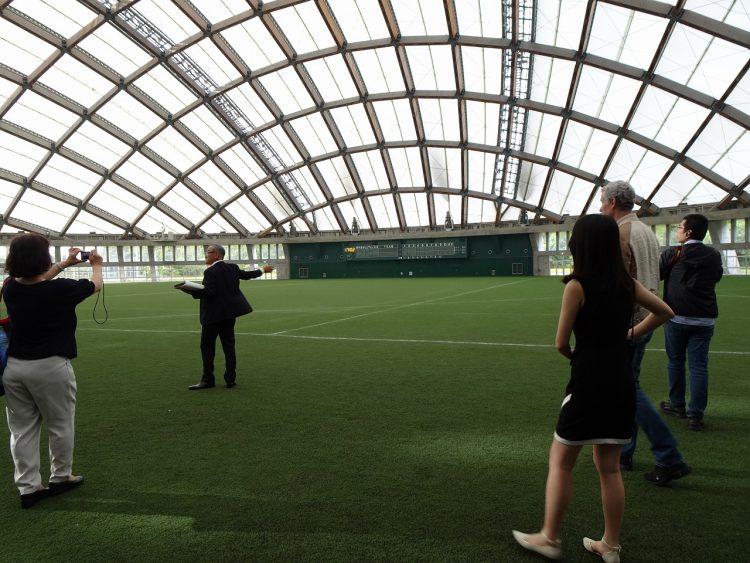 The tour went to see children from three Miyazaki kendo dojos practicing together, and interviewed the Miyazaki Senshinkan Dojo instructor, Mr. Tatsumi Iwakiri, as well as the children and their parents, about passing kendo on to the next generation. The journalists asked children why they decided to begin practicing kendo, and what made them glad they decided to do kendo. Afterwards, the journalists commented how wonderful it was that the children were focusing so hard on learning kendo, and how the energetic children left an impression. 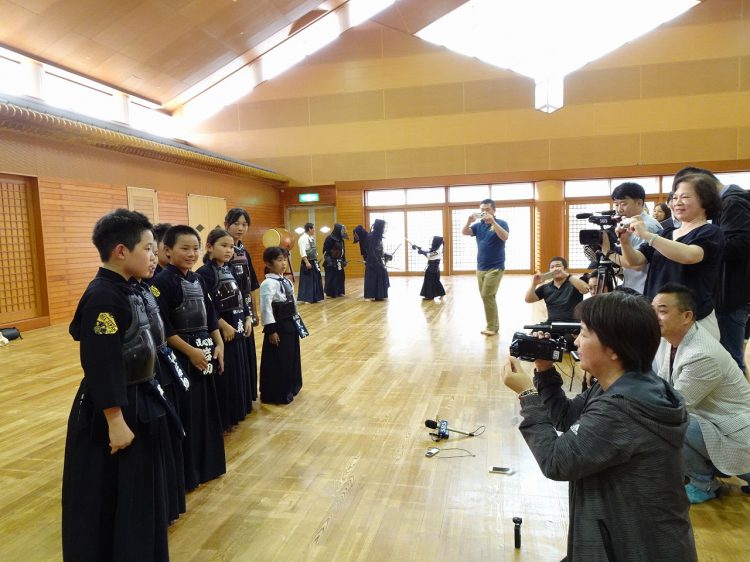 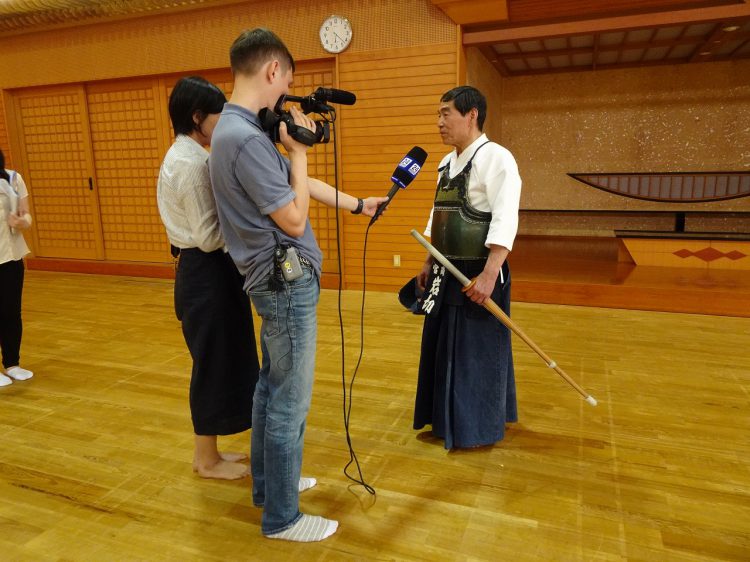 The tour visited Oura Shuzo, which demonstrates traditional shochu making processes, and learned about how shochu is made. President Shin’ichi Oura explained the process of making shochu, and about how unique flavors can be made by changing the type of sweet potatoes or yeast used, as well as other projects that can be tried thanks to being a small, family-run distillery. The journalists also had an opportunity to film and photograph the most important part of the liquor-making process, blending koji (malted rice) into steamed rice. A South Korean journalist asked about the differences between Japanese shochu and Korean soju. 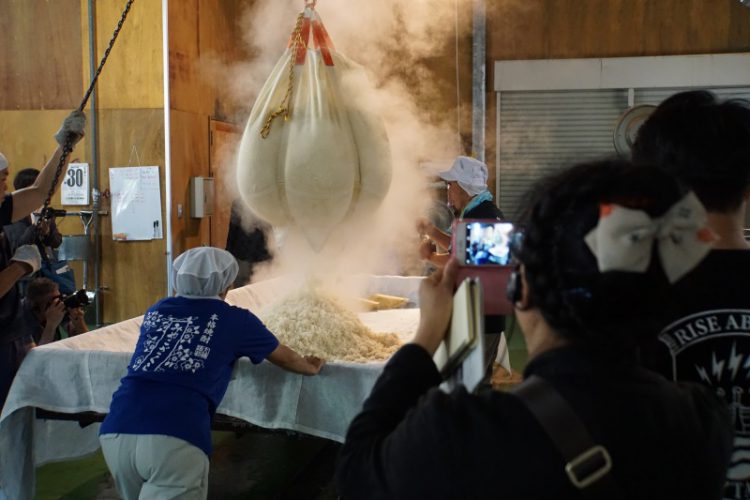 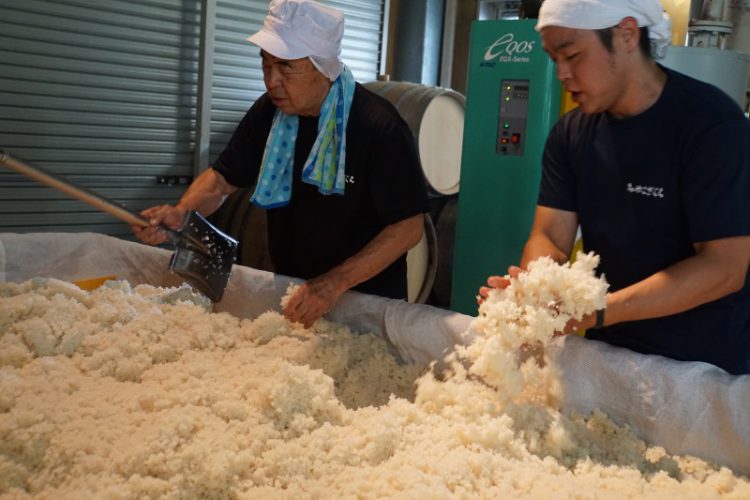 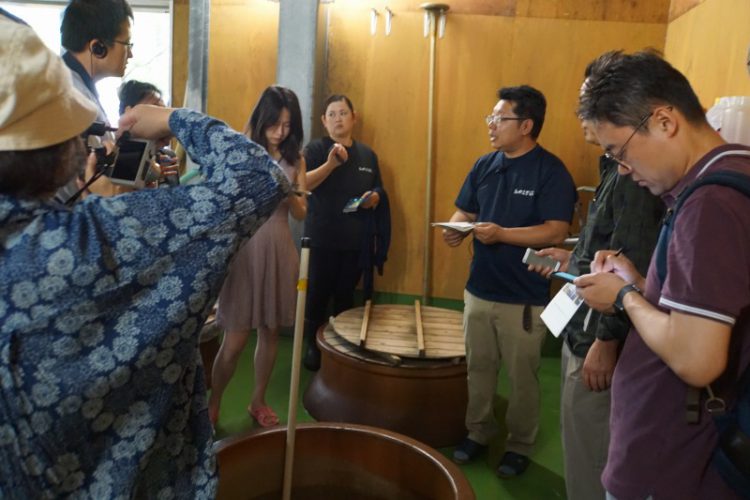 The tour visited the Shibita plant of Kirishima Shuzo, the largest shochu maker in Japan, and saw the shochu manufacturing process and a “shochu shrine.” The journalists learned about how the waste products left over from shochu production (such as sweet potato scraps) are used to make biogas which is used as fuel at the plant, in addition to generating electricity with the remaining biogas to create a cyclical system within the company. They were also able to film and photograph the exterior of the recycling plant. The journalists asked a variety of questions, about whether there were any plans to manufacture shochu overseas, plans for exports to various regions and countries, the cost of building the recycling plant, and how much the electricity generated from the biogas was sold to electric companies for. 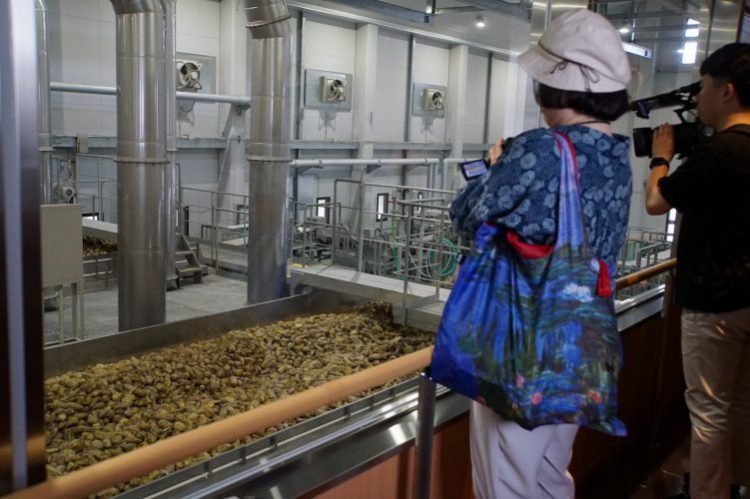 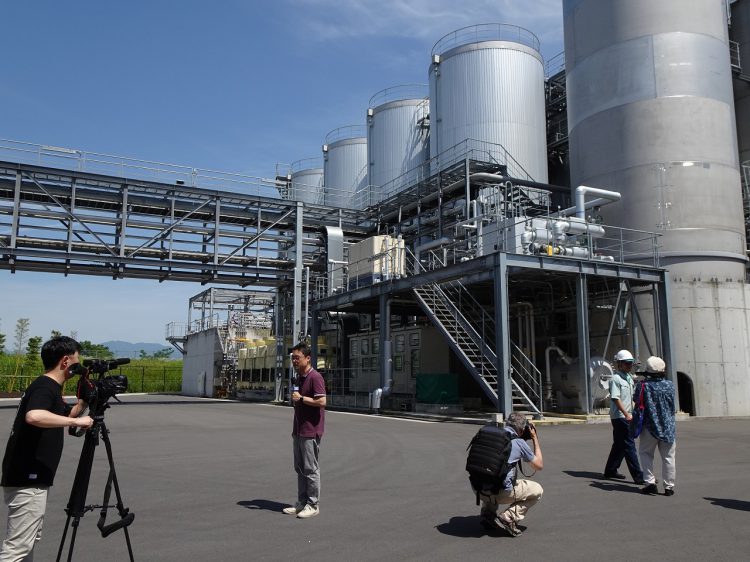 3.  Aoshima (Mystical Island Protected as the Setting of Myths)

The tour visited Aoshima, a famous sightseeing spot in Miyazaki, and saw the unique rock formations known as “oni no sentakuita (devil’s washboard),” the subtropical plants (designated as Special Natural Monuments by the Japanese government) which are rare in Japan, and Aoshima Shrine. Aoshima is the setting for myths about love and sibling rivalry involving the great-grandson of the sun goddess Amaterasu, said to be the ancestor of the imperial family, and people were forbidden from entering until 1737, as it was worshipped as a holy place. The journalists heard an explanation from a priest at Aoshima Shrine and filmed and photographed the mystical scenery of the island created by the contrast between the verdant subtropical plants and Aoshima Shrine. 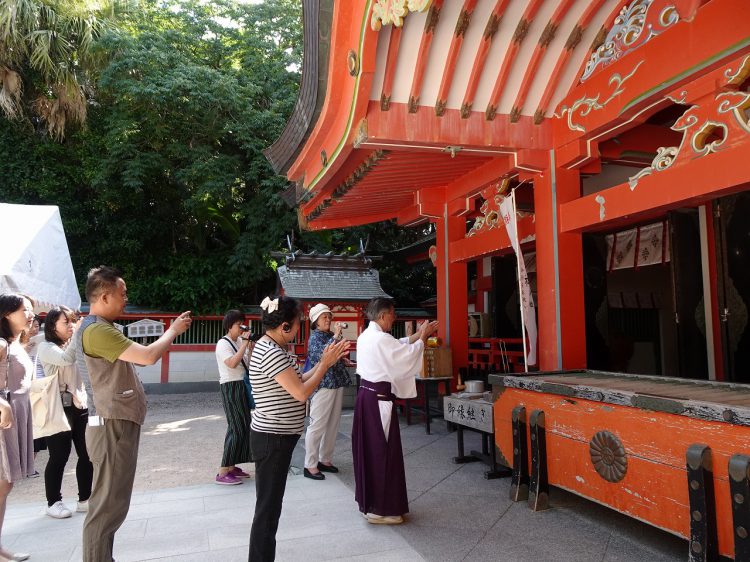 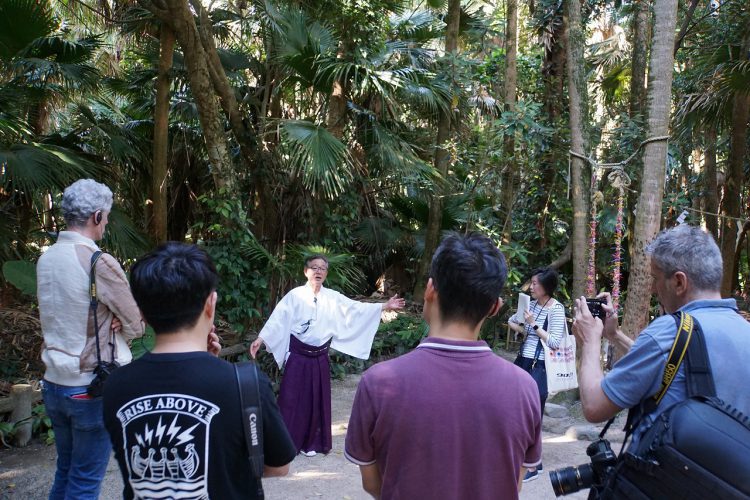 The final stop on the tour was Udo Jingu, a shrine where one of the first styles of Japanese swordsmanship is said to have originated, where a priest provided explanations. Iko Aisu, a swordsman who travelled around Japan training near the end of the 15th century, is said to have developed Kage-ryu at Udo Jingu, so it has become a mecca for martial arts enthusiasts. The journalists saw a commemorative marker from when the French Kendo Federation national team visited. Udo Jingu is said to be where a grandchild was born to the son of Ninigi-no-Mikoto (grandson of the Japanese imperial family’s legendary ancestor, the sun goddess Amaterasu), and the tour heard about this legend from a priest and saw an altar set up in a cave. The journalists took plenty of pictures of the impressive scenery of the shrine alongside the blue waters of the ocean. 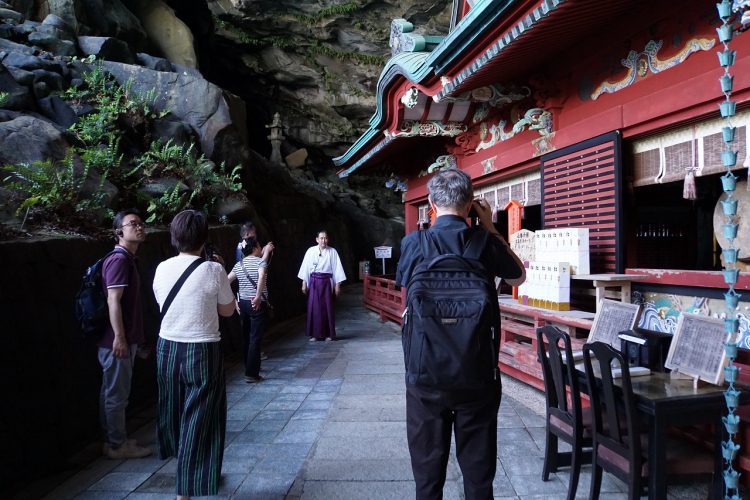 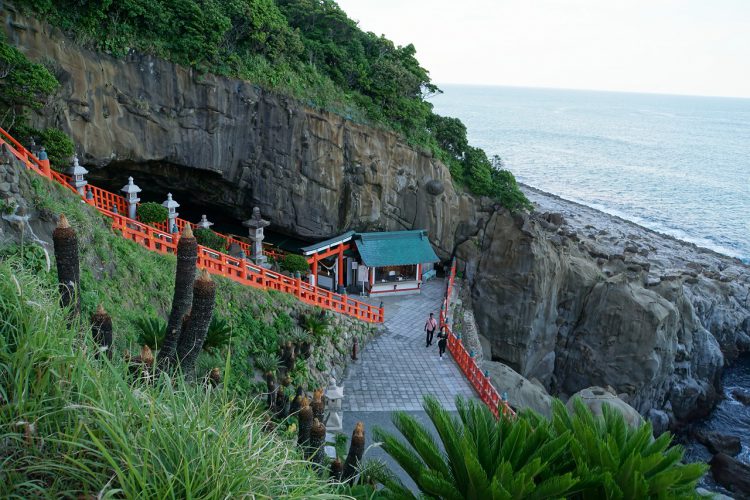 →Reposted from Global Times above