Ahead of the G20 Ministerial Meeting on Trade and Digital Economy to be held in Tsukuba, Ibaraki in June 2019, a press tour was held to let the world know about the appeal of Ibaraki. This was the final tour of a series of three press tours, and a total of 10 journalists participated, from China, Germany, Hong Kong, India, Singapore, and Vietnam, as well as from an English-language newspaper published in Japan. The tour learned about the latest initiatives in Tsukuba, the center for science and technology research and development in Japan.

◎*Click here for further details on the stops on this tour.

The tour visited a National Institute of Advanced Industrial Science and Technology (AIST) startup which has developed “3DHaptics Technology,” eliminating a long-standing problem with virtual reality: the frustration of being unable to touch the things you are seeing. With this technology, which creates a mental illusion using specific vibrations transmitted to your fingertips, by touching a small device you can feel like your hand is being pulled or you are touching a sticky or rough surface, despite nothing being there. There are hopes to use this technology in video game controllers, or apply it to the medical field with surgery simulations. When experiencing the device themselves, the journalists were surprised at how real it seemed, and asked questions about plans to commercialize the technology, what kinds of sensations could be replicated, and how quickly the technology in this area was being developed. 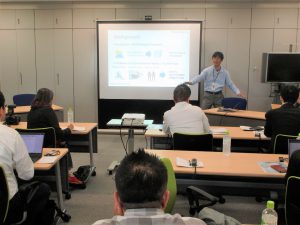 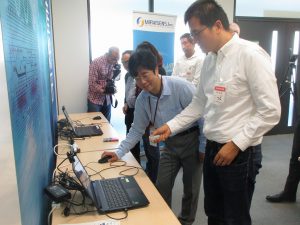 WARPSPACE Inc., a startup from the University of Tsukuba, is working on supporting the stable communication infrastructure that will be necessary for the various economic activities humanity will be carrying out in space more and more frequently going forward. The tour visited the company, and learned about their business of installing multiple small ground stations for communications with space in areas where there are only a limited number, such as the southern hemisphere, and operating numerous miniature communications satellites that are only 10 cubic centimeters. There were opportunities to film and photograph a model of one of the miniature communications satellites, and also the small ground station installed on the roof of the building Warpspace is located in. The journalists asked questions about how these miniatures communications satellites would be used as the world moves into an era of super-high-speed communications with 5G, and their relationship with the struggle among different nations for control of space and security issues. 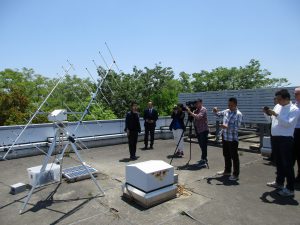 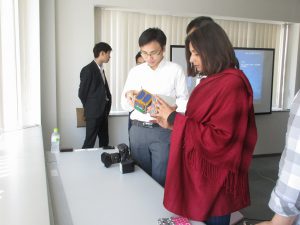 The National Institute for Materials Science (NIMS)is working on medical applications for smart polymers, materials which can change their shape and functions in response to factors such as lights or magnets. The journalists learned about cutting-edge research such as a mesh for cancer treatment that can eliminate cancer cells just by applying it to the area afflicted with cancer and exposing it to a magnetic field, instead of using expensive cancer drugs, and a device using smart polymers that absorbs uremic toxins, allowing for simple dialysis treatment even when the necessary infrastructure is not available. Dr. Ebara, one of the leading researchers in this field, commented, “Of the seven billion people in the world, five billion are living on less than two dollars a day. I would like to make it so anyone can receive medical treatment, using a piece of polymer the size of a tissue.” Afterwards, one of the journalists stated, “This technology gives hope for the future of humanity.” 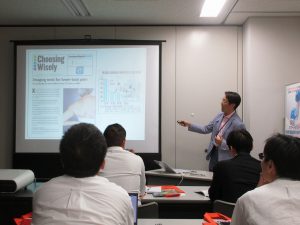 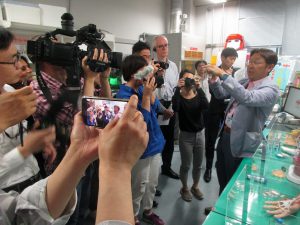 LIGHTz Inc. is working on developing a system that will accumulate and pass on the thought processes of people described as “specialists” and “legends” by converting them to AI. The tour visited the gymnasium of the University of Tsukuba, and learned about the application of this system to sports (volleyball) in particular. An explanation was provided of how, using an AI created with accumulated data, an analysis was carried out of what the players were thinking when they made plays, and how it could be applicatied to simulations before matches. The coach of the University of Tsukuba girls’ volleyball team, which is cooperating in the development of this system, participated in the interview, and the journalists asked questions about the practicality of AI in the field of sports when multiple complicated factors such as how opposing players move are involved, and how using AI has affected the team’s results. 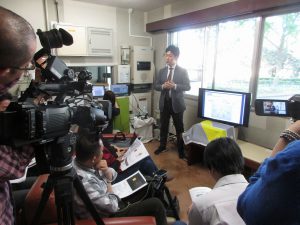 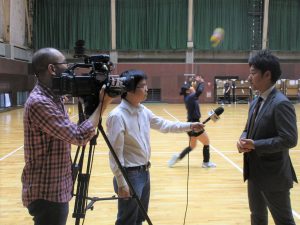 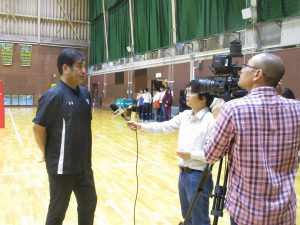 The tour visited a seniors care facility, Carehouse Seele, that uses Gokuri, a device developed by PLIMES Inc. which uses AI to monitor whether swallowing is occurring properly. The journalists heard from PLIMES about how aspiration pneumonia caused by failure to swallow properly is a common cause of death for seniors in Japan, how Gokuri (which was developed to solve this problem) works, and their future plans, followed by a demonstration by one of the residents of swallowing being measured. The director of the facility also explained what led to them using Gokuri, their feelings on it, and their hopes for the future. The journalists asked about changes to the health of the residents since introducing Gokuri to the facility, plans for expansion overseas, and whether there were any restrictions on exporting Gokuri. 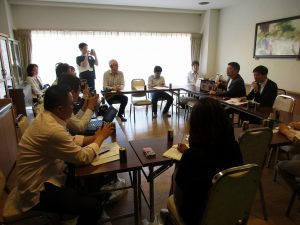 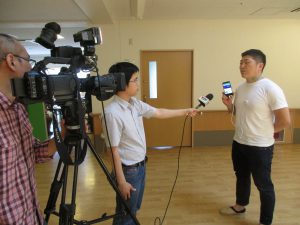 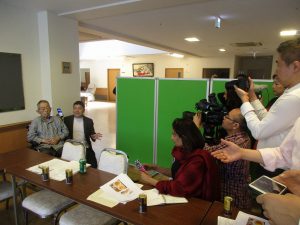 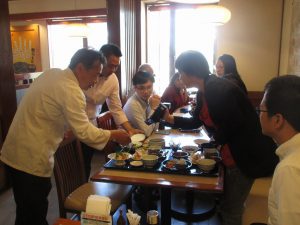 The tour visited Suginoya, an Ibaraki chain of Japanese restaurants centered in the northern Kanto region, and learned about how they began selling easy-to-swallow foods in 2018. There was an explanation of how Suginoya developed them together with the Ibaraki Speech Therapist Association, who the easy-to-swallow foods are for, and how they are prepared, along with the comment, “Eating out is one of the great pleasures for seniors living in care facilities. We made sure the meals looked good, as well as being easy to eat.” The journalists tried the sashimi Japanese meal set and the Japanese-style hamburger set. 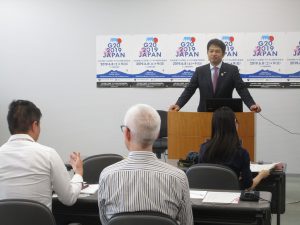 The tour visited the Ibaraki Prefectural Office, and heard from Ibaraki Governor Kazuhiko Oigawa about the prefecture’s vision for leading innovation in cutting-edge technology, and hopes towards the G20 Ministerial Meeting on Trade and Digital Economy to be held in Tsukuba. After the governor explained initiatives to create a stable environment for startups to expand their business, the journalists asked questions about what barriers existed preventing the growth of those companies, what issues the governor would like to tackled consider his experience as an executive in an IT company, what science and technology fields the governor was personally interested in, and what aspects of the prefecture he would like people from overseas to see, considering Tsukuba had been chosen as the venue for the G20 Ministerial Meeting on Trade and Digital Economy. Before the interview, the journalists were given the opportunity to taste three kinds of melon, such as Ibaraking, since Ibaraki Prefecture produces the most melons in Japan. 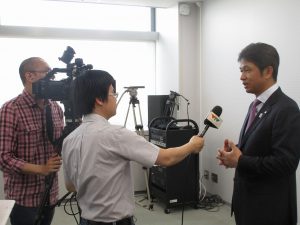 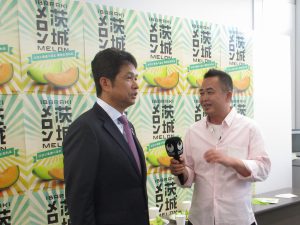 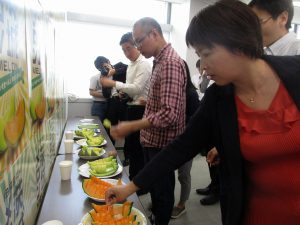 The tour visited the University of Tsukuba Digital Nature Group and spoke with the students who developed the Telewheelchair, an electric wheelchair which incorporates advanced technology. There was an explanation of the Telewheelchair’s concept combining human and artificial intelligence in order to reduce the burden on caregivers considering Japan’s aging society, and of the features of the Telewheelchair including remote control and automatic stopping using image recognition, followed by a video of a demonstration being carried out at a nursing care facility. The journalists asked about plans for commercialization, what kind of situations the Telewheelchair was expected to be used in, how many chairs could be remotely operated at once, what the operators had to pay attention to, and what issues remained to be solved. 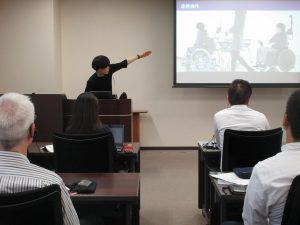 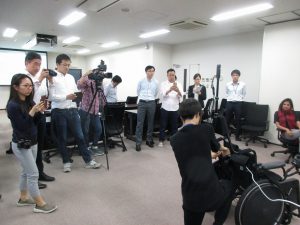 The Japan Times
June.7 Japan startup believes its cheap, light 'touchable' 3D tech could transform everything from VR to shopping

Aug. 11 How AI is changing cities