This tour visited Osaka and Hyogo 100 days before the start of the G20 Summit, to cover companies with a strong presence in niche markets and companies solving issues with new technology using their experience from major disasters such as the Kobe Earthquake, seeing the industrial strength that is the source of Kansai’s vitality. A total of 13 journalists participated in the tour, from media outlets in China, Germany, Singapore, South Korea, Taiwan, and the UAE/US.

*This press tour was sponsored by the Kansai Promotion Council for the 2019 G20 Osaka Summit, and planned and operated by the FPCJ.

The tour visited INTEX Osaka, which will be used as the venue for the G20 Summit, and heard from the Secretary General of the Kansai Promotion Council for the 2019 G20 Osaka Summit, which sponsored the tour, about plans for welcoming leaders from around the world, and the capabilities of INTEX Osaka as a major convention center. After filming and photographing inside INTEX Osaka, the tour moved to the observation deck of the nearby Sakishima Cosmo Tower. There, while viewing Yumeshima and Maishima from 252 meters above the ground, the tour heard about preparations for Expo 2025 in Osaka and efforts to attract integrated resorts. The journalists asked questions about whether there was sufficient accommodation for the world leaders from over 20 countries who would be attending the summit to use, how the venue will be used, whether there was any danger from tsunami considering Yumeshima and Maishima are islands made from reclaimed land, the cost of the Osaka Expo and who would be paying for it, and how facilities would be used afterwards. 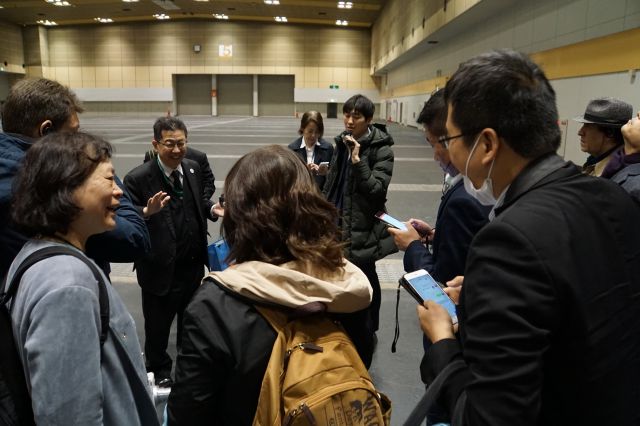 This company, which specializes in building temples and shrines, was established in 578, and with 1440 years of history is said to be the oldest company still existing. The tour visited Kongo Gumi’s Kansai processing center in Sakai, where in addition to hearing about the history of the company, the group was able to film and photograph demonstrations of drawing full-size blueprints to cut the wood to the proper sizes, and of shaving the wood. The journalists showed significant interest in the company’s ideas on continuing on to the next generation, and asked questions such as whether they were suffering from a shortage of young workers as many other SMEs are, whether they hire experienced miyadaiku (shrine carpenters) or train people themselves, whether young people wanting to become miyadaiku applied for jobs there, and whether they thought the population decline was affecting them. 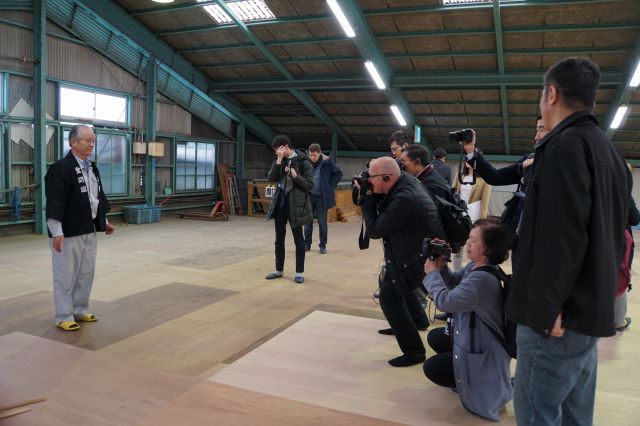 The tour visited Hitachi Zosen’s Disaster Prevention Solutions Laboratory at its Sakai factory, where it covered the flap gates the company developed to help prevent damage in the case of tsunami, storm surges, flooding, and heavy rains. The journalists saw a demonstration using 90 tons of water, in which land-based flap gates rose up in response to the water. After, they heard that 100 of these flap gates had already been delivered within Japan, and asked questions about what challenges there were to increasing adoption of flap gates in Japan, and whether the unit cost reduced when they entered licensing contracts with other companies to increase their production and sales capacity. 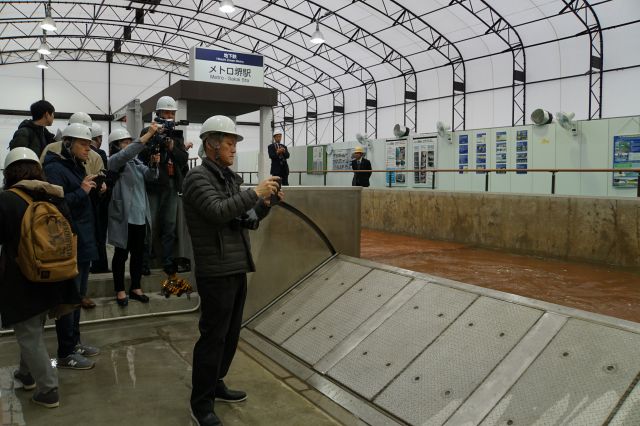 The tour visited the Sanda factory of Morita, Japan’s No. 1 fire truck manufacturer, ranked third in fire truck sales globally and with approximately 90% domestic market share for ladder trucks. There, they saw a truck with the NEA (Nitrogen Enriched Air) System developed by Morita, which creates air with a high concentration of nitrogen and lowers the oxygen level to prevent fires from spreading; a small off-road fire truck developed last year; a ladder truck with a 30-meter ladder; and the production line for these vehicles. Since Morita exports ladder trucks mainly to Asia, the journalists asked questions about the company’s share and its competitors in the Chinese market, as well as questions about whether the business was influenced by the economy, and how many trucks with the NEA system and small off-road trucks had been shipped, and what inspired their development. 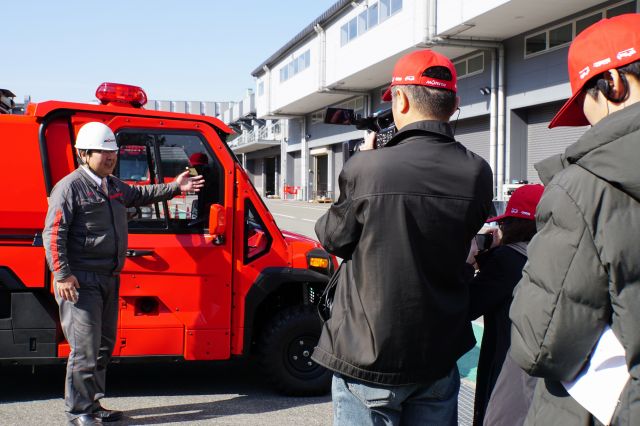 The tour visited Otowa Electric, a specialist in researching and developing lightning protection products which has 60% of the Japanese market share for distribution arresters and has supplied products for the Shinkansen and buildings such as Abeno Harukas. There, the group heard from Mr. Osamu Yoshida, the third-generation company president, about the company’s business and future plans. Afterwards, the tour saw an impressive demonstration of the company’s testing facilities, showing the changes that occurred to a piece of wood when large amounts of current are run through it and voltage applied, and the capabilities of distribution arresters. Journalists asked questions about the business such as when the company started focusing on testing, the scale of its testing facilities compared to others around the world, and whether it was possible to recycle the energy from lightning strikes into electricity, as well as other questions such as whether they were feeling the labor shortage, if they had hired any foreign workers, and whether Mr. Yoshida would designate his son as the next company president. 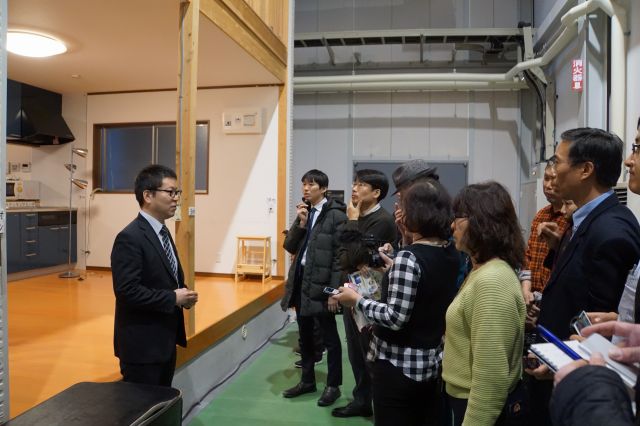 After eating lunch at a restaurant in this shotengai (shopping street), said to be the longest in Japan, the journalists spent 30 minutes exploring the shotengai and enjoying its classic and friendly atmosphere.

The tour visited the head office of Kawamura Gishi, the largest prosthetics and orthotics maker in Japan, where the journalists filmed and photographed prosthetics and orthotics being made and interviewed the company president and staff making the seating for a paracanoe athlete hoping to compete in the Paralympics. The journalists asked about the company’s role in the Paralympics, what issues with the aging society the company could solve, the trick to ensuring a company can continue to run for so long, and whether the company president, as the third-generation president since his grandfather founded the company, wanted his son to become the fourth-generation president. 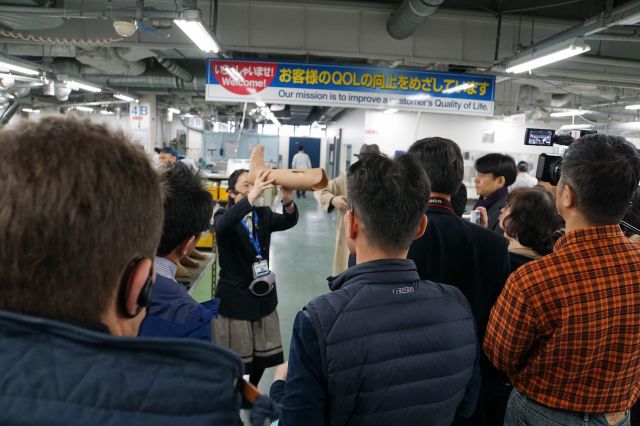 The tour visited Hardlock Industry, which since its establishment over 40 years ago has produced the Hardlock Nut, known for being the nut most resistant to loosening in the world, and heard from the company president, Mr. Katsuhiko Wakabayashi, company founder and developer of the Hardlock Nut, about what led to the development of this long-selling product and where it has been used. Afterwards, the journalists saw a demonstration comparing the loosening of a normal nut and a Hardlock Nut. The journalists asked questions about whether there were copycat products, how many patents the company had, what overseas markets they were focusing on, whether they had any foreign workers, and what their corporate philosophy was. 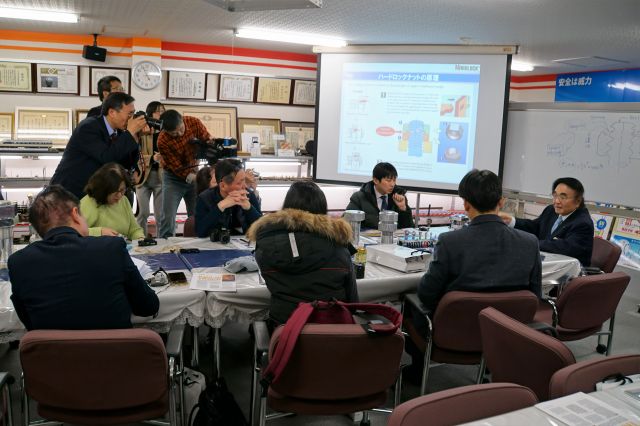