A press tour was held to Kochi prefecture on November 14 and 15, 2016, to cover earthquake and tsunami preparations, efforts to reduce population decline, and innovation in craftsmanship. A total of 12 journalists participated in this tour, from China, Denmark, Hong Kong, Spain, Switzerland, Taiwan, the UAE, and Vietnam. 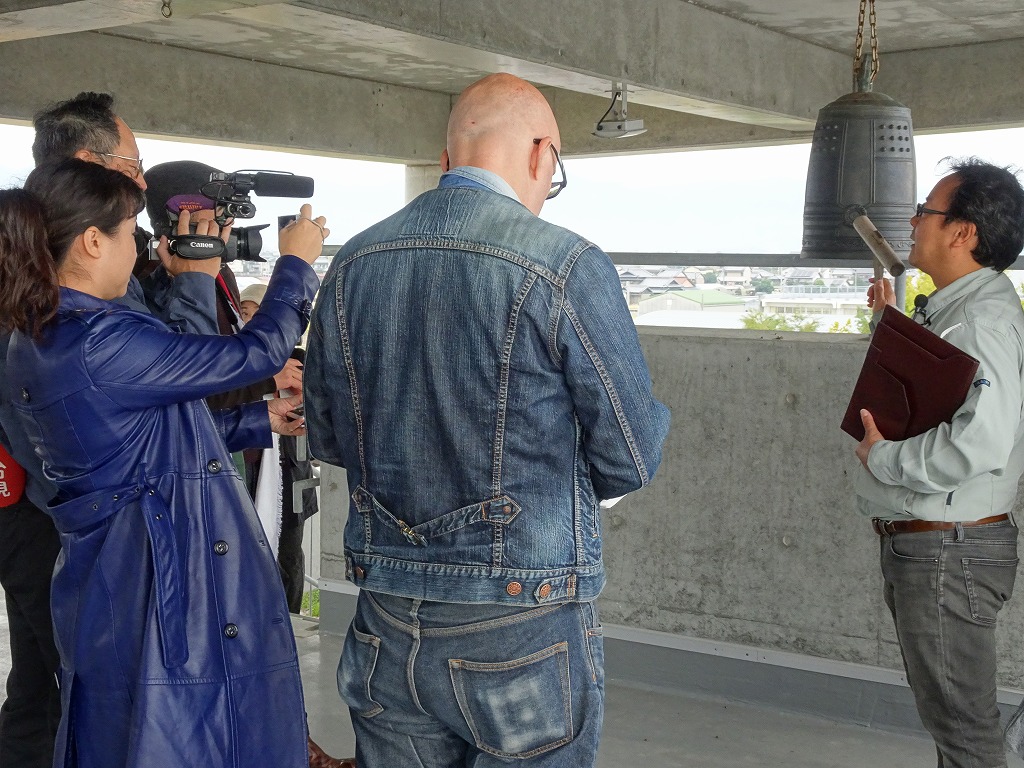 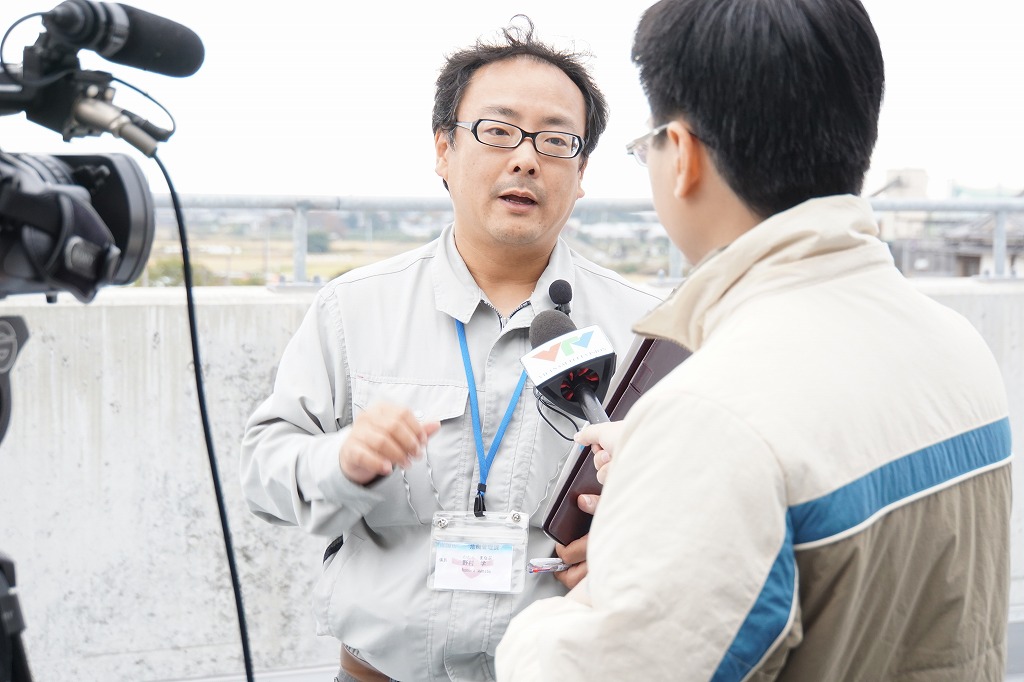 After arriving at Kochi Airport, the tour traveled 20 minutes by bus to the Ominatosho-minami tsunami evacuation tower. This tower was built to prepare for the big Nankai Trough earthquake that has been predicted. Together with Mr. Manabu Nomura, Nankoku City Hall Risk Management Section Chief, the journalists toured the three-floor tower and heard about the layout of the storage area, the emergency goods stored there, panels to make private areas for toilets or breastfeeding, and a warning bell. When asked how the local residents felt about having tsunami evacuation towers built, Mr. Nomura replied, “Since the decision on where to build the towers was made after discussing with residents where the easiest areas to evacuate to were, it was possible to build all 14 towers in the city quickly. The number of victims during an earthquake or tsunami can be reduced if each resident is aware and prepared for disasters.” The journalists asked about the cost of building the towers and whether they were subsidized by the national or prefectural governments, the frequency of evacuation training using the tsunami evacuation towers, and whether the 14 towers were large enough for all the residents of Nankoku to evacuate to. 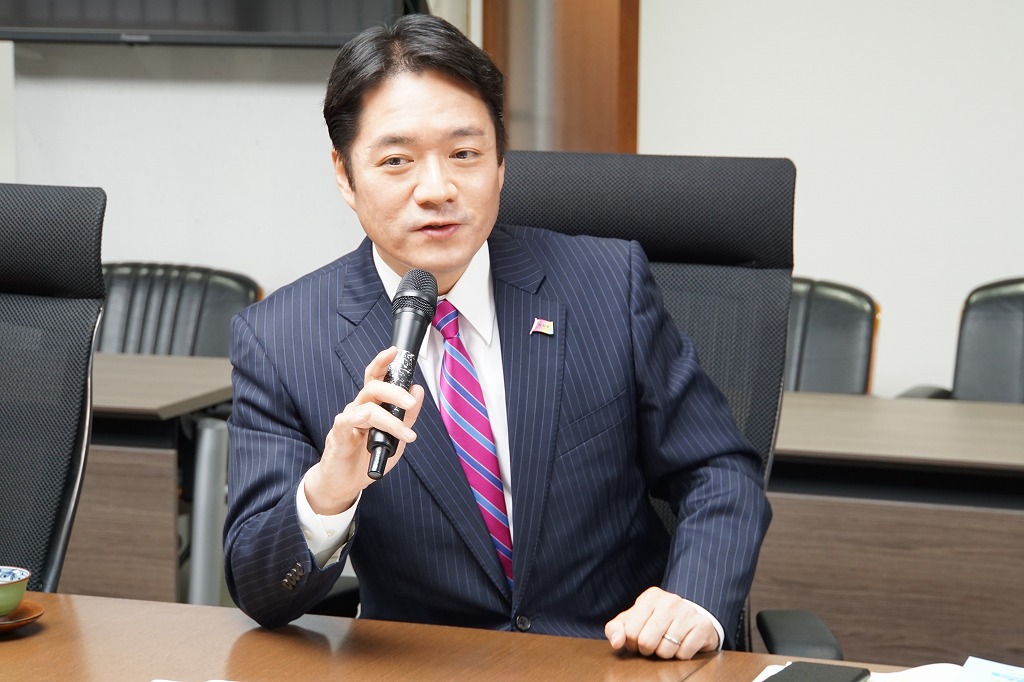 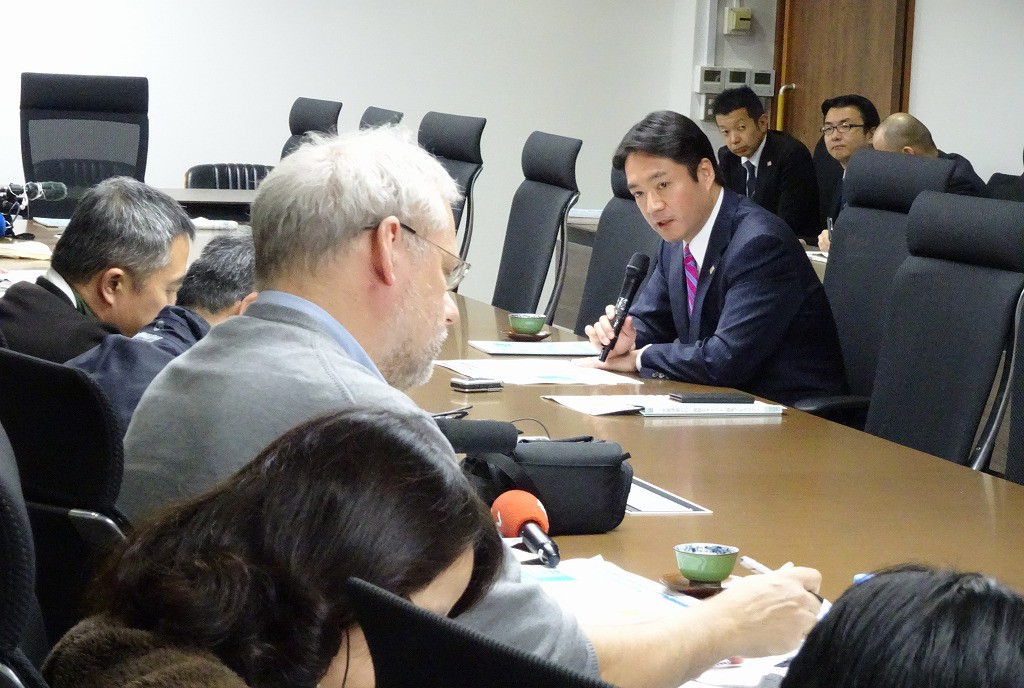 The journalists interviewed Governor Masanao Ozaki at the Kochi Prefectural Office. The governor introduced Kochi Prefecture’s disaster prevention policies, and commented on the heavy damage expected from the Nankai Trough earthquake: “By preparing, we can minimize the damage. Instead of giving up, I plan to implement every countermeasure I can.” The governor also spoke about how Kochi Prefecture was taking advantage of its experience with frequent typhoons, encouraging the local disaster prevention industry and promoting Kochi disaster-prevention technology and products overseas. The governor finished by mentioning the High School Students Summit on World Tsunami Awareness Day in Kuroshio later that month. The journalists asked questions about efforts to provide foreigners with disaster prevention information and to deal with foreigners during disasters, what policies were in place to help seniors evacuate, and what countries the prefecture was targeting for sales of disaster-prevention products.

After the interview, Mr. Yoshifumi Kubota, Nankai Trough Earthquake Team Leader of the Kochi Prefectural Government Risk Management Division, spoke about the predicted damages from the Nankai Trough earthquake, and the countermeasures in place. Mr. Norihisa Kuriyama, Industrial Promotion Team Leader of the Kochi Prefectural Government Commerce, Industry and Labor Division, then spoke about the prefecture’s certification and registration system for disaster prevention products, to support the local industry. At lunch, the journalists had the chance to try canned food from Kuroshio, which was certified under this system. 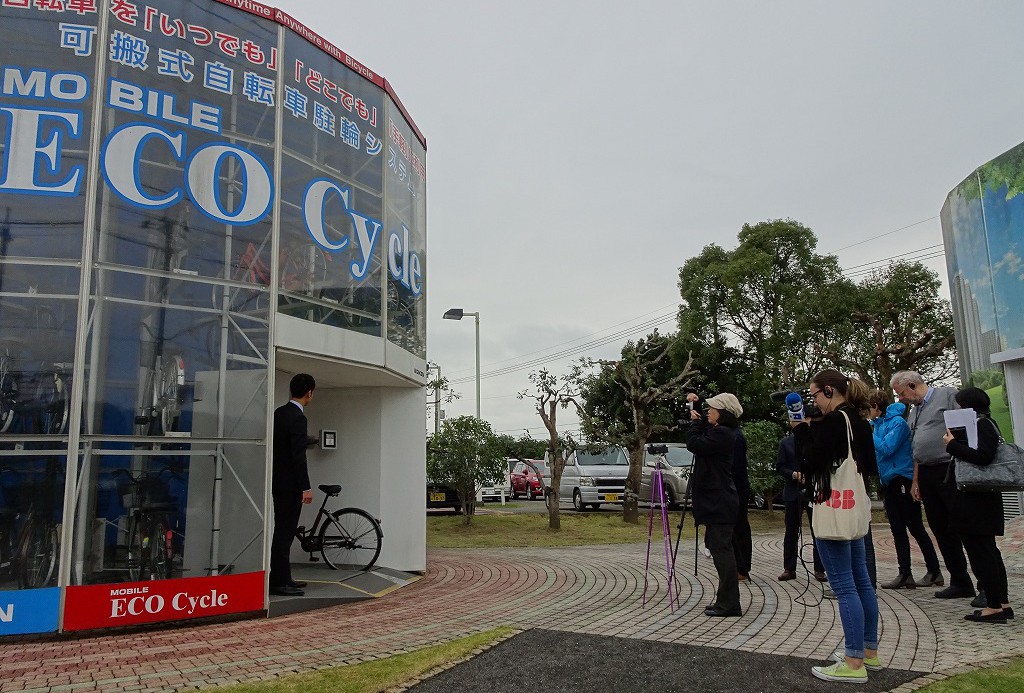 The unique pile implant method developed by Giken Ltd., a construction company with its headquarters in Kochi, is used around the world. Mr. Daisuke Hirose, manager of the General Affairs Department General Affairs Section, explained the company’s unique “implant method” that uses hydraulic power to implant piles in the ground. The journalists then had the chance to film and photograph the Silent Piler pile jacking machine, a tsunami simulator for testing pile strength with actual water, and the Eco Cycle bicycle parking facility developed using pile jacking. In an interview with Giken president Mr. Akio Kitamura, who developed these technologies, journalists asked which countries were leaders in disaster prevention technology, the cost performance of the implant method compared to older methods, and whether Giken’s methods could be used in countries other than Japan. 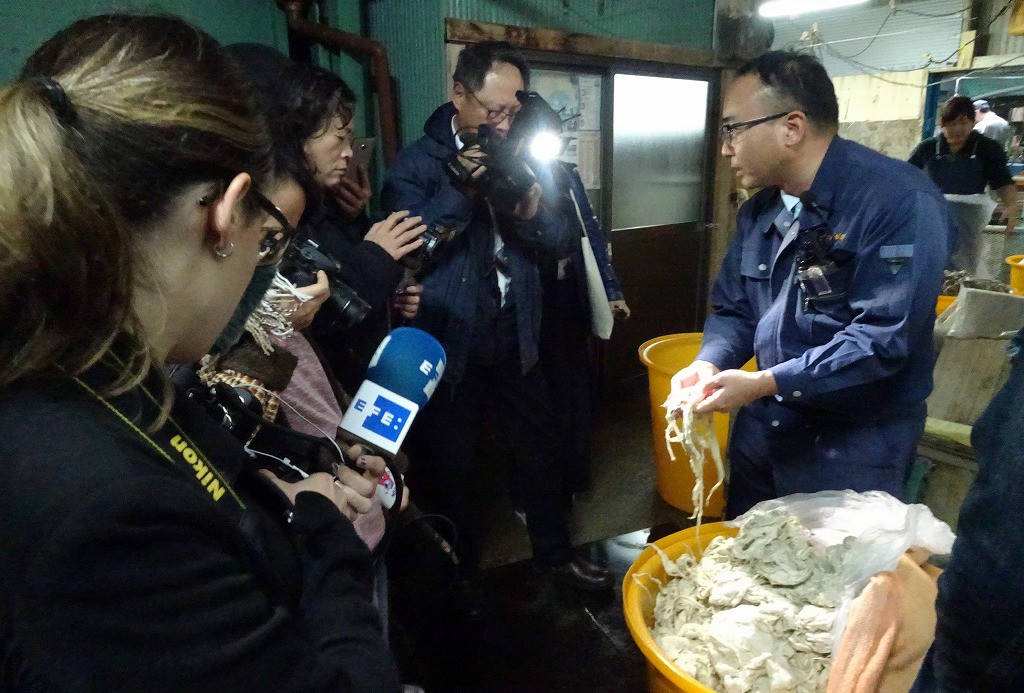 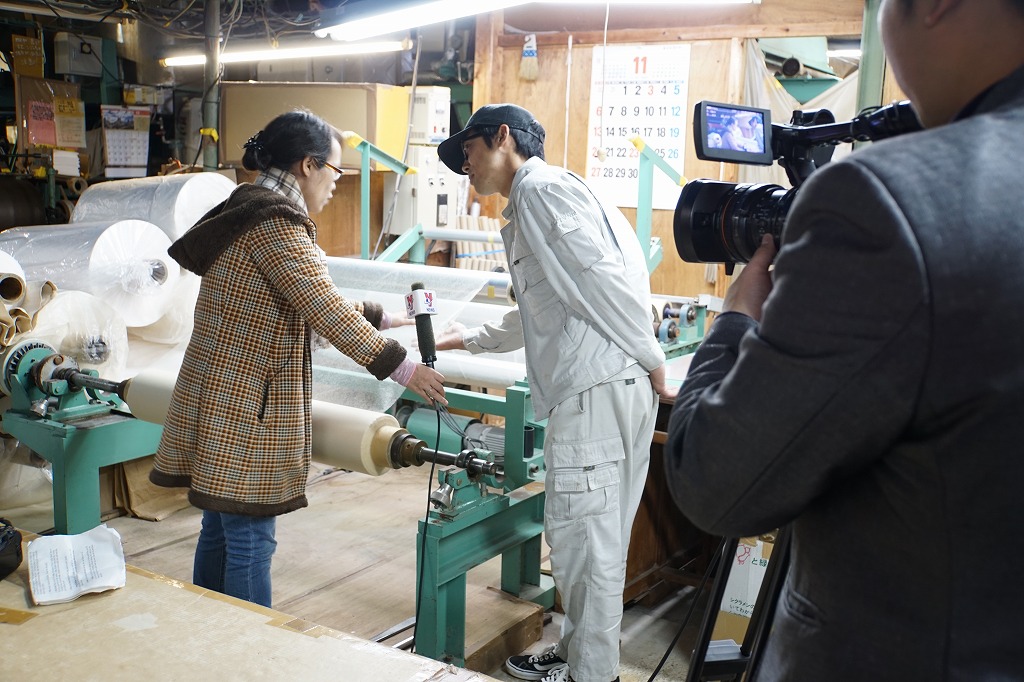 The tour then visited Hidaka Washi, a company that has gained attention around the world for developing 0.02-millimeter-thick washi (Japanese paper), the thinnest in the world, that is used for repairing artwork and antique texts. Company president Mr. Hiroyoshi Chinzei started by explaining the unique characteristics of the 0.02 mm washi and how it is used for repairs. The journalists asked questions such as what made washi better than Western or other Asian papers for repairing artwork, and whether there were any issues using washi to repair works that were originally made with other materials. Mr. Chinzei explained that their washi is made with 100% natural materials and is very durable, making it suitable for repairing artwork and antique texts. He also mentioned how he would like to organize workshops to train people in using washi to repair Cultural Properties, and that he would like to work together with experts both in Japan and around the world. The journalists then had the chance to see how washi is made. 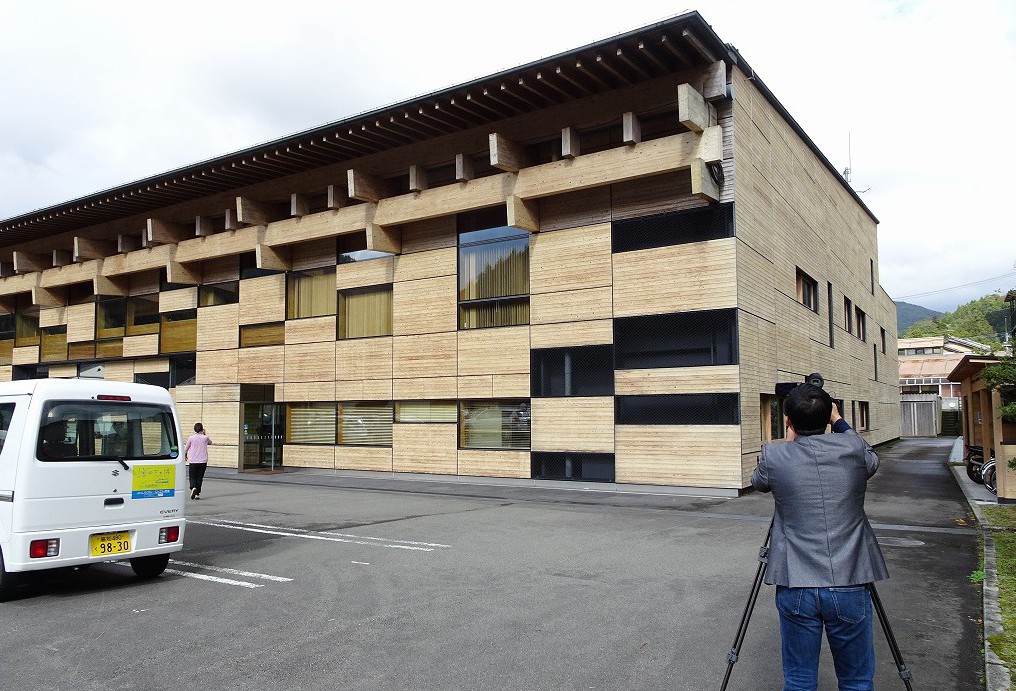 After arriving at Yusuhara Town Hall, the journalists heard from town officials about policies to encourage people to relocate to the town using vacant homes, using renewable energy, and the structures designed by architect Mr. Kengo Kuma which have become a unique feature of the town. There were many questions about policies to encourage relocation to Yusuhara, such as a system allowing people that relocated to use vacant homes renovated by the town for up to ten years. The group then filmed and photographed the town hall, which had been designed by Mr. Kengo Kuma. 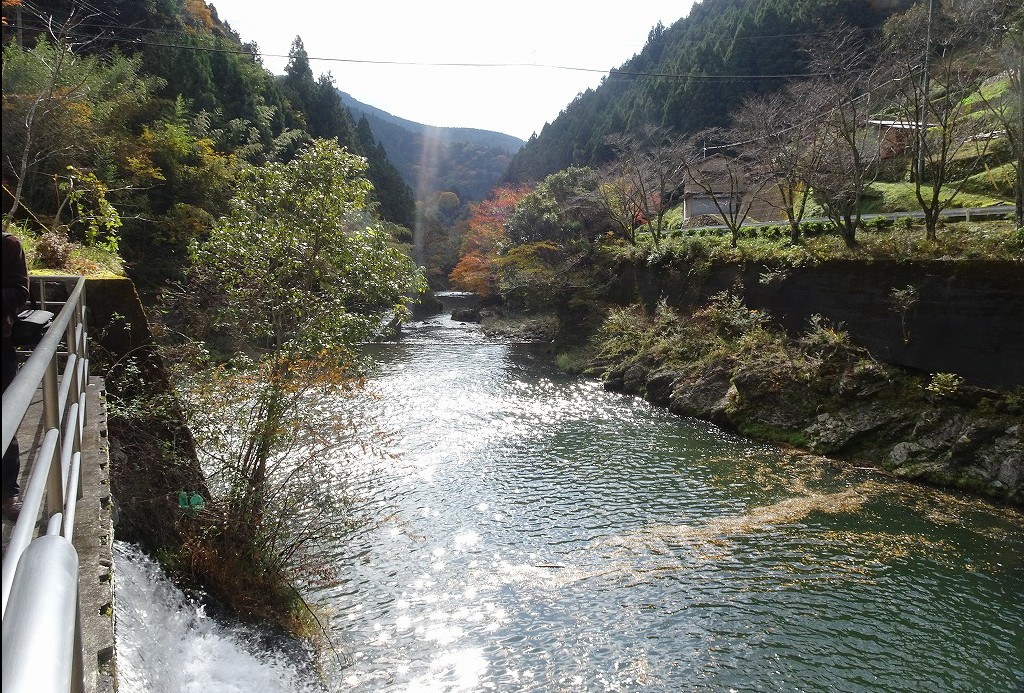 To cover how renewable energy is being used for community development, the journalists spoke went with Mr. Yuichiro Sogame of the town’s Environmental Model City Promotion Office to see a micro hydroelectric generator that provides energy for the elementary and junior high school, and streetlights. The micro hydroelectric generator, which preserves the natural beauty in the environment while using a six-meter drop in the river to generate power, is an impressive site, and the journalists took a number of photos and videos, including filming a TV report there. Chairman Shinji Moriyama of the Yusuhara Forestry Cooperative guided the group around the wood pellet plant, showing the process for making wood pellet fuel from leftover wood from cut lumber and other unused wood. Journalists filmed and photographed the manufacturing process, and asked questions about the annual production capacity of the plant and the what percentage of energy used in Yusuhara came from renewable energy. 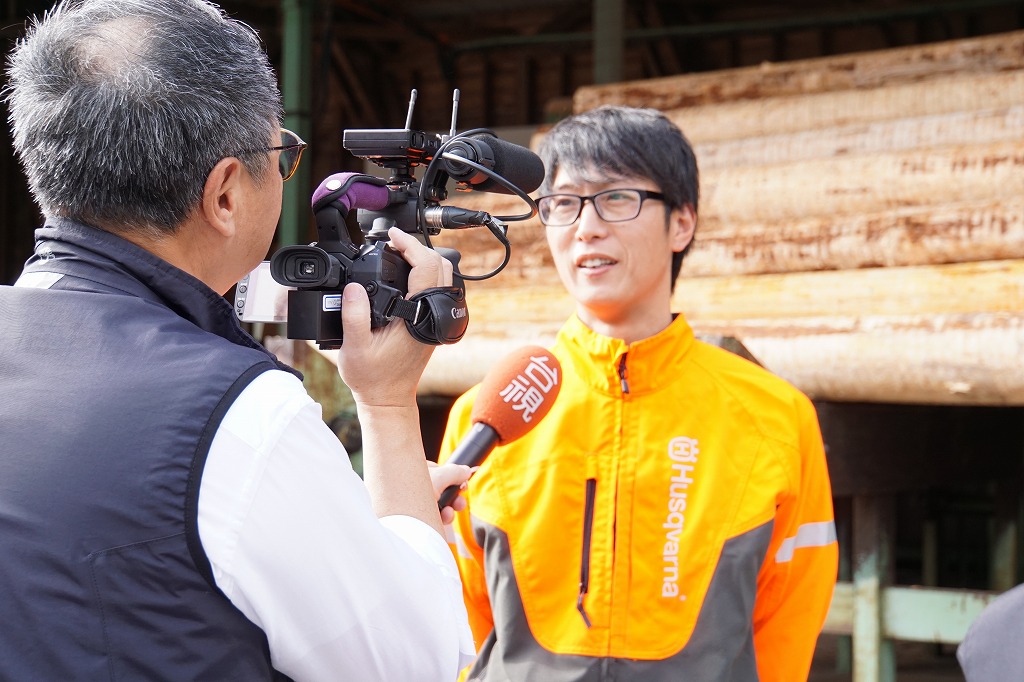 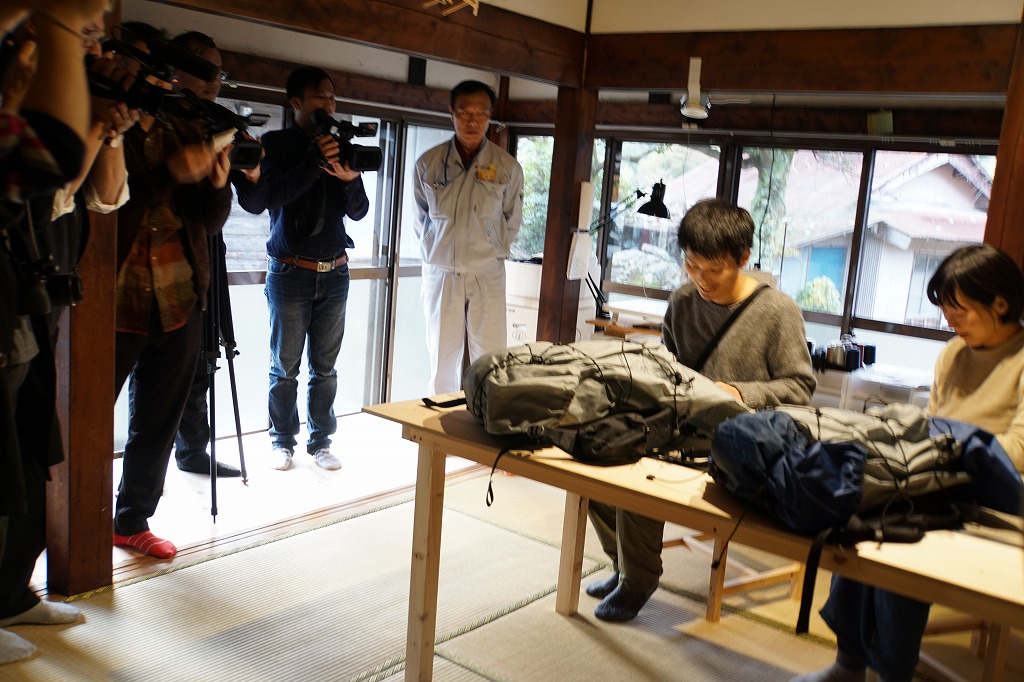 Interviewing People Who Relocated to Yusuhara

Mr. Kosaku Kataoka, the Yusuhara Permanent Relocation Coordinator, joined the group as they interviewed people who had moved to Yusuhara using the town’s relocation support: Mr. Sohei Ueda, Mr. Taichiro Omura, and Mr. Takashi and Ms. Mariko Yamaguchi. The interviews with Mr. Omura and the Yamaguchis were held in their homes provided by Yusuhara Town to support relocation, and they spoke about their reasons for moving to Yusuhara and what their lives are like now. The Yamaguchis run “If you have,” a small business making outdoor goods, and when asked if living in a rural area made it more inconvenient to ship their products and have them placed in stores than in a big city, Mr. Yamaguchi replied that it was not a problem, thanks to a flat national rate for shipping and the availability of the internet. The interviews went well, with the journalists asking about what work each interviewee did, how their working style and lifestyle changed after moving to Yusuhara, and whether they had any issues fitting in to the community.