This press tour visited Cultural Properties that tell the history of Takaoka, designated as Japan Heritage by the Agency for Cultural Affairs, as well as metal casting artisans and companies gaining attention from both within Japan and overseas due to developing new products using traditional techniques. Eight journalists participated in this press tour, from China, Denmark, Germany, Hong Kong, Italy, South Korea, and Taiwan.

The journalists visited Zuiryuji Temple, and heard from head priest Doko Yotsuya about the history of how the temple was built by Maeda Toshitsune, the third head of the Maeda family which ruled the Kaga Domain. Mr. Yotsuya also explained about the butsuden (main hall) which is designated as a National Treasure, zazen training, and the temple’s pillars which are similar to Shinto shrine torii. The journalists asked questions such as why a Buddhist temple incorporated Shinto elements, whether the number of people interested in Buddhism had been decreasing in recent years, and what the Japanese view on religion was. In responding to these questions, Mr. Yotsuya explained some of the history of Buddhism in Japan, trends in worshippers visiting the temple, and what Japanese people mean by non-religious. 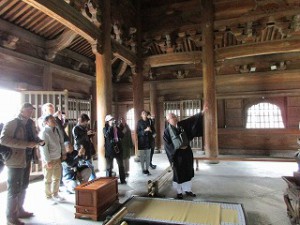 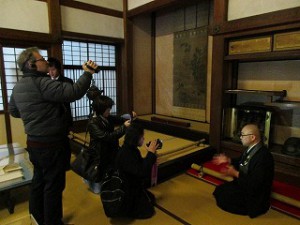 The tour visited the Takaoka Mikurumayama Museum to cover the extravagant Mikurumayama floats decorated with the traditional techniques of Takaoka. The Takaoka Mikurumayama festival is designated as both a Tangible and Intangible Important Folk-Cultural Property. The news at the time was reporting that its registration on the UNESCO List of Intangible Cultural Heritage was almost certain, so some of the journalists mentioned how they were interested in covering the next festival to be held in May. The festival’s registration on the UNESCO List Intangible Cultural Heritage was officially announced soon after the tour on December 1, 2016, making it a very timely tour. 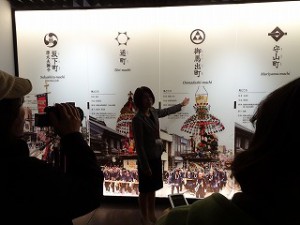 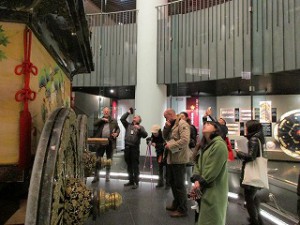 The tour visited the site of Takaoka Castle, which was constructed by Toshinaga Maeda, the second head of the Maeda family. The journalists walked around the site of the castle, with its moat remaining as it was despite the castle having been decommissioned, and received an explanation of the political situation at the time and the military value of the moat.

Next, the tour visited the Great Buddha of Takaoka, one of Japan’s “Three Great Buddhas,” and the journalists took many photos at what is also one of Takaoka’s main tourist attractions. 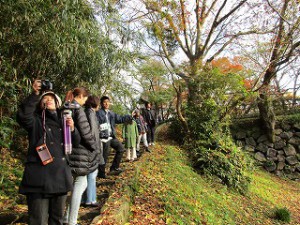 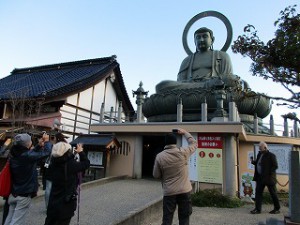 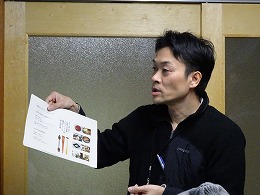 The first stop to cover cast metal artisans working to revolutionize traditional industries was Momentum Factory Orii. Mr. Toru Hino of the Takaoka Design & Craft Center first explained about the training school that the city started 48 years ago to pass on traditional crafting techniques, and the subsidy system. The journalists asked about how successful the school has been, how it could improve, and details of the subsidy system.

The journalists then heard from Orii’s president, Mr. Koji Orii, about how he shifted the family business from specializing in subcontracting to color metals for products such as Buddhist altar objects and vases, to also manufacturing and selling original products. The journalists also filmed and photographed the factory, and showed surprise at the detailed work required for traditional Japanese coloring techniques such as nukayaki and ohaguro. Mr. Orii has created products using new colors developed from traditional techniques for interior goods and construction materials. The journalists asked questions about exporting to the European market, and how much sales had increased. 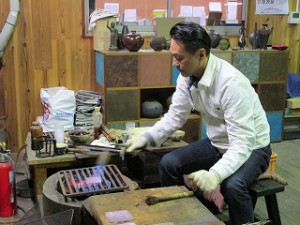 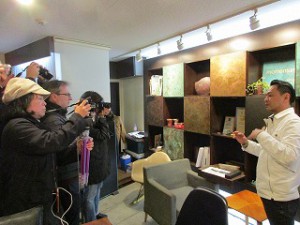 At the Fushiki Kitamaebune Museum, visitors can learn about the history of how the town of Takaoka prospered due to trade from the Kitamaebune shipping route. The tour heard from Mr. Tadashi Kami about shipping routes and ships, and about the Akimoto family, which ran a prosperous shipping agency. Some of the journalists had never heard of the Kitamaebune before, and showed significant interest in the materials on display. Journalists also took photographs from the lookout tower that had been used to check for ships coming into the harbor. 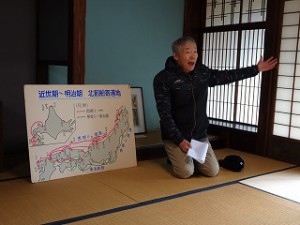 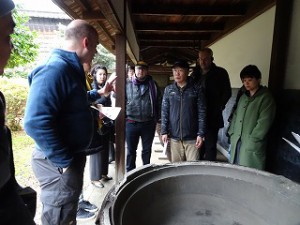 At Futagami, a company that casts objects from brass, the journalists heard from the fourth-generation owner Mr. Toshihiro Futagami about how the company went from making rinto, a kind of decorative lantern for Buddhist altars, to making daily goods under a new Futagami brand. Upon hearing that sales have been increasing and the company has expanded to overseas sales as well, a journalist asked whether the company would begin mass production. Mr. Futagami replied, “There is no sense of added value from mass production, and I would like our products to be used by people who understand the value of handmade products,” and explained the benefits of their products which can only be made by hand. The journalists filmed and photographed the process of making a mold for casting, making rinto, and applying the finishing touches, and also interviewed young artisans. 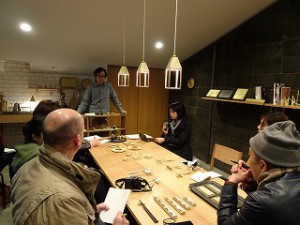 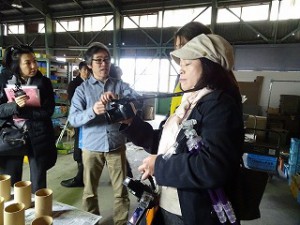 The tour had lunch at Nikoka, a café in a converted traditional building that originally sold cast metal goods, located in Kanaya-machi, the original cast metal industry district of Takaoka. Mayor Masaki Takahashi spoke about the attractions of Takaoka. Ms. Masako Otera, the owner of Otera-Kohachiro-Shoten, a gallery run out of her home to display and sell products by local companies and artisans, spoke about the history of Kanaya-machi. 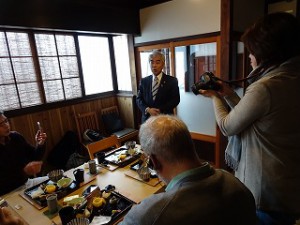 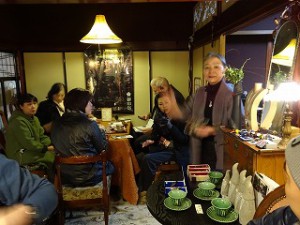 Nousaku was one of the first companies to move from subcontracting (casting objects for Buddhist altars and tea ceremony) to making its own products. Ms. Chiharu Nousaku, daughter of the fourth-generation owner of the company, explained the company’s hundred years of history, and about the company’s products using the flexible properties of tin for interior goods and medical instruments. The journalists were extremely interested in Nousaku’s industrial tourism business, showing visitors how cast metal objects are made using Takaoka’s traditional techniques. The reporter from Italy also interviewed Ms. Marta Rinaudo, a worker hired in April 2016 who was also from Italy. 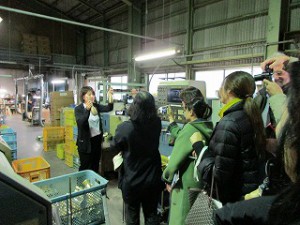 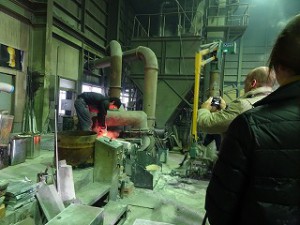 Mr. Yoshinori Shimatani explained and demonstrated the process of making rin (singing bowls), a type of bell placed on Buddhist altars that was developed in Japan. Asked whether there were many orders for rin, Mr. Shimatani replied that since the same one could be used for a hundred years, there were not that many orders for them. He explained that with orders for rin decreasing, he developed the new product Suzugami, tin plates that can be folded and bent easily. He demonstrated how Suzugami was finished using the hammering techniques he had perfected by making rin. When asked by a journalist whether he felt threatened by new technologies such as 3D printing, which could make it possible to easily mass produce similar products, Mr. Shimatani replied that “People can determine whether something was made by hand or not, and I am confident that the warmth of a handmade product will enable me to win against 3D printing.” 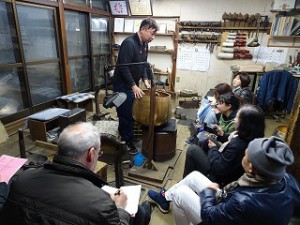 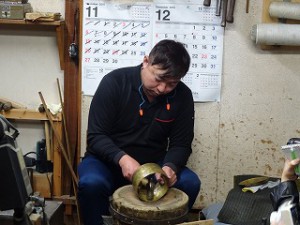