Hosted by the Government of Japan Cabinet office with the support of the World Economic Forum, Cyber3 Conference Okinawa 2015 was held in Okinawa on Saturday, November 7 and Sunday, November 8. This international conference had approximately 350 participants from 35 countries and regions, and discussed the three topics of Cyber Connection, Cyber Security, and Cybercrime. Lively debate occurred at the conference, with attendees such as Taro Kono, Chairperson of the National Public Safety Commission; Noboru Nakatani, Executive Director of the INTERPOL Global Complex for Innovation (IGCI); security officials from countries around the world; and CEOs in charge of security of communications giants such as Nokia and BT. 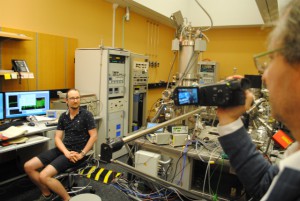 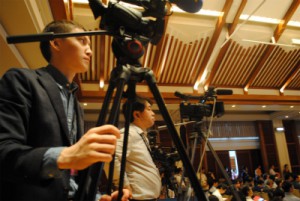 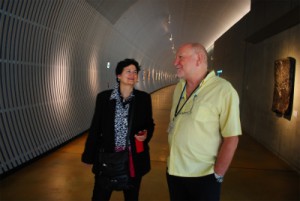 The FPCJ held a press tour to cover this conference and visit the Okinawa Institute of Science Technology Graduate University (OIST). The tour ran from Friday, November 6 to Sunday, November 8, and had three participants: an East Asia correspondent for an Italian economics newspaper, a cameraman from Kazakhstan’s national TV station, and an American freelance journalist.

*News reports based on this press tour can be seen from the links below.

“Japan’s future is an OISTer”

“The most international university in Japan” (provisional translation)

“Japan, preparing to deal with threats for the 2020 Tokyo Olympics” (provisional translation)

Among the Most Internationalized Education and Research in Japan 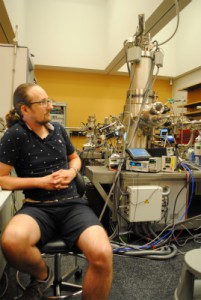 Founded five years ago, OIST aims to be the “best in the world” for research, and has researchers and students from over 40 countries. Education and research at the school is conducted in English, in a campus surrounded by nature. The tour heard an explanation of OIST from its Vice President for Communication and Public Relations, Neil Calder.

Next, in the OIST’s cafeteria, which is also open to the public, the participating journalists interviewed researchers, students and employees from the same countries as them (Italy, Kazakhstan, the USA). The tour then listened to a briefing by Acting President Albrecht Wagner and Executive Vice President Robert Baughman about: 1) The successes of OIST now that five years have passed since its founding (including the recent drastic increase in the number of patent applications), 2) Its environment that makes it possible to focus on research (support is provided for living costs, healthcare, housing, and childcare), and 3) How it is one of the most international institutions in Japan (OIST has the highest percentage of foreign instructors, students, and researchers). An Okinawa Prefecture official then presented the IT industry promotion policy that is directly related to the sustainable development of Okinawa.

While visiting research labs, the tour heard directly from researchers such as Assistant Professor Yabing Qi about his work developing inexpensive solar cells that can be installed anywhere, and Professor Ulf Skoglund, who has created OIST’s first venture company to contribute to developing new medicines.

The first day of the conference opened with a video message by Prime Minister Abe, and the tour focused on covering the Cyber Security track. The conference began with several recent examples from Japan of information being leaked by cyberattacks. To help with preparations for the 2020 Tokyo Olympics and Paralympics, BT Security CEO Mark Hughes shared how British Telecommunications supported the technical side of preparations for the 2012 London Olympics and Paralympics. 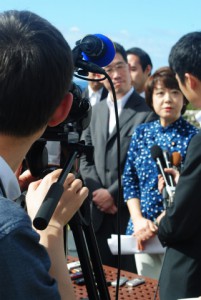 The second day of the conference, the tour focused on covering the Cyber Connection track, chaired by Toshiyuki Shiga, Vice-Chairman of Nissan Motor Corporation. Autonomous cars were used as a concrete example of the Internet of Things, physical objects that can connect to the internet. The discussion dealt with how IT companies such as Google and Apple are entering this market instead of companies that traditionally made automobiles, and who will be held legally responsible when an accident occurs involving an autonomous vehicle. After the closing speech of the conference, Kazakhstan’s national TV station reporter was the only member of the foreign press to participate in an impromptu press conference with Minister Aiko Shimajiri (Minister of State for Okinawa and Northern Territories Affairs, Minister in charge of Information Technology Policy, Minister in charge of “Cool Japan” Strategy). They shot footage of Ms. Shimajiri providing comments that summarized the two-day conference, mentioning Japanese cyber terrorism countermeasures for the 2020 Tokyo Olympics and Paralympics and the 2016 G7 Ise-Shima Summit.