Chiba Prefecture has many engineering universities, research institutes and SMEs in industries supporting cutting-edge technology. The prefecture is bridging the gap between different universities, laboratories and companies so that they can benefit from each other’s technology or craftsmanship. This press tour was sponsored by Chiba Prefecture with planning and project support from the FPCJ, and visited Fasotec Co., Ltd. and the Chiba Institute of Technology to look at cutting-edge technology from Chiba. Fifteen journalists participated in the tour, from Taiwan, South Korea, Russia, Italy, France, Denmark and Germany. (Click here for tour details) 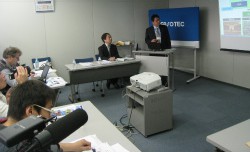 The tour started with Mr. Toshiyuki Takahashi, head of the Chiba Prefecture Industrial Promotion Division, explaining technology promotion initiatives in the prefecture. Mr. Takahashi explained how products made as a result of collaborations between universities and companies that the prefecture had matched with each other are being used in the medical field and for disaster rescue, and explained their goal of expanding overseas as well. “As populations around the world continue ageing, the medical instrument industry is expected to expand significantly, particularly in Asia.”

Next, Mr. Tomohiro Kinoshita, in charge of business promotion at Fasotec Co., Ltd., gave an overview of the company and the 3D organ models (photo, left). Fasotec develops products to provide realistic, 3D organ models for the medical industry. As Mr. Kinoshita explained, “By using organ models, it is possible to improve safety by reconfirming the position of a tumor before operating, and by using the model in explanations to patients it can make them feel more assured. With the new Wet Model, the texture and blood vessels of organs can be replicated as well, making it possible for surgeons to practice and perform simulated surgeries before the actual one.” The journalists touched the Wet Model, and were impressed at how real it felt (photo, right). In response to a journalist asking whether they would export this technology to Western countries, Mr. Kinoshita replied that first they were planning on expanding to Asia, where people had similar body types to people in Japan. 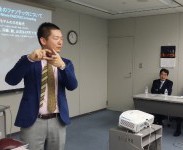 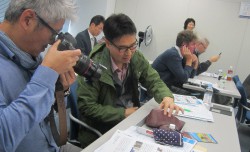 The journalists then saw demonstrations of converting 2D data of organs from CT and MRI scans for use in 3D printers (photo, left), and of using 3D printers to make organ models (photo, right). During the data conversion, the areas to be replicated, the colors and texture are all set according to request. Based on this data, different types of resin are then used with the 3D printer for different colors and textures. The journalists asked for comments from doctors that had actually used the organ models, as well as asking multiple questions about expanding overseas. It was clear that due to the company having developed such a unique product, the journalists were interested in what Fasotec would do in the future. 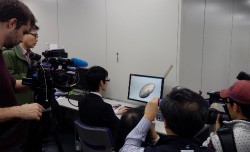 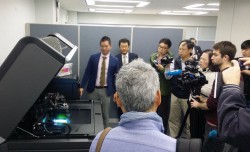 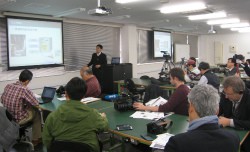 Next, the tour travelled by bus to the Chiba Institute of Technology to learn about a robot used inside the reactor at Fukushima Daiichi Nuclear Power Plant. Senior Researcher Tomoaki Yoshida explained what led to developing a robot that could withstand the interior of the reactor. After the earthquake in March 2011, Tokyo Electric Power requested the disaster rescue robot Quince be used to measure radiation levels within the reactor and take pictures of the interior. Dr. Yoshida explained the biggest difficulty at the time was “not knowing what the conditions were inside.” He also explained how Quince was modified to handle debris, narrow staircases and high temperatures, and how the newer Rosemary and Sakura No. 1 and No. 2 robots were developed later. Journalists asked questions such as how long the robots could last after being charged, what percentage of components used in them were made in Japan, and what company had made the motors used.

The tour then filmed and photographed demonstrations of Sakura No. 1 and No. 2, the newest models, being operated in a replica of the interior of the nuclear reactor. The journalists followed closely with their cameras as the robots skillfully navigated up and down stairs (photo, left). Researcher Takeshi Nishimura, who operated the robots for the demonstration, explained how to control the robots and read the computer display (photo, center). There was even a reporter who operated a robot while giving a report on camera. After interviewing Dr. Yoshida and Mr. Nishimura individually, the journalists mentioned they were satisfied with the amount of coverage they had been able to get. 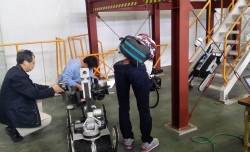 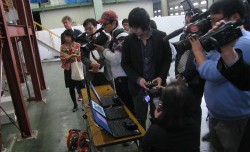 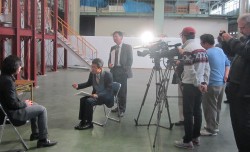