Report: Yokohama Press Tour “Behind the Scenes of Disaster Rescue Initiatives in the Birthplace of Rescue Teams in Japan”

This press tour was sponsored by Yokohama City, with planning cooperation by the FPCJ. Four journalists participated, from China, Indonesia, Switzerland and Italy. The tour covered initiatives of the Yokohama City Fire Bureau, the first city in Japan to establish rescue teams and introduce call triage. (Click here for information on the tour.) 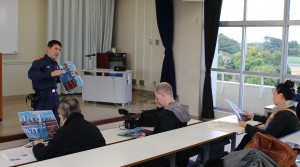 The tour first went to the Firefighting Training Center, where Yokohama City Fire Bureau Division Chief Hideya Abe gave an overview of the Fire Bureau. In addition to providing basic data on Yokohama City and the Fire Bureau, he also explained various disaster prevention initiatives in the city such as community training, building inspections and investigating the causes of fires.

Next, Captain Eikichi Sakuma of the Special Advanced Rescue Team (Super Rangers (SR)) guided the journalists on a tour of their equipment, training and specialized vehicles. When explaining the equipment, he also described what it was like working to cool down the Fukushima Daiichi nuclear reactor, using hazmat suits and radiation counters. The journalists asked a variety of questions about changes to equipment since the Great East Japan Earthquake and details about the tasks carried out. 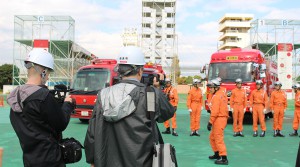 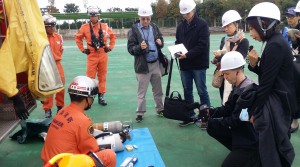 Next, SR members demonstrated two types of training. The first drill involved using ropes to rescue someone stranded on a sandbar in a river. The second drill involved using equipment to clear debris while searching for survivors in the event of an earthquake. After filming the training close-up, the journalists asked questions about the requirements to become a SR or international search and rescue team member, how robots were used during disasters, and whether they participated in rescue efforts after the 2008 Sichuan earthquake. Some SR members have also been selected to go overseas as part of an international search and rescue team. 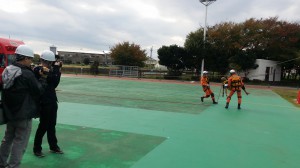 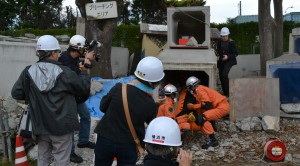 After lunch, the tour went to the Fire Command Center to learn about Yokohama City’s unique call triage initiative. Patrol Department Command and Orders Division Chief Takashi Ota explained the call triage system and reasons for its adoption using PowerPoint. Next, the journalists entered the dispatch room to view a demonstration of a dispatcher taking an emergency 119 call and using the triage classification system. One of the monitors had a list of set phrases in Chinese, Korean, English, German and other languages for providing simple instructions in the case of foreign language emergency calls. The journalists were very interested, and asked questions about how the dispatch center handled calls by foreigners. 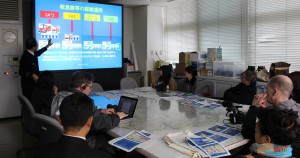 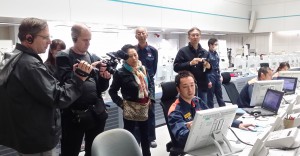 The tour concluded with a visit to Midori Fire Department, which just opened in August and was designed to create an environment easy to work in. After listening to an explanation by Chief Sekiguchi of Midori Fire Department, the journalists went to the rooftop to view rope traversal training. The journalists were impressed by the rapid pace at which firefighters crossed the ropes. The tour also viewed the kitchen, bedroom, bathroom and training rooms available so that firefighters can be on standby 24 hours a day. The journalists then asked questions about cooking dinner and the frequency of night shifts. A dispatch drill was also held, demonstrating how quickly the fire vehicles leave after the siren sounds. A female member also participated in the drill, and the journalists asked in detail about her joining the fire department and what kind of work she performed. 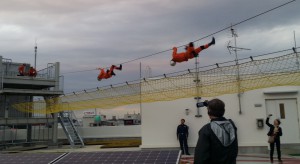 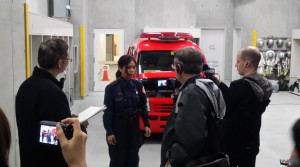