Notice: Yokohama Press Tour “Behind the Scenes of Disaster Rescue Initiatives in the Birthplace of Rescue Teams in Japan” 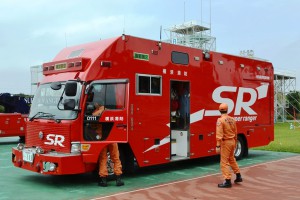 Natural disasters are always present in Japan, as evidenced by the Great East Japan Earthquake, Hiroshima landslides, the eruption of Mt. Ontake, and landfall of major typhoons.

Rescue teams in Japan began with the 1964 establishment of the Yokohama Rangers in Yokohama City. With the rapidly changing urban landscape due to post-war development, an increased necessity of rescue operations for a variety of accidents was predicted, and so Yokohama City sent fire department members to a Japan Ground Self-Defense Force school to provide them with “ranger training,” which is known to be very hard. In particular, the elite Super Ranger team uses specialized vehicles and equipment to respond to large-scale disasters. Their activities are not limited to Yokohama: they participated in rescue operations after the Great East Japan Earthquake, were dispatched to the site of the Fukushima Daichi accident, and have also gone overseas as part of international emergency rescue efforts.

According to the UN classification of international search and rescue teams, Japan is classified as a Heavy Team, the highest rank. 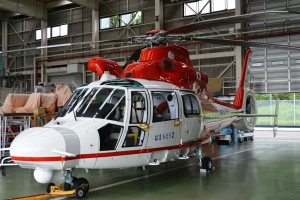 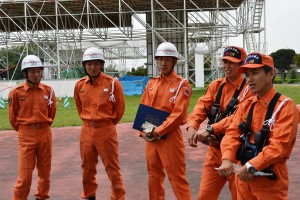 This press tour will visit Yokohama, where the first Japanese rescue team was established, and cover the various types of training that help team members maintain their advanced rescue skills. Yokohama is also the first municiparity  in Japan to implement call triage (triage=determining severity/urgency of patients). This press tour will cover initiatives such as these that make Yokohama City a leader in Japan when it comes to preparation for large-scale disasters and accidents.

*This press tour is sponsored by Yokohama City, with planning cooperation provided by the FPCJ.

*Participants will have to cover part of the cost of this press tour, but it is not a profit-making enterprise. 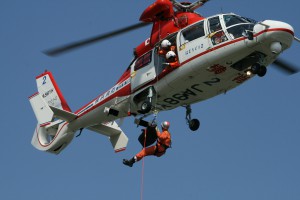 The Yokohama City Fire Department Air Corps has two helicopters, Hamachidori 1 (from an Italian manufacturer) and Hamachidori 2 (French manufacturer). When disasters occur, these helicopters are flown to the scene to participate in rescue efforts, transporting emergency patients, firefighting or gathering information. The helicopters are also dispatched to large-scale disasters outside Yokohama, such as the 1995 Great Hanshin Earthquake, 2004 Niigata Chuetsu Earthquake, the 2011 Great East Japan Earthquake, and the 2013 landslide in Izu Oshima. 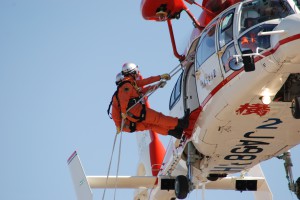 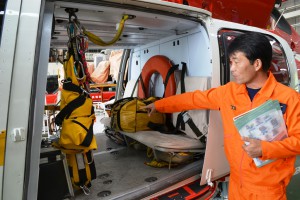 ◎The tour will visit Yokohama Heliport, the base of operations for the Yokohama City Fire Department Air Corps. After observing/photographing aerial rescue training (hoisting, rappelling) using one of the Hamachidori firefighting helicopters, interviews will be held with the pilots and other firefighters.

*If a disaster or accident occurs during the tour, it may not be possible to cover the helicopter training if the Hamachidori is part of the response

*Tour coverage will be of the Hamachidori 2 (the older model). The new model Hamachidori 1 is undergoing a periodic maintenance check at a factory.

An elite team that helped after the Great East Japan Earthquake 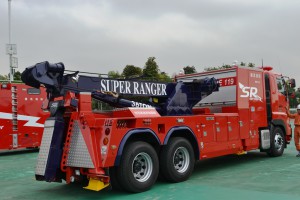 The Special Advanced Rescue Team, known as the Super Rangers, was created in 2008 to fulfill a general role during major disasters and to respond to special disasters including NBC (nuclear, biological, chemical) disasters. The Yokohama Rangers* Special Rescue Team, created in 1964 as the first specialized rescue team in Japan, selects its members from the top firefighters in the city. Super Rangers members are then chosen from the Yokohama Rangers, making them the best of the best. Requirements to become a Super Ranger include experience in the Yokohama Rangers and passing special training. Members have ample experience in and knowledge of search and rescue, in addition to their physical and mental fortitude. After the Great East Japan Earthquake on March 11, 2011, they participated in search and rescue efforts in Sendai, Miyagi and also arrived in Fukushima on March 22 to spray water to cool down the Fukushima Daiichi Unit 3 Reactor. 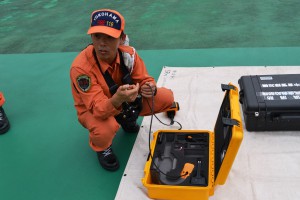 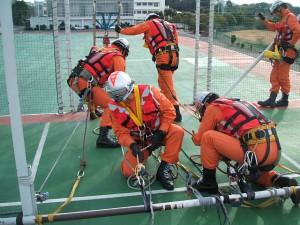 ◎The tour will first hear an overview of the Super Rangers and their activities (including search and rescue efforts after the Great East Japan Earthquake) from team leader Eikichi Sakuma. Then the tour will observe/photograph the Super Rangers specialized vehicles and equipment, and training for rescuing people trapped on sandbars or in rubble.

*If a disaster or accident occurs during the tour, it may not be possible to cover the special vehicles if they are part of the response. 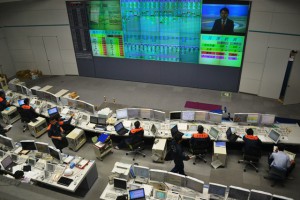 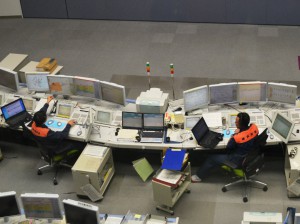 In this situation, Yokohama started using call triage (a program to determine severity/urgency) in 2008 as the basis for their emergency system. Triage determines the severity and urgency of patient conditions, and ranks them to prioritize their transportation and treatment. Normally, triage is performed on site, but Yokohama City has developed a system where upon receiving an emergency call, an emergency dispatcher with specialized knowledge and skills will classify the urgency and severity of the patient using five ranks, and dispatch an appropriate emergency response team. In cases of limited severity or urgency, smaller teams are dispatched. In cases of great severity or urgency, large rescure teams including emergency medcal technicians and firefighters are dispatched immediately. Since introducing this system, average response times to severe or urgent cases in Yokohama City are now almost one minute faster than the general response time.

◎The tour will visit the Yokohama City Fire Department Command Center and listen to an overview of call triage in the Yokohama emergency system, before observing dispatchers actually using the system.

Base of operations for firefighters standing by for dispatch 24/7

The Midori Fire Department (Midori-ku, Yokohama)  just moved to a new building in August of this year. In addition to offices, sleeping quarters, a kitchen and shower room, the building also has search and rescue training facilities. While the firefighters stay on standby to move out at any time, they also train daily to improve their rescue skills and their physical condition, through fighrefithing and rescue operaion drills and weight training. When the order comes for dispatch, firefighters can change in to their gear and leave in the fire engine in just one minute.

According to the city’s Fire Department, in addition to this daily training, “Instructing local communities about disaster-management measueres, instructing businesses about firefighting equipment, carrying out periodic inspections, and cooperating with volunteer firefighting brigades are all part of the unique Japanese attention to detail in fire prevention initiatives, creating a safe and secure society.”

(2) Yokohama City and FPCJ will not be liable for any inconvenience, trouble or accident that might occur during the tour.