In Akita Prefecture, many traditional arts and customs have been passed down through the generations and still exist to this day. At the same time, Akita is faced with population decline. The FPCJ held a press tour sponsored by Akita Prefecture that covered the passing on of unique local culture in Akita, and initiatives to deal with population decline and an aging population. This press tour had a total of ten participants from Taiwan, China, Bangladesh, Germany, Switzerland, Denmark, and Brazil. (Click here for information on the tour.)

Population decline and an aging population, issues occurring across Japan, are affecting Kamikoani as well. During the wave of municipal mergers in 2005, Kamikoani chose to remain independent. Its current population is 2,600. Mayor Yoshiho Nakata described the history and unique features of the village while explaining the background and goal of the Kamikoani Project Akita art event, now in its third year. Dr. Masaya Shibayama, an associate professor at the Akita University of Art and director of the Project, said “When visitors and artists appreciate things that people in the village just accepted as normal, it can lead to new discoveries for the villagers as well.” The tour also spoke with members of the Kamikoani Women’s Society, who opened a café serving curry made with local zucchinis, at a location for the event that had no restaurants (Yagisawa). Women’s Society President Etsuko Takeishi mentioned how they had to be careful with hygiene, but they were motivated by visitors encouraging them to continue. Journalists asked questions about the impact of the art event and plans for industrial promotion to encourage young people to stay. 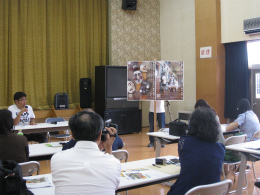 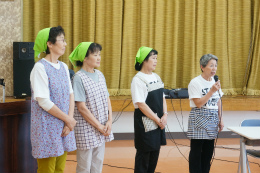 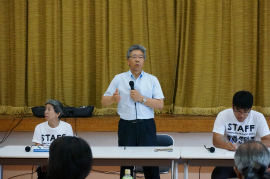 The tour visited Okitaomote Elementary School, which was left empty for seven years due to being shut down. The school was opened for use by the Kamikoani Project Akita as a workplace and gallery for artists staying in the village. Dr. Shibayama showed the journalists around, and they interviewed Ms. Nozomi Tanaka, Mr. Yasunori Kinukawa and Ms. Chen Yijia, who as resident artists were staying in the village while working on their art. The journalists asked the artists questions such as whether they learned anything from making art in Kamikoani and if it influenced their art in any way, as well as other questions about how they felt about Kamikoani and how they were expressing those feelings through their art. Mr. Kinukawa, who is from Kyoto and was participating in the event for the second time, commented that “After speaking with the villagers, my perception of the scenery in the village changed.” 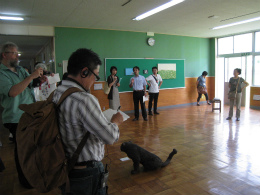 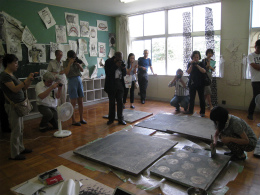 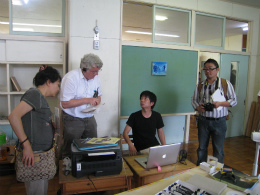 The traditional performing art of Yagisawa bangaku was passed down in Yagisawa, but died out 20 years ago due to a lack of successors to carry out performances. Although the population of Yagisawa is said to have once been as high as 200, now it has declined to only 16 people living in 9 households. But with the help of Mr. Soichiro Mizuhara and Mr. Sugihito Masumoto, who came to the village as part of the Regional Development Cooperation Group, bangaku was taught to local elementary and junior high school students, leading to its revival in 2010.

Mr. Toshio Sato, chairman of the Yagisawa Bangaku Preservation Society, remembers a time when bangaku was performed frequently. He remarked that with school festivals, local events and the Kamikoani Project Akita, there were increased opportunities to perform bangaku. Journalists asked about whether he forgot how to perform bangaku in the 20 years it was not performed, and whether only men performed bangaku in the past. Elementary and junior high school students from the village then put on a bangaku performance together with members of the Preservation Society. The dances performed were “Tsuyuharai,” “Kurama,” and “Soga Brothers.” Expressions of surprise and delight could be seen on the faces of the journalists as they trained their cameras and microphones on this impressive display. After the performance, journalists asked the student performers a variety of questions, about their reasons for performing bangaku, whether they enjoyed it, and whether they wanted to stay in the village when they grew up. One journalist mentioned “That was a splendid performance, so I hope they are still performing even when they are 50 years old.” Afterwards, the journalists enjoyed some juice made using local lantern fruit. 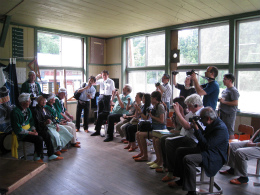 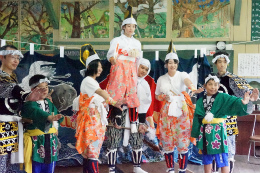 As one of the locations for the Kamikoani Project Akita, various outdoor art installations are located in Yagisawa. Amid the verdant scenery and fresh air of Kamikoani, the journalists viewed art that used motifs unique to the village, with abandoned houses and wooden frames for drying rice transformed into works of art in the paddy fields. 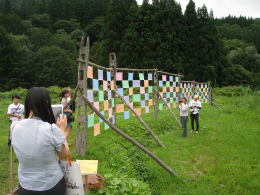 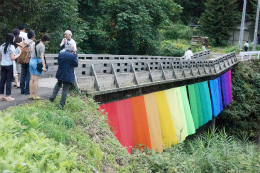 Due to changes in diet and a lack of successors, the number of producers of shottsuru, a fish sauce made in Akita, steadily decreased. Mr. Hideki Moroi, president of local soy sauce maker Moroi Jouzoujo, developed a fish sauce made from 100% hatahata in order to help preserve the local food culture. The journalists visited Moroi Jouzoujo, observing hatahata pickled in barrels, its unique aroma and the process to ferment it, which takes years. Mr. Moroi spoke about the characteristics of shottsuru, how he was inspired by fish sauce being used to promote regions in Italy, and his passion for shottsuru. The journalists asked many business-related questions, such as how much shottsuru was produced and how much was selling. After trying some shottsuru on mozzarella cheese and vegetable sticks, journalists commented on how delicious it was. When told of the warm reception for the recently released shottsuru ice cream made using shottsuru powder, the journalists seemed quite surprised. 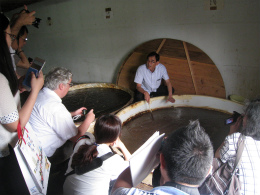 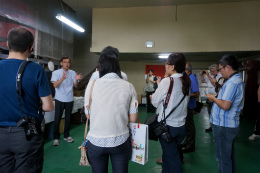 The journalists viewed the museum along with a guide providing explanations, such as four possible origins of namahage. In particular, the display of 110 namahage outfits and 150 masks gathered from 60 villages was most impressive, and the journalists enthusiastically took plenty of pictures. Questions asked included whether women could be namahage as well, and whether there were namahage in other prefectures. The tour also observed mask-maker Ms. Chiaki Ishikawa hand-carve a namahage mask. 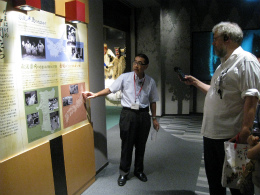 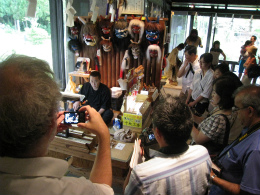 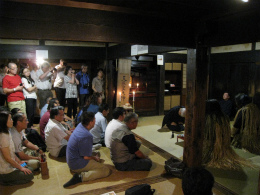 relocated, and accurate reenactments of the namahage visit at New Year are performed within. With video cameras in hand, journalists recorded the performance. The namahage questioned the head of the household severely, asking whether his children were studying and if his wife woke up early, and even stood up and loudly stomped the floor. Journalists could not hide their surprise during these scenes. 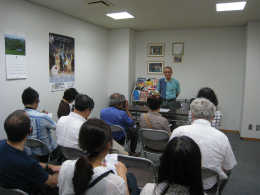 After watching the namahage reenactment at the Oga Shinzan Folklore Museum, the tour interviewed Chairman Noboru Sugawara of the Shinzan Namahage Preservation Society, which helps pass on namahage traditions in the Shinzan area. Due to reasons such as the decline in the number of children, a major issue is the lack of households for namahage to visit. Mr. Sugawara is involved in a variety of activities to help pass on the traditions, visiting elementary schools to teach children how to make namahage outfits and about the meaning behind the tradition. Journalists asked about why the number of households for namahage to visit is declining, and whether women could carry on the tradition as well. Previously, only unmarried men could dress as namahage, and after marriage they could no longer be namahage. However, with the lack of potential namahage, now married men can be namahage as well, demonstrating how the tradition is changing with the times. With this in mind, the journalists were interested in whether women would be allowed to be namahage, when in the past they were not even allowed to touch the masks. As a finale, Mr. Sugawara demonstrated the roar of a namahage and received a round of applause from the journalists.

The press tour ended with coverage of namahage taiko performed by junior high school students. Namahage taiko is a unique performance incorporating the regional symbol of namahage with dancing and Japanese drums. There are several namahage taiko groups in Oga. Oga Kita Municipal Junior High School had 280 students around 20 years ago, but now has only 37 students. Of those students, 15 are members of the namahage taiko club. The journalists seemed impressed at the students’ energetically performing and dancing as namahage on the gymnasium stage. After the performance, journalists asked the students a variety of questions such as whether they wanted to continue living in Oga and what their dreams for the future were. When one of the students said he wanted to live in Oga as a namahage taiko performer, this response was met with a round of applause by the journalists. 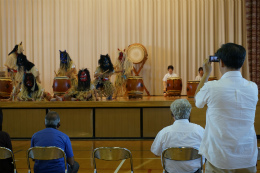 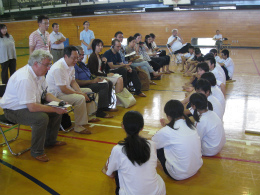