Development is progressing in Tokyo in preparation for the 2020 Olympics. At the same time, the Tokyo Metropolitan Government (TMG) is also putting into place countermeasures for a M7 earthquake, which there is an estimated 70% chance will occur within the next 30 years, and for flooding due to extreme weather in the summer. 16 journalists participated in this press tour covering Tokyo’s efforts to develop advanced disaster prevention, from South Korea, China, Taiwan, Qatar, France, the USA, Germany and Switzerland. (Click here for more details on the tour.) 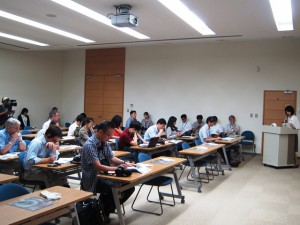 The tour started with Ms. Chikako Kobayashi, section chief of the Information Management Section of the TMG General Disaster Prevention Division, providing an overview of advanced disaster prevention initiatives in Tokyo. After explaining the unique characteristics of Tokyo and the estimated damage in the case of a major earthquake, Ms. Kobayashi explained initiatives for transportation and infrastructure improvement, countermeasures for fires/tsunamis/storm surges, and citizen volunteers during disasters, all from a perspective of self-help, mutual assistance and public help. She also explained efforts to increase cooperation with the Self-Defense Force in times of disaster, measures to deal with stranded commuters, and about using Twitter as a method to provide information. Journalists asked questions about measures to ensure the power supply during disasters, cooperation with the SDF, disaster volunteers, and measures for evacuating foreigners.

In the past, riverbanks and sewers in the Kanda River basin would often overflow during typhoons or rainstorms, causing flooding to effect roads and homes. The tour visited the underground regulating reservoir built by the TMG to help prevent this flooding. After watching a video of floods that occurred in the past, the journalists listened to an overview of the underground regulating reservoir. This was followed by an explanation using models that showed how the reservoir works, and then a visit to the central control room and the reservoir itself, 43 meters underground. There had been a rainstorm a few days previously causing the reservoir to fill with water, and the journalists took plenty of pictures of the mud and water that remained behind in the recently used tunnel. 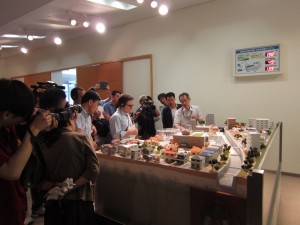 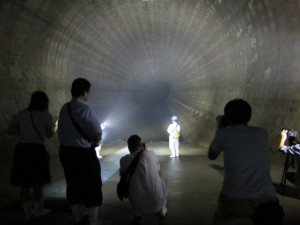 The tour visited the High Tide Management Center, which protects the Tokyo waterfront from water disasters. The Center controls facilities including floodgates, pump stations and inland locks that help prevent damage in the case of tsunamis or storm surges. After receiving an explanation of why storm surges occur, how the facilities work, countermeasures for power outages and the current state of the floodgates, the journalists went to see the Tatsumi Floodgate. Afterwards, the tour took a boat to see floodgates, levees, shipping facilities and Harumi Pier, which is the planned site for the Olympic Village. The fine weather provided some excellent photo opportunities. 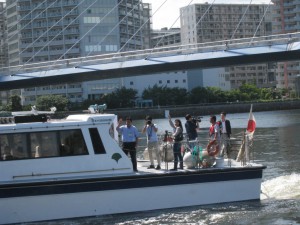 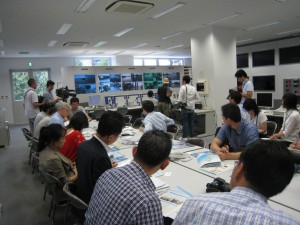 The tour visited Toranomon Hills, a skyscraper tower that opened in June this year. The building is operated by Mori Building, appointed by the city as a designated constructor for redevelopment projects. Based on the concept of “a city with places to escape to,” the company has put effort into measures to accommodate stranded commuters and business continuity plans for tenants. After an explanation by Mr. Watanabe of the Mori Building Public Relations Office about the disaster prevention measures in place at Toranomon Hills, the tour went to see the emergency rations and equipment stored underground. The journalists asked questions about the contents of the emergency rations and equipment, and took photos of them. The tour also visited the independent generator underground and the room where tenants could bring their own generators. Journalists asked questions about where stranded commuters would be sheltered, and how Toranomon Hills is different from Roppongi Hills. 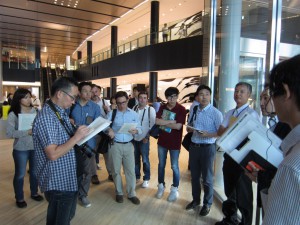 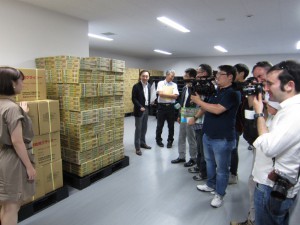