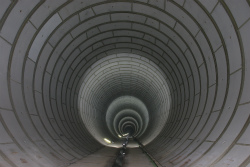 Tokyo has been selected as the host city for the 2020 Summer Olympics. In parallel with preparations for the games, development of the waterfront and central Tokyo areas is progressing at a fever pitch. At the same time, government Earthquake Research Committee has predicted “the chance of a M7 earthquake occurring in the southern Kanto region, including Tokyo, within the next 30 years is 70%,”and abnormal weather patterns in the summer have caused repeated flooding in central Tokyo, making it urgent to develop advanced disaster prevention for the city to withstand earthquakes and flooding.

During a policy speech on June 10, Tokyo Governor Yoichi Masuzoe said that “Disaster prevention is the foundation for making Tokyo the No. 1 city in the world (his stated goal),” and he stated that the comprehensive disaster prevention plan planned for this year would provide a clear outline with a target of 2020, when the Olympics and Paralympics will be held. In addition to working together with private companies for disaster prevention measures such as dealing with commuters unable to return home, the governor also plans for disaster training for earthquakes, floods and typhoons to be held by residents seasonally, four times a year. 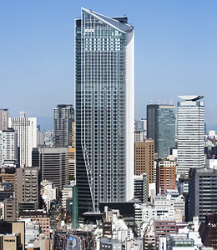 This press tour will look at efforts to develop advanced disaster prevention and turn Tokyo into the safest city in the world in time for the 2020 Olympics. In specific, the tour will visit a massive underground regulating reservoir that protects Tokyo from frequent flooding in the summer, the High Tide Management Center that protects the waterfront from tsunamis and high tide, and the disaster measures for Toranomon Hills which opened last month, as an example of cooperation between the Tokyo government and private companies to create a places to evacuate throughout the city.

※This press tour is sponsored by the Tokyo Metropolitan Government, with planning cooperation from the Foreign Press Center/Japan.

※Participants will have to cover a portion of the cost for this press tour, but it is not a profit-making enterprise. 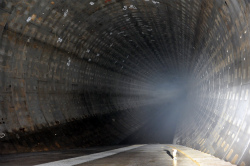 In recent years, major cities throughout the world have been facing flooding. Typhoons and concentrated rainfall overflow rivers and sewer systems in no time, causing water to flow into tightly-packed residential areas and underground. Every summer, Tokyo is also hit by frequent “guerilla rainstorms” that flood train tracks and homes. When these deluges occur, it is the regulating reservoir that helps prevent damages by floods. 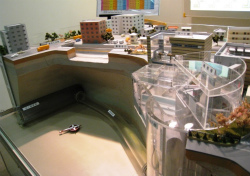 The Kanda River Underground Regulating Reservoir Under Loop Road 7 was built over the course of  about 20 years. When the water level of the river reaches a certain point due to rainfall, the water flows into a massive tunnel 4.5 km long and with a 12.5 m inside diameter, and is returned to the river after the water level has returned to normal levels. Up to 540,000 cubic meters of water can be stored. The Kanda River basin faced frequent flooding in the past, but according to the Tokyo Bureau of Construction “After this reservoir was completed, the number of houses that flooded plummeted.” Tokyo is also building other underground regulating reservoirs including one near Azabu-juban Station. Once completed, the amount of water damage is expected to decrease significantly in the central Tokyo area with its concentration of residences, office buildings, stores and subways.

*On the tour, The head of the Information Management Section of the General Disaster Prevention Division of the Tokyo Metropolitan Government will give a summary of the plan to develop disaster prevention in Tokyo. Then, the Tokyo Bureau of Construction will give an explanation of the reservoir and how it works and its effectiveness in preventing flooding, followed by visiting the central control room and the reservoir itself, 43 m underground.

-Command center protecting the waterfront from tsunamis and high tide 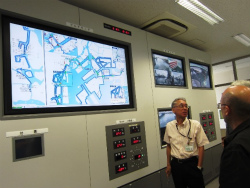 The Tokyo Bay Zone will host venues for the 2020 Olympics. The Bureau of Port and Harbor, Tokyo Metropolitan Government has taken measures to ensure the inland is not flooded, with 19 floodgates, 4 pump stations and 35 inland locks in addition to seawalls in this area. The High Tide Management Center in Tatsumi, Koto-ku, controls all these facilities. When a high tide or tsunami is predicted, the floodgates are closed by remote control with a command from the Center (If an earthquake of shindo 5-lower or more occurs, the floodgates will shut immediately without any commands from the Center). 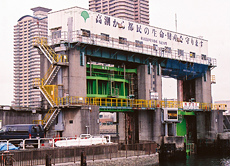 In case of a power outage, emergency power comes on; if the emergency power fails, then batteries are used; if the batteries fail, then employees rush to the site immediately and close the floodgate manually. In the future, to further improve the crisis management system, the city plans to create a second High Tide Management Center. That way, if one of the centers becomes inoperable due to a disaster, operations can still be performed by the other center. The director of the Center demonstrated his sense of duty with the comment “(With development of the bay area proceeding at a fever pitch) there is more and more for us to

*The tour will visit the High Tide Management Center, where the director will explain the waterfront disaster prevention system and the role of the center in preventing flooding. The tour will also take a boat around Tokyo Bay to take pictures of the disaster prevention facilities, such as floodgates and seawalls, which protect the waterfront with many buildings under development.

Able to hold up to 3600 stranded commuters!

Private companies working with the government to create areas for shelter. 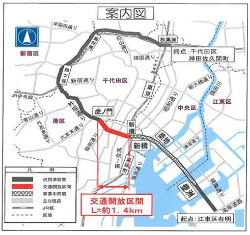 During the Tokyo Olympics, Loop Road No. 2 will be critical in linking the Athletes’ Vilage to central Tokyo. A major redevelopment project is underway in this area, with a tunnel opening between Shinbashi and Toranomon in March of this year. The aboveground part of this same section has been named Shintora-dori, with the plan “to make it into an international promenade to rival Champs-Élysées in Paris.” This area is also part of Tokyo’s Special Zone for Asian Headquarters, intended to attract foreign companies, and will be an important center for business as well as for traffic and tourism.

The 52-story, 247-meter high multi-use tower Toranomon Hills opened on June 11. The building is operated by Mori Building Co., Ltd., appointed by the city as a designated constructor for redevelopment projects. The company is working together with the Tokyo Metropolitan Government to prepare Tokyo for disasters, and has a business continuity plan (BCP) to ensure building tenants can continue their business with global markets even during a disaster. In addition to Toranomon Hills having a high level of earthquake resistance, it also has emergency generators with multiple backups in case the power supply from the electrical company is cut off.

Mori Building is also working with the city to take measures for stranded commuters during a disaster. In response to 3.52 million commuters being unable to return home after the Great East Japan Earthquake, the Metropolitan Tokyo Ordinance on Measures for Stranded Persons was made in 2012. The ordinance recommends that employers prevent employees from returning home all at once, and that they stock enough food and water for three days. Using the space in its lower levels, Toranomon Hills can accommodate around 3600 stranded commuters. The building as a whole can function as a disaster shelter, including a well in case of earthquakes and emergency stores.

*The tour will visit Toranomon Hills, which just opened last month. After an explanation of disaster management efforts including measures for stranded commuters during a disaster and its business continuity plan (BCP), the tour will see disaster prevention facilities in the building.

3. Cost: 2,000 yen per person including transportation and lunch.
* FPCJ will later inform the participants of methods for payment, cancellation fee etc.

(1) There may be some restrictions on photographing and filming at the tour sites. Please follow the instructions of the officials on duty.
(2) FPCJ and Tokyo Matropolitan Government will not be liable for any inconvenience, trouble or accident that might occur in the course of the tour.