A press tour organized by the FPCJ was held to look at new approaches being attempted as solutions for the increasing need for elderly care in Japan. 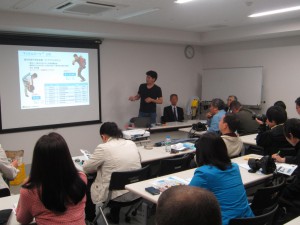 The tour visited the Katsushika Campus of the Tokyo University of Science and began by hearing from Professor Hiroshi Kobayashi, creator of the Muscle Suit. The Muscle Suit is a muscular support exoskeleton that could be useful for not just elderly care, but also in a variety of other fields where heavy lifting occurs. Not only is it easy to put on, the suit itself only weighs five kilograms. The suit is designed to reduce strain on the lower back when lifting with it equipped. Professor Kobayashi hopes to make it so no one is bedridden, and so in addition to the Muscle Suit he is also developing other devices for elderly care, such as walking assistance equipment, and explained those devices as well.

The Muscle Suit will be commercially available this fall, with Kikuchi Seisakusho helping Professor Kobayashi on the business side of things. President Isao Kikuchi of Kikuchi Seisakusho was also present, and discussed the number of units to be produced and the plan to use a new factory built in Minamisoma, Fukushima to produce the Muscle Suit. Mr. Kikuchi commented that “The elderly care and medical markets will only get bigger, so we want to actively participate in them.” 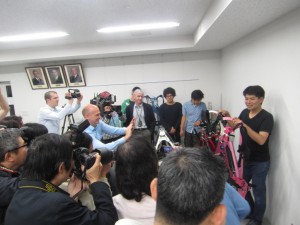 After the explanation, Professor Kobayashi demonstrated the Muscle Suit himself. 20 journalists surrounded the professor, taking pictures and filming videos. Several of the participating journalists also put on the Muscle Suit and tried picking up heavy objects. In addition to being surprised at how the Muscle Suit was much lighter than it appeared, after lifting some objects there was also the comment that “This will make work much easier.” 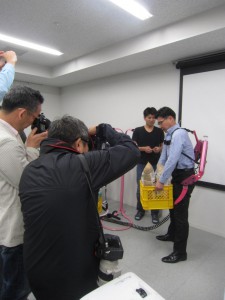 There was a wide variety of questions in the Q&A session. In response to the question of whether he had any competition, Professor Kobayashi confidently replied “Personally, I don’t think that I do. There is no other equipment that can both be worn so easily and assist in lifting 30 kg.” To the question of whether he had any plans for joint development with foreign organizations, he replied “First, there is the issue of patents. Also, since there are no other products like this I would like to study the risks carefully,” explaining his plans to focus on domestic sales and adoption first. When asked “Since the Muscle Suit is a machine, could it malfunction?” the professor replied “Although it may be a machine, it includes no motors, and is just elastic artificial muscles being moved by compressed air, so it is safe.” President Kikuchi was asked whether there had been any orders yet for the Muscle Suit. He said that 100 suits had already been delivered to a nursing care company, and also mentioned feedback he had received, saying “I’ve been told that someone who was taking time off due to pain in their lower back was able to return to work. Previously, when workers lifted people receiving care they had to put in a major effort, which made the elderly people being lifted concerned, but with the Muscle Suit it is much easier. This makes the people receiving care less worried about being dropped, so they no longer tense up.” 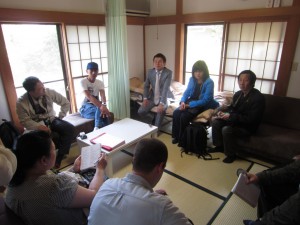 Located in Koganei, Sawahonpo Day Service FAMILY is a day service facility with a capacity of 10 clients, made using a vacant house. Soul Age Co., Ltd. operates it as a franchisee of the JC Group. What makes this facility unique is the fact that Soul Age is also an entertainment talent agency, and the care staff includes people hoping to become professional singers. After an explanation of the facility by Soul Age’s President Hirotaka Maeda, journalists asked about the merits of using a residential home. Mr. Maeda commented “By having an environment that is more like a home than a hospital, it helps reduce stress for the elderly, who have difficulty adjusting to new environments.” When asked whether they had any foreign staff, he replied “Not currently, but I would gladly hire foreign staff if the right person applied”. Afterwards, the journalists took pictures and performed interviews near a table where the elderly users of the facility were gathered. Some of the journalists even asked the users “How is it compared to other facilities?” 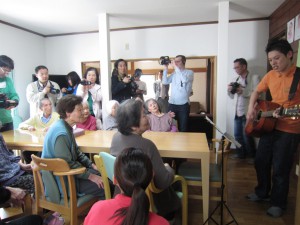 Next, the journalists interviewed Mr. Yudai Ikeda, an employee who is working towards a major debut as a singer. One journalist asked “Does your work in elderly care have a negative impact on your dream of becoming a professional singer?” Mr. Ikeda replied “Since the company is a talent agency, I have opportunities to sing in front of the users and appear in events. I was working in elderly care at a different company previously, and I didn’t feel like I was working towards my dream there.” When asked what parts of his job were fun or difficult, he happily commented “I like being able to sing in front of the users. I can’t think of any bad parts.” Afterwards, Mr. Ikeda sang “Kawa no Nagare no You ni”, with the users joining in as well, which was then followed with another song by amanote, another singer with Soul Age. 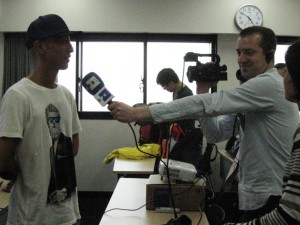 After moving to a different location, the tour interviewed Chairman Hideaki Fujita of the JC Group. Mr. Fujita explained why he started an elderly care business, the unique features of the services his company provides, and also his plan to use his company’s business model to expand overseas. In response to a question from a British journalist on whether he was considering entering the European market, Mr. Fujita replied “Not at the moment, due to how different the cultures are, but people from Sweden and Holland have come to observe our company.” When asked whether the company was profitable despite not receiving any government subsidies, Mr. Fujita said “Those subsidies are meant for building new facilities. Renovating vacant homes keeps initial investment costs quite low. We are essentially meeting our profitability goals.”