The Yokohama press tour which covered women's participation in the workforce and boosting childcare support was held hosted by Yokohama City, with FPCJ’s cooperation in planning and operation. This tour had 8 journalists from the US, the UK, Germany, Denmark, China, and Singapore. (Click here for more details on the tour) 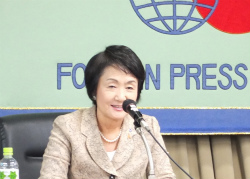 At the beginning of the tour, FPCJ invited Ms. Fumiko Hayashi, Mayor of Yokohama City, who has been leading the project to achieve the goal of zero-waiting-list, to talk about the city’s efforts for women’s participation in the workforce and boosting childcare support. In the Q&A session, reporters asked such questions as “How do you secure the tight number of qualified child-minders whose demand is increasing after the zero-waiting-list project?” “Wasn’t it difficult for the city to take the initiative on this issue as there is a national system to divide kindergarten and nursery?” The briefing was attended by a total of 22 persons, including journalists from the US, the UK, Denmark, Brazil, China, Singapore and South Korea.

2．Kana-chie, a local base for child-rearing 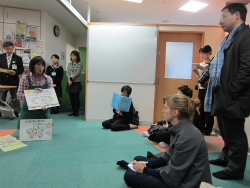 The tour participants then visited Kana-chie, a local base for child-rearing in Kanagawa ward. Ms. Izumi Tsukahara, the representative of the base, explained the role of Kana-chie as an “open salon” where parents can visit freely with their children and share daily worries with other visitors, in response to the recent weakening of family and local community support for child-rearing. The journalists interviewed nursery concierges and several mothers who were playing with their children.

The journalists then moved to the Byobugaura Harukaze Nursery situated under the highway. This is one example of Yokohama’s efforts to improve nurseries by using the limited land area of the city as effectively as possible. After shooting its unique location, the journalists received a surprise show of gymnastic exercises and melodica performance by the children. 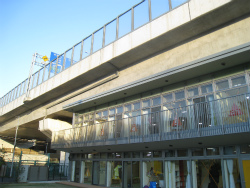 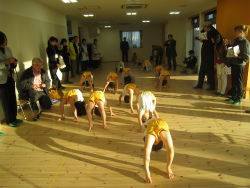 At the end of the tour, the journalists visited P’s Nursery situated on the 6th floor of the JR Tsurumi station building.  Ms. Aika Yasunaga, the president of the nursery, talked about the convenience of the location, its design to make effective use of the limited space, gardening space on the roof, and their regular suburbs activities for children.

The journalists talked with children playing in the nursery and conducted interviews with parents who came to pick up their children. 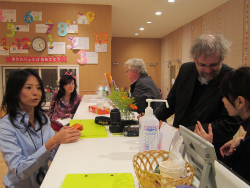 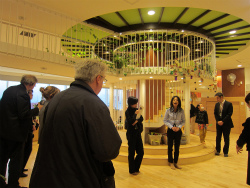