FPCJ conducted a press tour to Sosa City, Chiba, hosted by Chiba prefecture. The tour had twelve journalists from China, Taiwan, France, Spain, Brazil and the US.
(Click here for more details on the tour).

The participants who headed to Chiba from Tokyo, first arrived at the office of Yokaichiba Planters’ Association. Mr. Yasunori Ota, Mayor of Sosa City and Mr. Hiroshi Uno, Chairman of Planters' Association of Chiba Pref. gave welcome speeches. Then, Mr. Yuzaburo Nakano, Director of Agricultural Production and Sales Promotion Division, Chiba Pref., gave a presentation on the current picture of the prefecture’s plant industry and how Chiba Prefecture supports it. A presentation by Mr. Masahiro Kato, Chief Researcher of Chiba Prefectural Agriculture and Forestry Research Center followed. He explained their research aiming to facilitate and ensure the export of plants abroad. Thanks to their research, some effective methods of eliminating nematode worms were consolidated.

Journalists came up with various questions. For example: the history of Japan's culture of plants, the conditions to be certified as a licensed tree trainer of the prefecture, or if there are any political effects on the business with China, an important market for the industry.

“I would like to go anywhere around the world if invited” said Mr. Makoto Ishibashi wearing his livery coat and “Jikatabi”, a pair of rubber‐soled socks with the big toe separate and a twisted brow band on his head. He has already been invited abroad several times to take care of plants. At his farm, we were able to see his demonstration. Surprisingly, he was touching the plants with his bare hands even though we unfortunately had cold rain. One of the participants asked, “Do you wear gloves only in winter?” and Mr. Ishibashi replied, “I never wear gloves because of my master’s lesson. I need to feel the plant with my bare hands”. All the participants were impressed by his craftsmanship 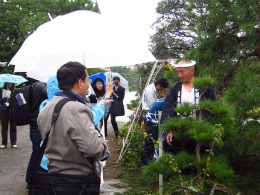 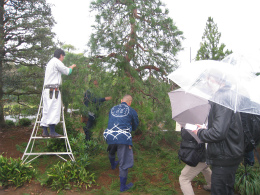 At the farm, Mr. Yoshihiro Udono demonstrated a technique called “Nomiire”, bending a branch by wounding it with a chisel. ”The participants were impressed finding Mr. Udono preciously treats his plants as if his own children. Of course, many of his plants are shipped abroad. He said “I would like to continue being an arborist producing beautiful plants, not an exporter.” 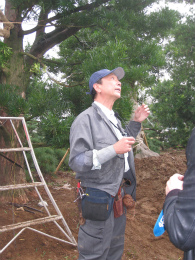 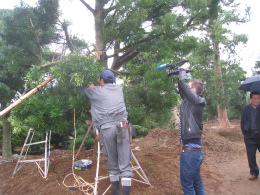 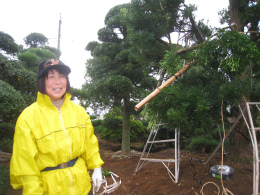 After observing the traditional techniques of the two arborists, the participants visited Mr. Ebato’s company. He is one of the biggest plant exporters in Chiba. He demonstrated washing off of the roots of the plant to pass quarantine. The scenery was very dynamic. The plant was hung high from a crane and the root was hit by a jet of water.
There were also many bonsais on his farm. “This will be shipped to China and this is to Taiwan” he explained. It showed that his business is growing globally. 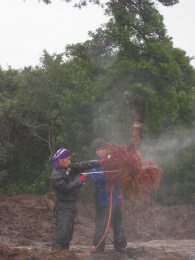 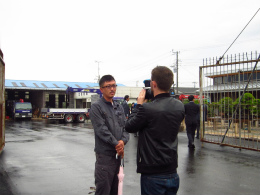 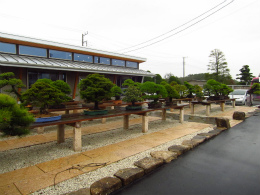 Welcomed by the podocarp which is designated as “100 individual finest and most original examples of Macro bonsai of Chiba” and is more than 500 years old, the participants interviewed two young successors who are cousins.
They decided to be involved in the industry, which still has severe problems including lack of successors, even though the industry is gradually being revitalized by its rising exports. “I do not want to end our family business’s history which has continued for so many years” strongly said Mr. Yoshio Sato. “I would like to introduce more beautiful Japanese plants.” He is eager to expand his business both domestically and internationally.
Mr. Yoichiro Sato, once seriously concerned about his future of being involved in the industry, said “However, for me, I found that nothing else but inheriting my family business is my right path. I would like to make the most of this time when exporting is showing some promising outcomes. I believe there are more things to be done to get better results.” 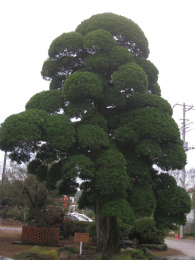 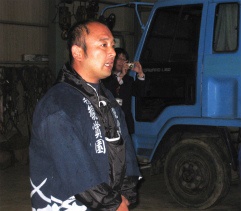 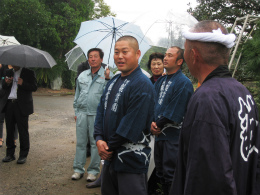