FPCJ conducted a press tour of CHIKYU, a cutting-age scientific research vessel featuring the most advanced drilling capacities in the word (7,000m below in the sea). This tour had 21 journalists from China, Taiwan, Korea, Bangladesh, France, Germany, Switzerland, Italy, Spain, Arab countries, US, and UK. 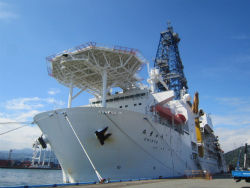 （1) Filming/Photographing the exterior of the CHIKYU

The tour started with filming and photographing the exterior of the CHIKYU at Shimizu Port, Shizuoka prefecture. The journalists then had a briefing on the structure of the vessel and its drilling missions by Mr. Shin’ichi Kuramoto of the Japan Agency for Marine-Earth Science and Technology (JAMSTEC).

（2) Tour inside the vessel

The journalists then toured inside the CHIKYU. On the bridge, the captain demonstrated how to control the vessel and explained about the DPS system which enables the CHIKYU to stay in the same place even in inclement weather including typhoons. At the drill floor, many questions such as the features of drills that can dig thousands of meters and the risks of the digging operation in Nankai Trough Seismogenic Zone were raised by the journalists. The tour participants then moved to the research area to film geological materials, such as an earthquake fault recovered from the Tohoku plate boundary which caused the Great East Japan Earthquake in 2011, and the researchers working in the laboratory. At the helicopter deck, every journalist has struggled to take pictures of the derrick (drill tower) which is more than 120meters above the sea surface. 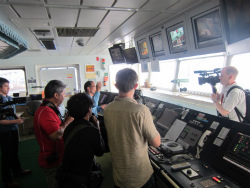 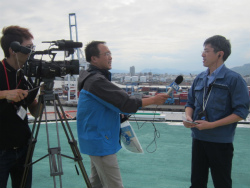 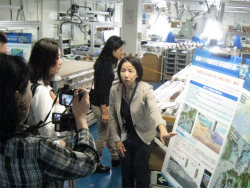 In the Q&A session, questions were focused on the issues of the elucidation of the mechanism of earthquake and its prediction which are expected from CHIKYU’s Nankai Trough Seismogenic Zone Experiment. One journalist pointed out, “It seems very difficult to achieve a reliable prediction of earthquakes”. Mr. Kuramoto, though admitting that the data required for prediction is insufficient at the present stage, replied, “We are expecting that there will be new scientific discoveries through our experiments in the Nankai Trough which will enable us to visualize the mechanism of earthquakes. In the future, we aim to be able to predict earthquakes like we watch the weather forecast”. 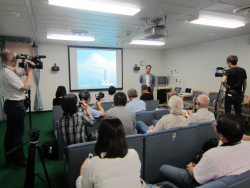