-Investigating the Mechanism of Major Earthquakes on Unexplored Seabed- 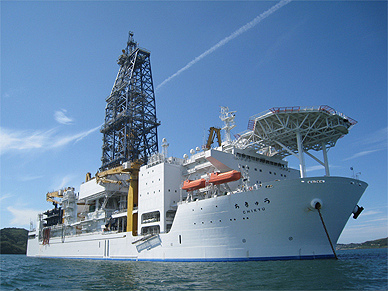 CHIKYU (“Earth” in Japanese) operated by the Japan Agency for Marine-Earth Science and Technology (JAMSTEC) is a cutting-edge scientific research vessel featureing the most advanced drilling capabilities in the world (7,000m below the sea floor). The completion of CHIKYU in July 2005 made it possible to reach the mantle and seismogenic zones of major earthquakes, where no one has ever explored before. (Picture right: ©JAMSTEC/CDEX)

CHIKYU currently acts as the principal vessel of the Integrated Ocean Drilling Program (IODP), in which 26 countries including Japan, the United States and European countries are taking part. CHIKYU has so far conducted 17 expeditions to seismogenic zones to investigate the mechanism of major earthquakes. The vessel also has the goal of revealing life in the Earth's crust, investigating the record and causes of global environmental change, and reaching the mantle. Moreover, in March 2013, CHIKYU successfully extracted natural gas from deposits of methane hydrate, a frozen gas known as “flammable ice,” off the coast of Aichi Prefecture. This was a world-first achievement of this kind.

CHIKYU, which is scheduled to leave for another expedition to the Nankai Trough on September 13, will be at anchor from mid-August to early September at Shimizu Port, Shizuoka Prefecture. This press tour offers an opportunity to explore the inside of the vessel and learn about its ambitious missions, achievements so far, and future research plans.

*FPCJ plans, conducts and hosts this tour. While the participants need to bear part of the expenses, the tour is not profit-oriented business.

-“A laboratory floating on the sea,” exploring the mysteries of the Earth- 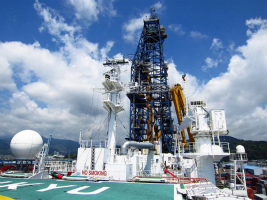 CHIKYU is the world’s largest drilling vessel, measuring 210m in overall length and weighing 57,000 tons. The drilling derrick installed on the vessel towers 130m from the bottom of the hull. CHIKYU adopted the riser drilling method, which is employed in offshore oil and gas fields, for scientific research purposes for the very first time in the world. The vessel has a four-story laboratory, which includes such facilities as a “core” cutting place, a X-ray CT scanner laboratory, and a QA/QC sampling room.

◎The tour will have a briefing on the outline of CHIKYU and then explore the vessel including its bridge, research laboratory, helicopter deck and other parts. 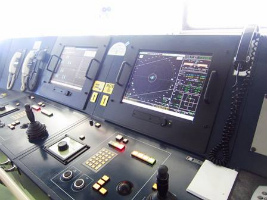 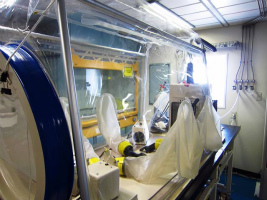 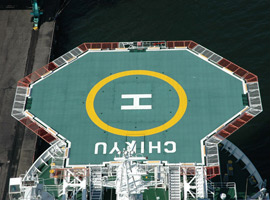 -Revealing the mechanism of majr earthquakes and tsunami- 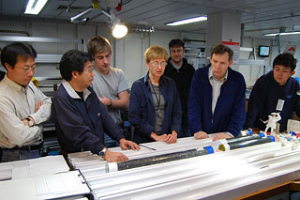 The Nankai Trough Sesmgenic Zone Experiemnt (NanTroSEIZE) is a complex ocean drilling project conducted over several years with multiple expedition teams of scientists from all around the world. NanTroSEIZE attempts for the first time to drill, sample, and instrument the earthquake-causing, seismogenic portion of the Earth's crust, where violent, large-scale earthquakes have occurred repeatedly throughout history.(Picture left: ©JAMSTEC/IODP)

Since 2007 CHIKYU has drilled areas near the Nankai Trough nine times and confirmed the scars of large-scale submarine landslides that might have caused tsunami. After the Great East Japan Eqarthquake, CHIKYU conducted research in the sea off Tohoku. In January 2013, a seismometer and a strain gauge which had been installed by CHIKYU at a point 1,000 meters down from the sea bottom were connected with the DONET (Dense Oceanfloor Network System for Earthquakes and Tsunamis) of JAMSTEC; the data obtained from this observational equipment were successfully received in real time ---another world-first. It is expected that prelimnary signs of an earthquake, hardly detectable in the past, will be noticed early.

In the tour, Dr. Shin'ichi Kuramoto, Deputy Director, Planning and Coordination Department, Center for Deep Earth Exploration (CDEX), JAMSTEC, which coordinates the project, will give an outline of the past achievements of NanTroSEIZE research, and another expedition to the Nankai Trough that will start on September 13. He will also talk about the research in the sea off Tohoku after the Great East Japan Earthquake.

The Nankai Trough is a large-scale and very active earthquake-prone zone off the Kii Peninsula, central Japan. It is known that big earthquakes with a magnitude of 8 or so on the Richter scale have occurred in parts of the Nankai Trough at intervals of about 100 to 200 years. It is feared that an ultra-large earthquake with a magnitude of 9 on the Richter scale might occur there in the near future. (©JAMSTEC/CDEX)

14:00-14:45 Briefing on CHIKYU, the Nankai Trough Seismogenic Zone Experiment, and research on the Great East Japan Earthquake, followed by a Q&A session

3. Cost: 5,000 yen per person including transportation

(2) You are recommended to wear flat-heeled shoes and sensible clothes, and in particular not to wear high-heeled shoes or skirts.

(3) You are requested to bring your Gaimusho Press Registration Card with you on the tour.

(4) You are requested to pay for your lunch on the tour.

(5) FPCJ will not be liable for any inconvenience, trouble or accident that might occur during the tour.