The Foreign Press Center/Japan arranged interviews on "Outlook for the Japanese economy” and "Japanese newspaper's effort on digitization”, at the request of Mr. Ruud Kreutzer from De Telegraaf, the largest daily newspaper in the Netherlands.

For “Outlook for the Japanese economy”, Mr. Kreutzer interviewed Mr. Heizo Takenaka, Director of the Global Security Research Institute, Keio University, on the key points of the three arrows of Abenomics, which are said to be the last chance for Japan to revive its economy, and its implementation effort. Professor Takenaka said that one of the most important ideas among these is fiscal consolidation.

For “Japanese newspaper’s effort on digitization”, Mr. Kreutzer visited the Asahi Shinbun and interviewed Ms. Hiromi Onishi, executive officer of the digital division, about their efforts on contents production and the profit outlook.
Mr. Kreutzer is interested in the digitization of media and its situation today, as newspapers in Japan have a very high circulation level in the world. He eagerly asked questions about the future of paper-based media. In addition, he exchanged views with Ms. Onishi about how to get the younger generations to read newspapers at a time when the existing subscribers are aging.

The article based on this coverage was published in the issue of May 23rd.
(click here for the article) 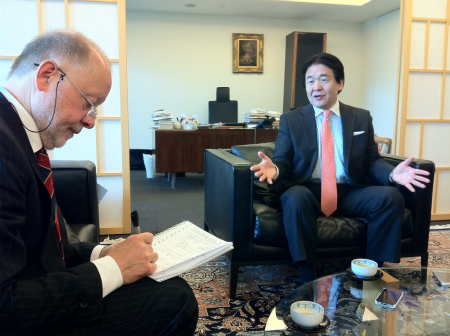 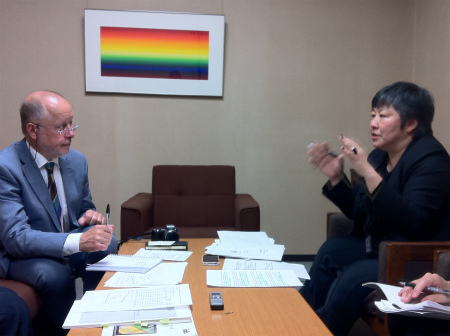