With the winter tourism season approaching, a press tour to Sapporo was held to promote the safety and beauty of the city worldwide. The tour was hosted by the City of Sapporo and planned and operated by Foreign Press Center Japan. Ten foreign correspondents from eight countries and regions (China, Germany, Hong Kong, Singapore, South Korea, Taiwan, the US, and Vietnam), including four which are among the most common for visitors to Sapporo, joined the press tour, which covered the attractions of Sapporo including winter events, hot springs, one of Japan’s most famous night views, and a new food trend. 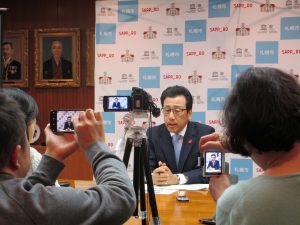 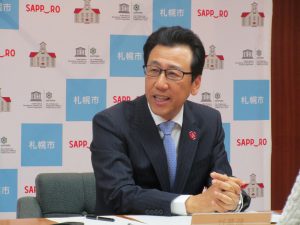 Mayor Akimoto started by explaining the current state of recovery from the September earthquake, stating, “Through the media, I would like to let people know that most residents’ lives have returned to normal, and transportation, accommodations, and restaurants have been restored to a condition suitable to welcome tourists.” He also commented on the necessity of a system to provide support to foreign tourists during disasters: “The earthquake caused blackouts, and tourists could not gather information due to being unable to charge their smartphones. We are considering ways to solve this problem, such as making it possible to charge smartphones using the emergency power at temporary evacuation shelters.” The mayor closed by describing Sapporo’s winter attractions, saying, “Sapporo is a town of powder snow. After enjoying winter sports, visitors can also enjoy hot springs, the night view, and delicious food. The Sapporo Snow Festival scheduled for February next year will be the 70th such festival, and a number of attractions are being planned to mark the occasion.”

"Overcoming the earthquake in Sapporo, tourism gradually returns to normal"

"Sapporo Mayor: Hokkaido has recovered from the effects of the earthquake"

"Maker of iconic white choc in the pink"

Photos from the Tour

*For details on the tour, please see the tour announcement

◆The first day of annual events marking the start of winter in Sapporo,

Sapporo White Illumination and the Munich Christmas Market in Sapporo, both popular with tourists. 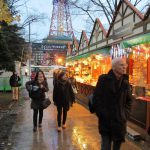 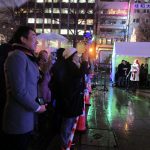 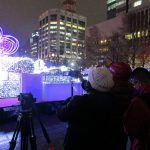 ◆The tour visited Nijo Market, with foreign employees serving customers and menus and labels available in multiple languages, to see efforts to ensure tourists can enjoy shopping their as well. 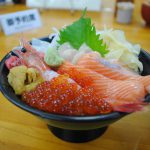 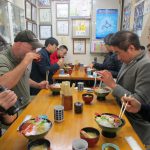 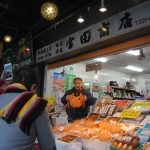 ◆At Jozankei Hot Springs, Mr. Yamada, secretary-general of the Jozankei Tourist Association, showed the tour Gensen Park with its free footbaths, and the Futami suspension bridge, a popular spot for taking pictures of the autumn leaves. 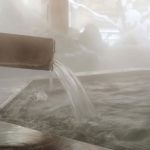 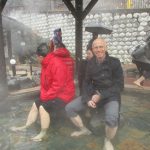 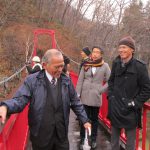 ◆The day after the latest first snow of the winter in 128 years, the group saw the beautiful night view

from the Mt. Moiwa Summit Observation Deck in sub-zero temperatures. 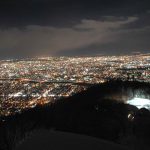 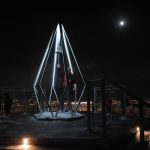 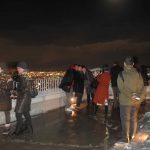 ◆Shiroi Koibito are a very popular souvenir in Japan. The tour spoke with Mr. Ishimizu, president of Ishiya Co., Ltd., and also interviewed Chinese employees working at the duty-free store of Shiroi Koibito Park, which over half the visitors to are foreign tourists. 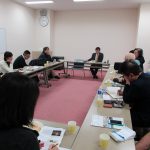 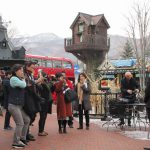 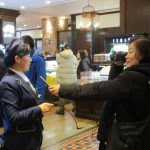 ◆The tour spoke with Ms. Isozaki, a producer at Crypton Future Media,

about the birth of the new Shime Parfait food trend in Sapporo which she has been involved in popularizing. 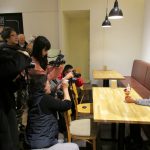 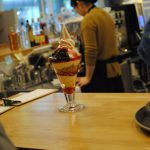 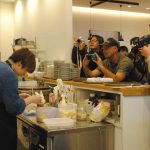 ◆At Guest House Sapporo yuyu, which runs an afterschool program for children that gives the children an opportunity to interact with tourists from around the world, the tour spoke with one of the managers, a 27-year-old, about the significance of youths starting businesses outside Tokyo. 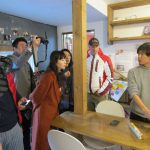 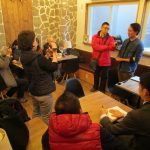 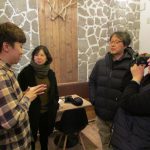